Barely six months ago, the BJP had witnessed a thumping victory in the Lok Sabha election, winning 303 seats of the total 543 seats and in Jharkhand, it was a virtual saffron sweep with the party bagging 11 seats out of 14 in the state. 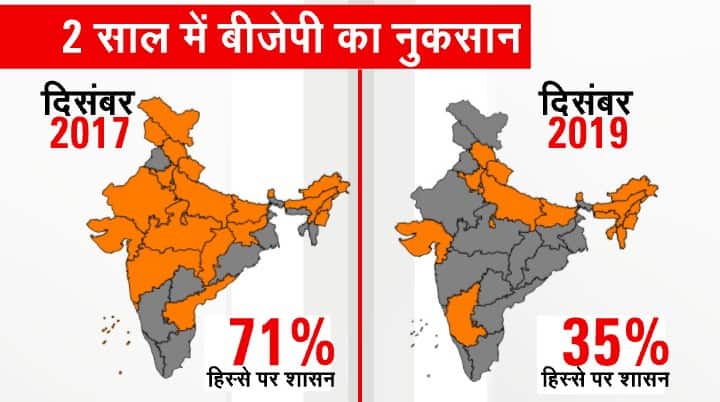 New Delhi: With the Bharatiya Janata Party (BJP) facing a rout in yet another state - Jharkhand, the party has been reduced to only 40 percent Indian states compared to 71 percent back in December 2017. The Jharkhand Assembly election loss is a big blow to the BJP as it comes soon after the Citizenship Amendment Act and a few weeks after the Supreme Court verdict clearing the construction of a Ram Temple in Uttar Pradesh's Ayodhya.

Barely six months ago, the BJP had witnessed a thumping victory in the Lok Sabha election, winning 303 seats of the total 543 seats and in Jharkhand, it was a virtual saffron sweep with the party bagging 11 seats out of 14 in the state.

Before registering an impressive win in the 2014 Lok Sabha election, the party had faced defeats in three big states in the Hindi heartland - Rajasthan, Madhya Pradesh and Chhattisgarh.

Maharashtra and Haryana assembly election results were another shocker to BJP as the party was expecting to form government in both the state. While it somehow managed to form an alliance government in Haryana, it couldn't save it three-decade-old ties with Shiv Sena, who marched ahead and joined hands with Congress and NCP to come into power.

Notably, Maharashtra is the second most important state after Uttar Pradesh in terms of Lok Sabha seats.

Now the party has been reduced to nearly 40 percent Indian states. This is in huge contrast with the party holding barely 7 states in early 2014 and then marching on to form government in 21 states by 2018. In fact, BJP's show had literally turned the entire country saffron in colour.

Post the steep rise, the party lost its three forts - MP, Rajasthan and Andhra Pradesh and had a close shave in Prime Minister Narendra Modi's bastion Gujarat. In Andhra Pradesh, the TDP broke its alliance with BJP while Jammu and Kashmir is now an Union Territory under a Lieutenant Governor. The ally trouble for BJP didn't stop here and it went on to hurt the party like never before as in Jharkhand, All Jharkhand Students Union (AJSU), who was BJP's partner, too decided to go solo in the assembly election.