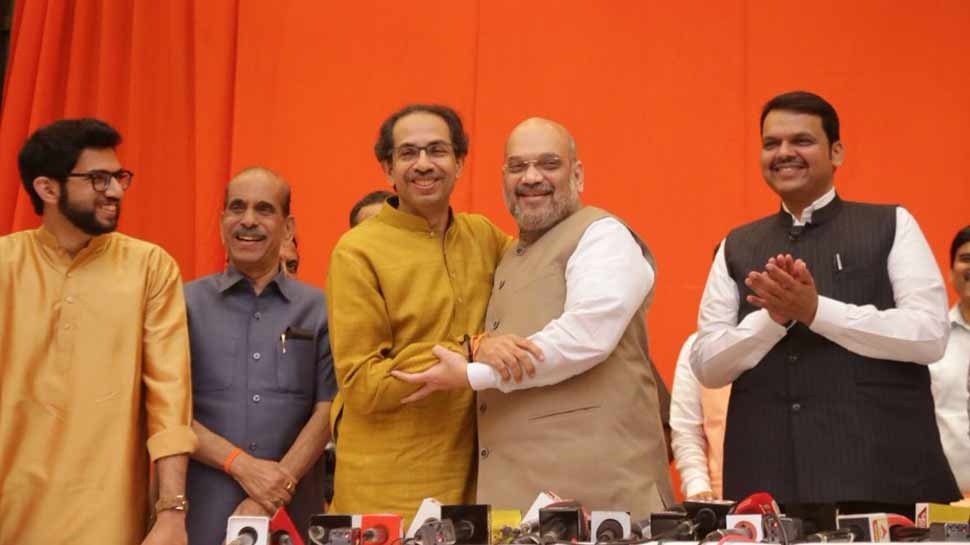 Shiv Sena MP Sanjay Raut on Tuesday said that the proposed meeting between Shiv Sena and BJP leaders, which was scheduled to take place at 4 PM, has been cancelled. Raut said that the meeting has been cancelled by Sena chief Uddhav Thackeray. Raut once again reminded the BJP of the 50:50 formula agreed between the two sides and stressed that there should be an equal distribution of power and portfolios between the Sena and BJP.

The senior Shiv Sena claimed that the discussions over 50:50 formula were held between Sena supremo Uddhav Thackeray and BJP president Amit Shah in the presence of Maharashtra Chief Minister Devendra Fadnavis before Lok Sabha election. Raut also claimed that Fadnavis is wrong in saying that there was no agreement on 50:50 formula as Shah had assured for 50:50 sharing on CM's post during Lok Sabha election.

"I don't know what the CM has said. If he is saying that the '50-50 formula' was never discussed, then I think we need to change the definition of truth. What was discussed, regarding the issue the CM is talking about, is known by all. The media was there," Raut said.

Earlier on Tuesday, Fadnavis said that he will be the next chief minister of Maharashtra and denied having any talks on 50:50 seat-sharing formula with Uddhav Thackeray's party.  "I assure you that this will be a Bharatiya Janata Party (BJP) led government. I will be the CM for the next five years, there is no doubt about it," Fadnavis said.

It is to be noted that the results of Maharashtra Assembly election were declared on October 24 but there is still no confirmation on government formation in the state. Though the BJP and Shiv Sena had a pre-poll alliance, the two parties are engaged in a tug-of-war over the chief minister's post. Shiv Sena has demanded that both the parties should be allowed to form the government for 2.5 years each. However, the BJP is not ready to bow down before Sena's demands.

Sources told Zee Media that BJP has chalked down another plan to form government in the state with the help of smaller parties and the independents. It is expected that Fadnavis would meet Maharashtra Governor BS Koshyari on Wednesday to stake claim to form the government. The party will present a list of its MLAs and other winning candidates who are helping it in front of the Governor to seek an invitation to form the government. If the plan works, Fadnavis, along with other leaders, will take oath on October 31.