Meanwhile, Sai Praneeth--the other Indian in the fray--too crashed out of the tournament after going down 12-21, 13-21 against Zhao Jun Peng of China in 33 minutes. 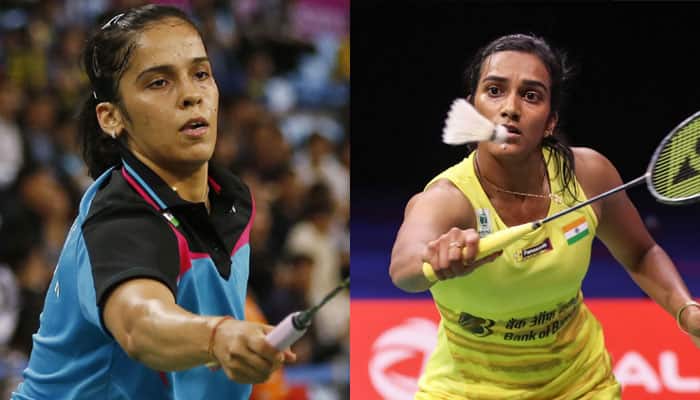 Rio Olympic silver-medallist PV Sindhu produced a rich vein of form as she swept aside American shuttler Beiwen Zhang in straight games to book her place in the second round of the ongoing All England Open badminton championship in Birmingham on Wednesday evening.

The 24-year-old badminton star from Hyderab hardly broke a sweat as she eased past Zhang 21-14, 21-17 in a one-sided opening round clash of the women's singles event that lasted 42 minutes.

With the win, Sindhu has now set up a clash against Sung Ji Hyun of Korea for a place in the quarter-final of the tournament.

Meanwhile, ace Indian shuttlers Saina Nehwal and Kidambi Srikanth continued their dismal form as they suffered straight-games defeat in their respective first-round matches to crash out of the All England Open.

London Olympic bronze-medallist Nehwal was completely decimated by former world number one Akane Yamaguchi of Japan 11-21, 8-21 in the opening clash that lasted just 28 minutes. The defeat was Nehwal's third first-round loss in five tournaments she has played this year.

Srikanth, on the other hand, slumped to a disappointing 15-21, 16-21 defeat at the hands of third-seed and reigning Olympic champion Chen Long 15-21, 16-21 in the opening round of the men's singles event that lasted 43 minutes.

Besides them, Sai Praneeth--the other Indian in the fray--too crashed out of the tournament after going down 12-21, 13-21 against Zhao Jun Peng of China in 33 minutes.

In the women's double event, the Indian duo of Ashwini Ponnappa and N Sikki Reddy stormed into the second round after their American opponents Jenny Moore and Victoria Williams retired hurt when the scores read 5-4.

Ponnappa and Reddy will now lock horns with the Japanese team of Misaki Matsutomo and Ayaka Takahashi in the second round.

Meanwhile, Pranaav Jerry Chopra and N. Sikki Reddy suffered a major blow as they knocked out of the mixed doubles' event after suffering a 13-21, 21-11, 17-21 defeat against Chinese top seeds Si Wei Zheng and Ya Qiong Huang in the opening round.

Meanwhile, young Indian shuttler Lakshya Sen cemented his spot in the second round in his maiden appearance of the tournament after clinching a come-from-behind win over Hong Kong's Lee Cheuk Yiu 17-21, 21-8, 21-17 in other men's singles clash that lasted a little less than an hour.

Sen will now square off with former world champion Viktor Axelsen of Denmark for a place in the last-eight.