Rio Olympic silver-medallist PV Sindhu looks to seal an elusive gold at the BWF World Championships as she takes on Japanese star and world number three Nozomi Okuhara in the summit showdown of the women's singles event of the prestigious tournament in Basel, Switzerland on Sunday. 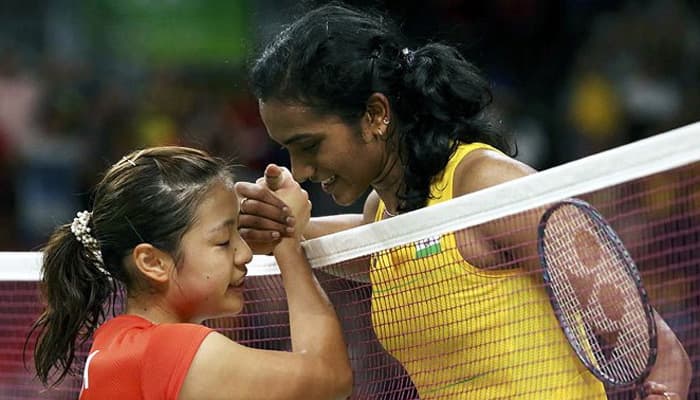 # With the win, Sindhu becomes first Indian player ever to seal a BWF World Championship gold.

# Sindhu is now just four points away from her maiden title at this tournament. She is currently leading 17-6 against the Japanese star.

# Sindhu struck a fantastic smash which the third-seed fails to collect. The Indian now maintains a ten-point advantage over Okuhara in the second game. The score reads 14-4.

# Sindhu grabs four consecutive point to further extend her lead to 9-2 against the Japanese. The Indian first hit a brilliant half-smash to rattle Okuhara before she attacked Okuhara's deep backhand corner.

# Okuhara bounces back to draw the level in the second game before Sindhu once again takes the lead 5-2 with a brilliant smash.

# The Indian shuttler continues her dominance in the second game as well as takes an early 2-0 lead against Okuhara.

# Sindhu wins the opening game against Okuhara 21-7 in 16 minutes.

# A brilliant rally between the Indian shuttler and the world number three. Okuhara uses a drop shot, but Sindhu fails to collect it. The score reads 18-5 in favour of the Rio Olympic silver-medallist.

# Okuhara has made a plenty of unfoced errors while Sindhu is using her height to play the attacking shots. The score now reads 14-2 after the Indian shuttler grabs three straight points.

# At mid-break, Sindhu is maintaining a lead of 11-2  against her Japanese opponent in the opening game.

# A sheer display of dominance from the Indian shuttler as she bagged eight straight points to extend her lead to 8-1 against Okuhara.

# Sindhu grabs four back-to-back points to make it 4-1 against the world number three in the opening game.

# Okuhara gets the first point before Sindhu bounces back to draw the level 1-1.

# Sindhu and Okuhara are out in the court and warming up ahead of the summit showdown.

# Meanwhile, the Japanese duo of Mayu Matsumoto and Wakana Nagahara clinch women's doubles title after sealing a thrilling 21-11, 20-22, 23-21 win over  Yuki Fukushima and Sayaka Hirota in the final which lasteed one hour and 25 minutes.

# The much-anticipated final clash between the Sindhu and Okuhara will begin shortly.

#  Sindhu has won two back-to-back silver medals in the last two editions of the tournament and she will be keen to become the first Indian to win a gold medal in the tournament heading into the final clash.

# The duo has faced each other twice at the BWF World Championships, with both winning a match each.

# Sindhu and Okuhara last met each other in this year's Indonesia Open in July when the Indian shuttler emerged victorious in straight games.

Sindhu booked her place in the final of the tournament by easing past fourth-seed Chen Yu Fei of China 21-7, 21-14 in the one-sided semi-final match of the tournament. With the win, Sindhu scripted history by making it to the final of BWF World Championships for the third consecutive time.

Okuhara, on the other hand, bounced back strongly from the first game down to eventually clinch a 17-21, 21-18, 21-15 win over seventh-seed Ratchanok Intanon of Thailand in another last-four match that lasted one hour and 23 minutes.

Heading into the summit showdown, the Indian shuttler will look to avenge her final defeat to Okuhara in the epic 2017 World Championships final which went on to become the longest women's singles gold medal match in the history of the event. Sindhu slumped to defeat at the hands of Okuhara in three games of the match that lasted for 110-minute.

The duo has faced each other 15 times in their badminton career, with Sindhu leading the head-to-head series between them by 8-7.