Sindhu hardly broke a sweat as she eased past her American opponent 21-14, 21-6 in a one-sided round-of-16 that lasted just 34 minutes. 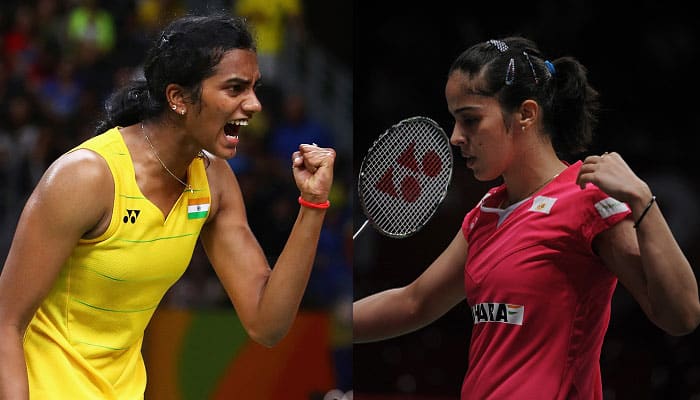 Ace Indian shuttler Saina Nehwal suffered a major blow as she knocked out of the ongoing BWF World Championships after going down fighting against Denmark`s Mia Blichfeldt in the round-of-16 of the tournament in Switzerland on Thursday evening.

After winning the opening game by a margin of six points, eighth-ranked Nehwal failed to capitalise on the same and slumped to a diappointing 21-15, 25-27, 12-21 defeat at the hands of her Danish opponent in a thrilling prequarterfinal clash of the women's singles event that lasted one hour and 12 minutes.

Nehwal was leading by 12-9 in the second game but world number 12 Blichfeldt rebounded strongly and erased the lead to ultimatelty seal the game. In the third and decider game, the Danish star didn't gave any chance to the Indian shuttler to make a comeback and held her nerves to eventually emerge out victorious.

With the win, Blichfeldt has now set up a clash against fourth-seed Chen Yu Fei of China for a place in semi-final of the tournament.

In another women's singles clash, Rio Olympic silver medallist PV Sindhu booked her place in the last-eight of the BWF World Championships after clinching a comfortable straight games victory over ninth-seed Beiwen Zhang of America.

Sindhu hardly broke a sweat as she eased past her American opponent 21-14, 21-6 in a one-sided round-of-16 that lasted just 34 minutes.

While Praneeth too stormed in the quarter-finals with a straight games win over Indonesia's Anthony Sinisuka Ginting, his fellow compatriot Kidambi Srikanth crashed out of the tournament after going down against Kantaphon Wangcharoen in their last-16 clash of the men's singles event of the tournament.

Praneeth took 43 minutes to seal a 21-19, 21-13 triumph over Ginting and set up a clash against another Indonesia shuttler Jonatan Christie for a place in the semi-final.

Srikanth, on the other hand, failed to replicate his decent performance in the tournament so far and went down 14-21, 13-21 against Wangcharoen in 40 minutes.