Looking to break jinx of early round exits at India Open: Ashwini Ponnappa

The world number 23 pair of Ashwini and Sikki shocked world number 18 Li Wenmei and Zheng Yu 22-20, 21-19 to enter the women's doubles second round of India Open. 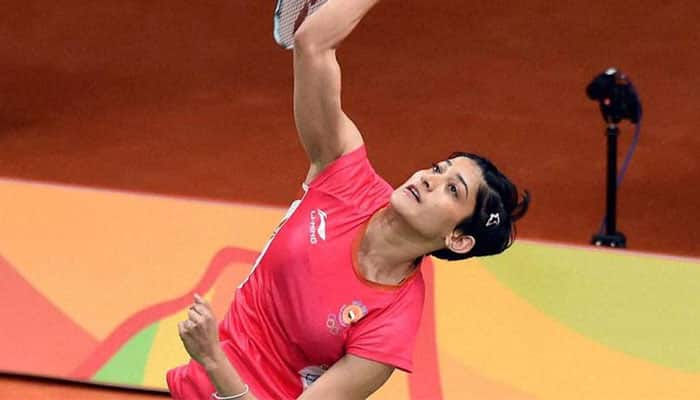 New Delhi: India's doubles specialist shuttler Ashwini Ponnappa Tuesday credited a new training regime for the stunning opening match win at India Open and hoped that she and her partner N Sikki Reddy would be able to break the jinx of early round exits under the guidance of the two new foreign coaches.

BAI had recently roped in the services of specialist doubles coaches Flandy Limpele and Namrih Suroto from Indonesia, who joined the camp following the exit of Malaysian Tan Kim Her.

It seemed to bear results as the world number 23 pair of Ashwini and Sikki shocked world number 18 Li Wenmei and Zheng Yu 22-20, 21-19 to enter the women's doubles second round here.

"We really want to win a couple of tournaments. It has been first and second round exits and we really want to break the jinx. Today's match has given us that confidence. We need a lot more of those matches, consistently entering the quarters and semis is the aim," Ashwini said.

Talking about the match, Ashwini, who won a bronze at 2011 World Championship with former partner Jwala Gutta, said: "We got really good training last week under new coach. We had stretched top players in the past but couldn't convert it to a win, so it gives us a lot of confidence to be able to do that.

"Our coach (Limpele) was a very smart player himself and tactically very good. Definitely, it will help us going forward, there is a lot of intensity. We have lacked in our consistently, we have never really addressed it, so we are working on it now."

Asked what aspect of their game they are working on now, Sikki said, "We are working on shorter swings. Our coaches told us to open up the body and touch and be ready for next points and no need to hit hard and finish it off."

Ashwini, who has won gold and silver at 2010 and 2014 Commonwealth Games respectively with Jwala, said: "So are focusing on our serves and return of serves and it made a lot of difference. Today, we didn't hurry, we were ready for the shuttle and were patient."

Asked if there will be enough time to bring a change in their game so that they can be in best shape for the Olympics, Ashwini said, "There is enough time because even the last week training helped a lot. There was a lot of emphasis on improving on smaller aspects of the game, we could see the difference."

The Indian pair made a lot of early exits and Ashwini said the problem was more technical.

"It was more technical. We actually have not worked much on women's doubles in the last couple of months, we have worked on mixed doubles. So right now the way we are training is good.
"We had morning session of women's doubles and in the evening it's mixed doubles, so have full time devoted on both the format," Ashwin said.