Mona has featured in over 125 Bhojpuri films and acted in several language movies such as Hindi, Kannada, Telugu, Tamil, Oriya and Bengali 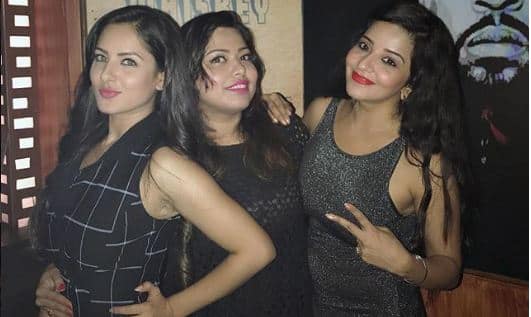 New Delhi: It's never a dull day in Bhojpuri superstar Monalisa's life as the actress has always something to share from her professional and personal life on Instagram. Mona, who is not only rage in Bihar has now taken over the Bengali audience with her web series 'Dupur Thakurpo'. Recently, the actress shared a picture with actress Puja Banerjee and her friend Swagata Nag.

The girl-next-door Monalisa was one of the favourite 'BB 10' contestants and her friendship with Manu Sharma and Manveer Gurjar remained the highlight of the season. Monalisa had a dreamy wedding inside the reality show where the makers called her then-boyfriend Vikrant Singh Rajpoot, who by the way is also a Bhojpuri actor.

Mona, as fans fondly call her, had a proper wedding ceremony inside the 'Bigg Boss 10' house where family members were also called in.

She is currently seen as Jhuma Boudi in 'Dupur Thakurpo' season 2. The sizzling beauty plays Boudi's character in the popular Bengali web-series which is streamed on Hoichoi.