Monalisa is a fitness enthusiast and recently shared a post-workout picture which is making fans go berserk.

New Delhi: Popular actress Monalisa is an internet sensation and has a mammoth fan-following. The actress has over 1.6 million fans on Instagram and her pictures and videos often go viral. Fans adore 'Mona' and shower her pictures with compliments, flooding the comments section. The actress is a fitness enthusiast and recently shared a post-workout picture which is making fans go berserk.

The actress's fans are going gaga over her. Check out some comments here: 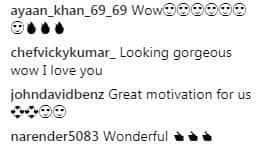 The actress made her television debut with the supernatural show titled 'Nazar'. Monalisa plays the role of an evil force (daayan) in the show and has been showered with immense praises for her performance. Talking about the show, it is doing good on TRPs as well!