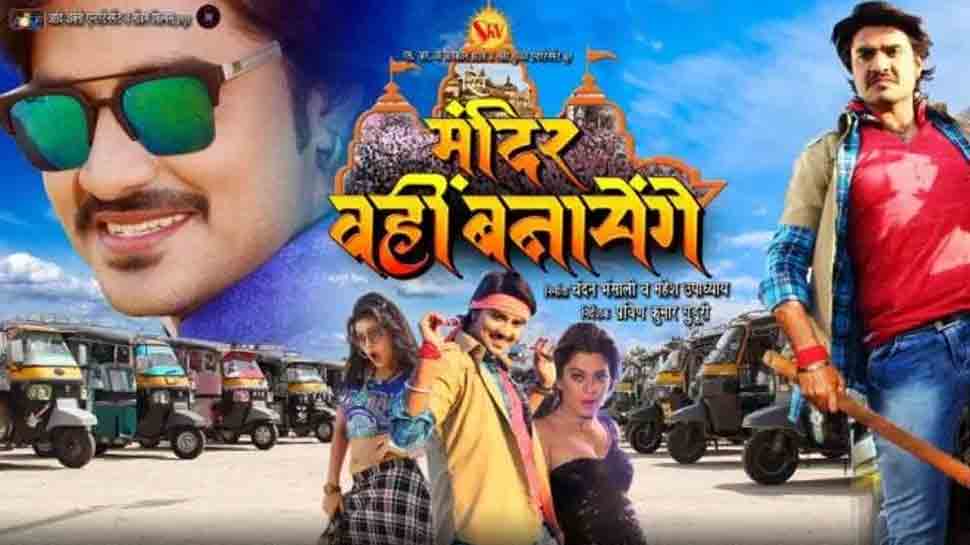 New Delhi: One of the most promising Bhojpuri actors, Pradeep Pandey Chintu and Nidhi Jha-starrer 'Mandir Wahi Banayenge', which hit the theatres on February 8 across Bihar and Jharkhand, has received a bumper opening all over. The film is roaring the Box Office already.

The action-political drama shows Pradeep in the titular role. The actor is seen unmasking those who deliberately politicise the temple issue.

It was speculated that 'Mandir Wahi Banayenge' will give rise to unnecessary debates upon its release; however, nothing controversial was found once the film got screened. In fact, it has come out to be a total commercial film, in Pradeep Pandey Chintu's Bhojpuri style.

The film has been directed by Praveen Kumar Guduri and produced by Chandan Bhansali and Mahesh Upadhyay. Nidhi Jha stars opposite Chintu in the actioner. Sushil Singh, Samarth Chaturvedi and others feature in supporting roles.

The story of 'Shiv Mandir Wahi Banayenge' has been written by Rajkumar R. Pandey

Actors like Sushil Singh, Anoop Arora, Maya Yadav, Prakash Jais, Krishna Kumar, Prem Dubey among others also feature in the film. It is co-produced by Ram Mishra and Shankar Shukla. Madhukar Anand and Chhote Baba have given the music while Mahesh Venkat has done the cinematography.

Action sequence and stunts have been performed under the guidance of Hira Yadav. Kanu Mukherjee, Pappu Khanna and Ramdevan choreographed the dance numbers. The lyrics of songs were penned down by Pyare Lal Yadav, Shyam Dehati, Pawan Pandey.