Much like all fans, Tiger Shroff's rumoured girlfriend Disha Patani is also in awe of the War trailer! The actress commented on Tiger's Instagram post and was all praises for him.

New Delhi: The power-packed trailer of Hrithik Roshan and Tiger Shroff starrer 'War' was unveiled recently and fans are already calling it a blockbuster film. Featuring high-octane action sequences in picturesque locations, the trailer garnered mammoth views as soon as it was released. Also starring Vaani Kapoor, 'War' is one of the biggest releases this year and is high on the buzzword.

Much like all fans, Tiger's rumoured girlfriend Disha Patani is also in awe of the trailer, as well as her beau! 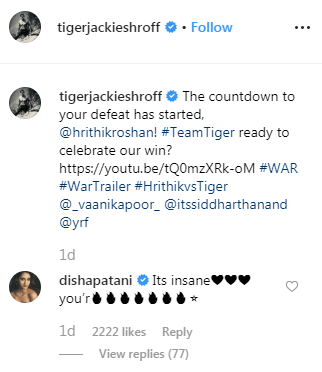 Well, that comments shouts out admiration like nothing else!

Disha and Tiger are often spotted hanging out in Mumbai and paps never leave a chance to click the dapper duo together. The two are known to be fitness freaks and fantastic dancers as well. Even though the two refer to each other as 'Best Friends', the pictures and frequent outings are proof enough that there is more than what meets the eye.

Coming back to 'War', the film has been helmed by Sidharth Anand and produced by Aditya Chopra. It is set to hit the theatres on October 2.