Shweta Tripathi nails her character with her, girl-next-door looks burdened with her compromised state. 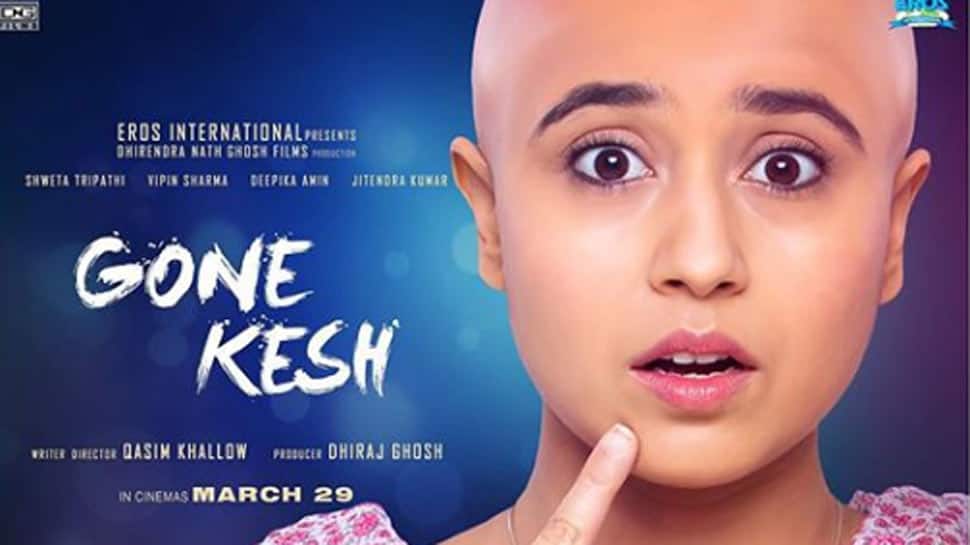 Filmmakers create films to entertain or open the audience's eyes to new ways of life. Some films are so powerful that they can literally change your world. 'Gone Kesh' is one such feeble attempt at a motivational film.

Narrated in a non-linear manner and set in the quaint town of Siliguri, West Bengal, it is the story of Enakshi Dasgupta (Shweta Tripathi), the only daughter of middle-class parents, whose main aim is to get her married. But the issue is, Enakshi suffers from a medical condition called alopecia, an autoimmune disorder that often results in hair loss.

While still in school, for the first time in her life, Enakshi finds it hard to smile as her classmates make fun of the islands (of the brown patch) on her scalp. After trying all sorts of remedies, she settles to sport a wig to hide her bald pate.

Now, despite the wig and working as a sales girl at a cosmetic counter in a mall, her self-esteem is low. She shuns her hobby of dancing, for the fear of being exposed as a "takli".

The plot further trails on a predictable path, which also has a romantic sub-plot, where her tongue-tied college mate Sujoy (Jitendra Kumar) struggles to express himself.

The narrative ends to show the world how she learned that life is not about the hair on your head, it is about the lessons you learn, the friends you find and the difference you can make. Her triumph, through this film, is a message for millions of people around the world suffering from this disease.

The pace of the narrative is slow and the exposition at times tedious. But nevertheless, it's the simplicity and naturalness of the performances that keep you hooked. The filmi-references in the dialogues, bring out the humour quotient in the film.

Shweta Tripathi nails her character with her, girl-next-door looks burdened with her compromised state. Her anger, frustrations and depressive behaviour are all palpable in the film.

Jitendra Kumar as Sujoy is competent and charming. He aptly supports Shweta with a realistic performance.

Vipin Sharma and Deepika Amin as Enakshi's parents are simply effortless and engaging. With their subtle performance, you empathise with them as you can feel their pain.

The highlight of the film is also the soundtrack where the songs, "Bibi", "Dil Dhoondhta Hai", "Main Udhi", "Beimani Sea" and "Nuskha Tarana" are seamlessly integrated into the narrative.

Overall, mounted with a tight budget and despite its shortcomings, "Gone Kesh" as mentioned earlier, is one feeble yet brave attempt.