The message that the film aims to convey in an attempted satirical vein is a serious one. "Jabariya Jodi" talks of "jabran vivah" (also sometimes known as "pakadwa vivah"), meaning forced marriage. 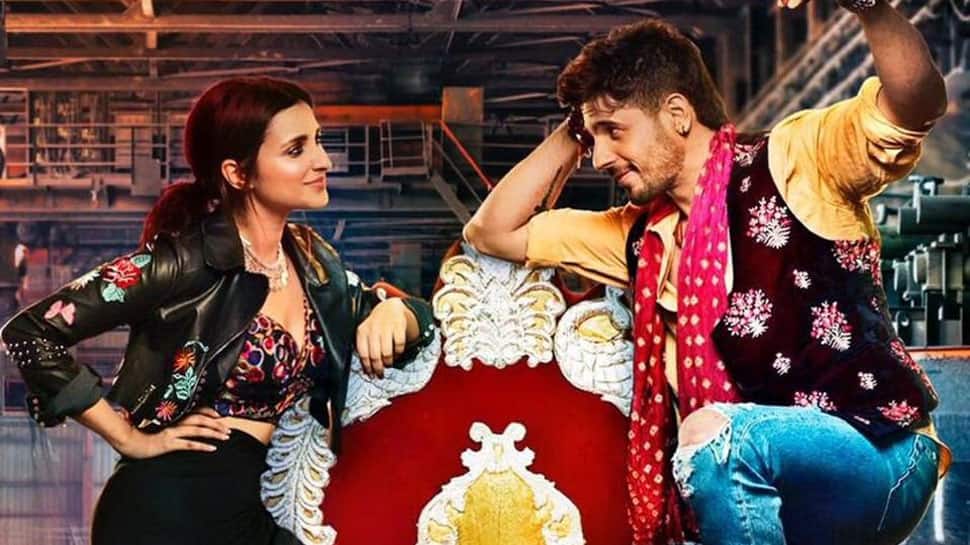 Sidharth Malhotra as a smalltown goon cuts a funny picture. Inadvertently so, because although this film is positioned as a comedy, the intention surely could not have been to raise the sniggers over a miscast hero.

Perhaps Sidharth was looking for a change, from the Karan Johar-patented chocolate boy cliché that launched him with a bang a while back but isn't working anymore. His attempt at an image makeover in "Jabariya Jodi", however, ends up as unconvincing as the film itself. Since he is one half of the star cast in a film that sells itself as a romantic comedy, that's ill begun and half undone.

The other half of this rom-com's lead pair, Parineeti Chopra, has done it again. Among all actresses of her generation and given her proven talent, Parineeti has perhaps done the maximum number of wrong films. She just added another gaffe to the list.

A scrutiny of the film's lead pair at the start of this review is important because the film is ultimately a feel-good love story, beyond tom-toming a smalltown story with a message (the formula is becoming quite a fad lately, isn't it?).

The message that the film aims to convey in an attempted satirical vein is a serious one. "Jabariya Jodi" talks of "jabran vivah" (also sometimes known as "pakadwa vivah"), meaning forced marriage. For the uninitiated, it is a malaise prevalent in heartland India, and a direct -- although unlawful -- outcome of the bigger societal menace that is the dowry system. Grooms with an arrogantly steep demand for dowry are kidnapped by hired goons and forced at gunpoint into marrying girls whose families cannot afford to meet the hefty demands.

Sidharth as Abhay Singh is a bahubali of sorts, who leads such hired operations. His job profile may be criminal, but his cunning father Hukum Singh (Javed Jaffrey) has drilled it into the guy's mind that he is actually doing a service to society by kidnapping the errant grooms and forcing them into marriage. So much so, Abhay dreams of becoming a political bigshot someday.

Abhay's plans in life will be thrown in a tizzy with the resurfacing of his onetime flame Babli Yadav (Parineeti) in his life. They call her Babli Bomb for her feisty personality, and she is quite a contrast to the submissive women Abhay normally sees all around him, at home and in his community. Babli's entry is meant to trigger off a major change in Abhay's way of thinking.

The only memorable effort over the past decade or so on the subject of forced marriages was 2008's outstanding "Antardwand", but that film was a sombre and arty affair, catering to a niche audience. That way, "Jabariya Jodi" must have been a cracker of a concept on paper. The idea to tackle such a serious subject with a twist of humour would appear to give the film its USP.

However, ample imagination is required for such an attempt to leave an impact.

That is precisely where the film falters. Writer Sanjeev K. Jha and director Prashant Singh have come up with narrative and execution that are mediocre at best. The storyline lacks cohesion, and is distracted by inane mush and songs, besides sporadic forced humour. The second half, especially, is crippled by an urgency to turn the film into a love story and little else. This is disappointing, because Abhay and Babli seemed quite engaging as smalltown characters to begin with.

Sidharth Malhotra looks like a city guy trying to essay a smalltown goon in an amateur play, and his effort is further done in by weak characterisation that the screenwriting reserves for Abhay. As a character, Babli gets a raw deal, too. She is overall unconvincing, in the way she has been penned for the plot. Parineeti Chopra constantly struggles to rise above the character.

There are flashes of brilliance from the prop cast. Sanjay Mishra as Babli's father, Javed Jaffrey as Hukum Singh, and Aparshakti Khurana as Babli's friend are a delight to watch, but their performances are hampered by shoddy writing.

'Jabariya Jodi' is a case of jabariya filmmaking. That's not amusing at all.