It speaks about the state of the environment, the destruction of our civilization, the plight of the farmers and of the people living in coastal areas. 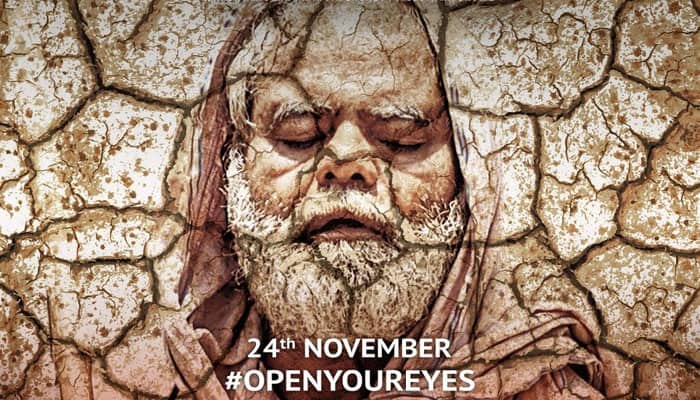 Based on true stories, Kadvi Hawa is the bitter pill that reminds you about the dark winds of change.

Global warming and climate change are real and are caused by human activity. Despite not showing any such activity that is destroying the civilization, the film makes a heartfelt point in a straightforward way.

It speaks about the state of the environment, the destruction of our civilization, the plight of the farmers and of the people living in coastal areas.

The narrative begins with close-up shots alternating between a pair of weary feet trudging a beaten path and a head shot moving with a staff till the old man comes preciously close to a cliff in the barren ravines of Mahua in Bundelkand.

The man is blind and this dramatic start sets the ball rolling to the personal story of Hedu, the father of Mukund, a debt-ridden farmer.

Hedu lives with his son Mukund and his family comprising of his wife and two daughters - Kuhu and Pihu. They live a hand-to-mouth existence. His companion is Anapurna - the Buffalo who he tends during the day.

Hedu lives in constant fear that his son Mukund might commit suicide because of his inability to pay back his loan.

As a concerned father he also heads to a micro-finance bank in a nearest town to check the amount his son, Mukund owes the bank.

When he realises that the debt has doubled due to accumulating interest, he is flabbergasted and frightened as he is aware that his son has no means to repay back the loan.

In his endeavour to clear Mukund's debt and unbeknownst to him, Hedu befriends Gunu Babu, the loan recovery officer, who hails from Odisha.

Gunu is also referred to as Yamdut, the God of death, as there have been cases of farmers committing suicide after being pursued by him.

Hedu guides Gunu in recovering the loans from other debt-ridden farmers. But soon realisation dawns on him, when Mukund goes missing.

Guilt-ridden Hedu then laments, that the winds of change have already engulfed them.

The plot unfolds in a simply witty and satirical manner especially when Hedu interacts with his curious granddaughter Kuhu. This is simply evident in practically every scene with her.

Watching them interact is really amusing, especially when he attributes his source of information to the wind. And when the little girl reports to him that a classmate, contrary to the text books, says that there are only two seasons -- he responds, "There used to be four seasons, but not now. It feels like the winds have an illness."

That's when you realise the plot is stirring towards matters regarding climate change. And with Gunu's predicament, the director deftly ropes in the Odisha cyclone issue.

Sanjay Mishra is the Sun around which the talented supporting cast orbit. He shines brilliantly, with his down-to-earth, natural performance. You experience his anxiety and pain as Hedu. He is aptly supported by: Ranvir Shorey as the frustrated Gunu, Bhupesh Singh as his reticent son, Mukund, Tillotama Shome as his concerned daughter-in-law and Ekta Sawant as his chirpy granddaughter Kuhu. They all add a distinct flavour to their characters.

The background score by Santosh Jagdale is inspiring and hits the right notes. The only song "Main Banjar" which comes in far end of the narrative suitably conveys the essence of the film.

Cinematography by Ramanuj Dutta captures the terrain and the finer nuances of every actor with detailed accuracy.

Overall, sans any entertainment, this slice-of-life film gives us so little to focus on that it wins by default.