Alia and Varun are teaming up for the fourth time for Abhishek Varman's period-drama.

New Delhi: Alia Bhatt and Varun Dhawan are all set to share the screen space together in Abhishek Varman's period-drama flick 'Kalank'. And the duo has been shooting for it extensively. Only last week, Alia and Sonakshi Singh, who also features in the film, shot in Madhya Pradesh's Chanderi and shared few pictures from the set on social media. The girls were seen battling the chilly winters in the photos.

On Friday, Alia and Varun flew off to Madhya Pradesh's Gwalior for the film’s shoot. And the 26-year-old actress shared a picture with her 'Humpty Sharma Ki Dulhaniya' actor on her Insta account. In the picture, both Varun and Alia were all smile for the cameras.

While Alia looked pretty as ever in a grey sweatshirt with a big heart on it, Varun looked dapper in all-blue. Both Alia and Varun completed their looks with sunnies. 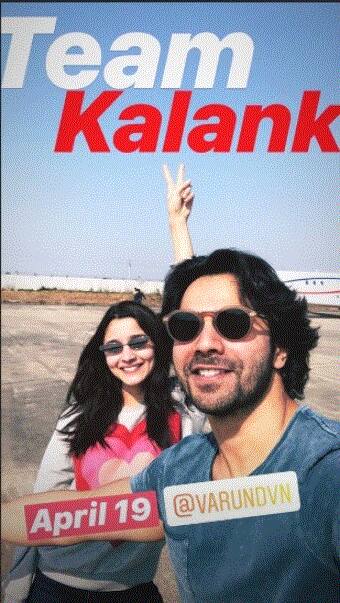 'Kalank’ will be set in the 1940s and reportedly, Madhuri Dixit Nene will be seen playing the role of a courtesan. The movie is being produced by Karan Johar's Dharma Productions. The film also features Sanjay Dutt, Madhuri Dixit-Nene and Aditya Roy Kapur and is slated to hit the screens on April 19, 2019. It also features Kriti Sanon and Kiara Advani in special appearances.

Sonakshi, who plays a poet in the film, will be paired opposite Aditya Roy Kapur while Sanjay Dutt will be seen as Alia's father.

It is to be noted that the 'Kalank' was conceptualised by KJo and his father Yash Johar around 15 years ago. Late veteran actress Sridevi was initially signed for the character role played by Madhuri.