The late actress was honoured with the Best Actress Award (Female) for her performance in 'Mom'. 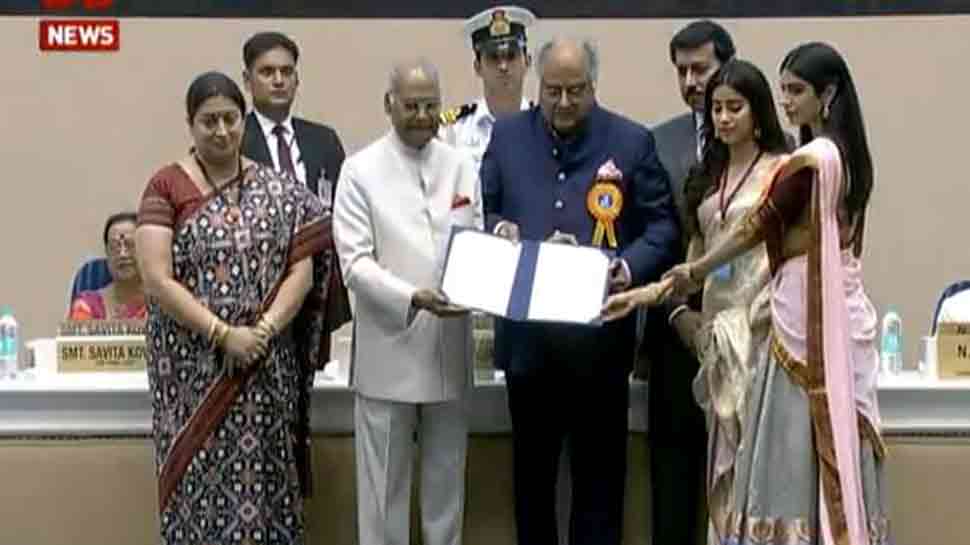 New Delhi: Late actress Sridevi's husband Boney Kapoor and her daughters Janhvi and Khushi Kapoor on Thursday received the National Film Award (posthumously) on her behalf, for her role in 'Mom'. The award was presented by President Ram Nath Kovind.

While late actor Sridevi was honoured with the Best Actress Award for her performance in Mom, late veteran actor Vinod Khanna was posthumously awarded the Dadasaheb Phalke Award.

"She would have been happy, very happy being here. We feel elated, proud that she's been recognised for the hard work she's put in in this film," NDTV quoted Boney Kapoor as saying. "An artist always looks for an honourable honour and there cannot be a bigger honour than National Awards," Boney had told DD News earlier in the day.

Celebrity designer Manish Malhotra shared a photo of Janhvi on his Instagram account saying that she wore her late mother's saree for the occasion'. Check out his post:

The very pretty @janhvikapoor as she goes to Receive Sridevi Ma’am’s Much Deserved National Award for her fabulous performance in Mom’ ... An Actress and a human being and the friend that we all miss every day of our life’s ... #jhanvikapoor in her Mom s personel Saree for this emotional and precious moment .., #kushikapoor #boneykapoor #manishmalhotraworld @mmalhotraworld

'Mom', a revenge thriller, was Sridevi's her last and 300th film.

Meanwhile, the 65th National Film Awards 2018 ceremony today began at Vigyan Bhawan in New Delhi amidst controversy. More than 70 winners of the National Film Awards announced to skip the ceremony after a last-minute announcement that President Ram Nath Kovind would be presenting only 11 awards, a departure from tradition.

Expressing 'surprise' at the '11th-hour questions', Rashtrapati Bhavan said in a statement that the president attends all award functions for a maximum one hour and this was conveyed to the Information and Broadcasting Ministry.

Traditionally, the president gives away all the National Film Awards.