Saaho teaser to be out on July 14, Prabhas' new character poster speaks 'action'

New Delhi: Barely a day before the big teaser launch of 'Saaho', actor Prabhas dropped his new character poster from the film, which gives a hint about the high-octane sequence in the film.

Prabhas is seen in an action avatar, racing off his bike as several other cars behind explode. "Hey Darlings… Only 1 Day to go, are you ready to ride into the world of Saaho?" Prabhas captioned the post. 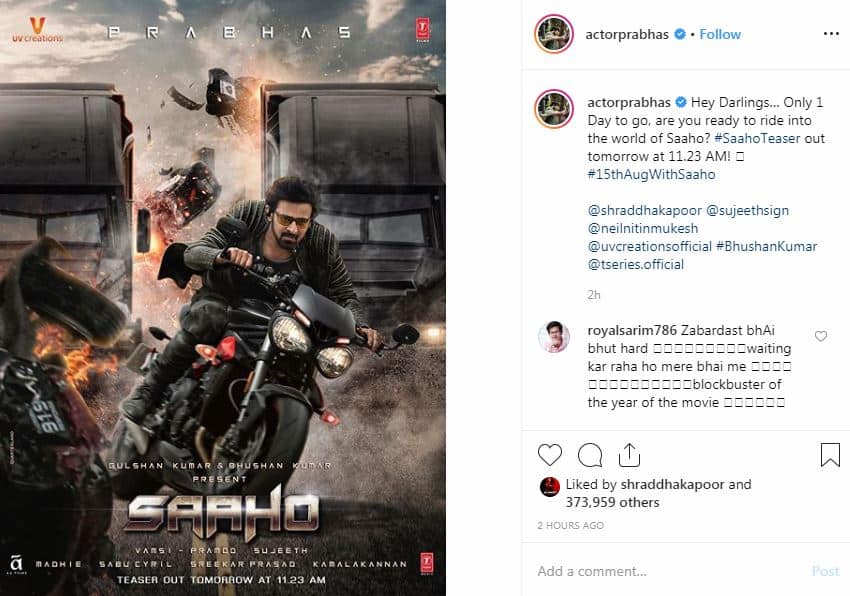 The highly anticipated teaser of the film is set to arrive on June 14.

An action-thriller film, 'Saaho' is written and directed by Sujeeth, and produced by UV Creations and T-Series. The film stars Prabhas, Shraddha Kapoor, Neil Nitin Mukesh, Arun Vijay, Jackie Shroff and others in pivotal roles. It is being released simultaneously in Hindi, Tamil and Telugu languages.

The film has been made on a budget of 300 crore, which includes the use of VFX. The filming for the movie began in August 2017.

The teaser of the film was released earlier in April 2017 along with the release of Prabhas' previous film 'Baahubali 2: The Conclusion', a sequel to 'Baahubali: The Beginning'. The first look of lead actor Prabhas was revealed on 23 October 2017, on the occasion of Prabhas' birthday.