Sanjay, who plays Adheera in 'KGF: Chapter 2', looks terrifying in the latest poster, which was unveiled on actor's 60 birthday. 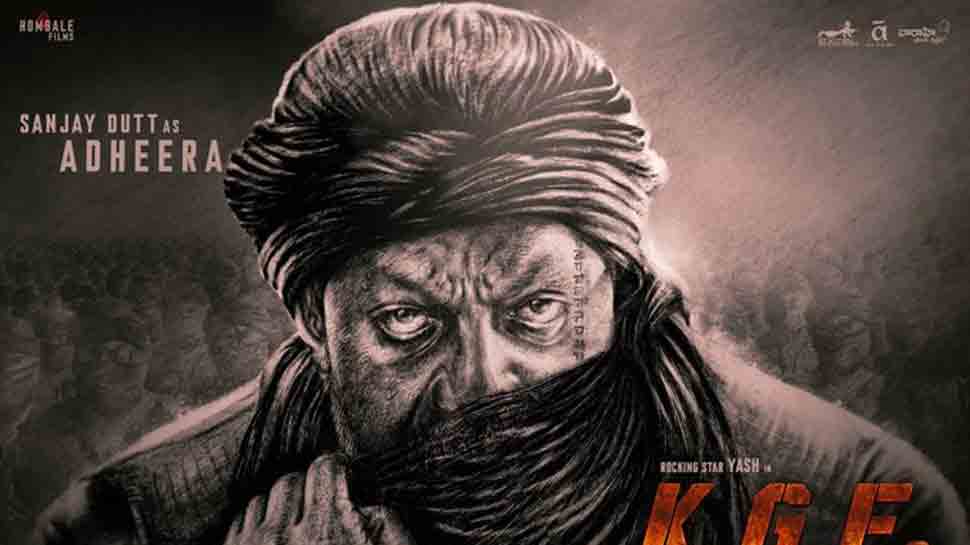 New Delhi: Actor Yash-starrer 'K.G.F: Chapter 1', released in 2018, had wrecked havoc at the Box Office and went on to collect more than Rs 250 crore at Box Office. The film received a pan-India appeal and was dubbed in all major Indian languages.

The film gave a huge competition to Shah Rukh Khan's highly-ambitious project 'Zero' and went on to become one of the most successful films of Kannada cinema. And ever since, fans have been eagerly waiting for the second part to arrive in theatres.

A couple of months back, the shooting of the second installment of the film, titled 'KGF 2', went on floors and it was expected that the makers roped in actors Sanjay Dutt and Raveena Tondon for special roles. Actor Yash too told tabloids that they are in talks with Sanjay. However, nothing officially was confirmed.

Last week, makers released a teaser poster of the film, dropping the first look of the character 'Adheera'. And even though the picture only showed a pair of hands with a dramatic ring, with a lion face, worn by a man, speculations went high that the character 'Adheera' will be played by none other than Sanjay. In addition, the makers announced to drop the first poster of the film, on July 29, i.e., on the birthday of Sanjay Dutt.

On Monday, on Sanjay Dutt's 60th birthday, the makers unveiled the news that the actor will be playing the main antagonist in 'KGF: Chapter 2', along with releasing a character poster, giving a glimpse of his character in the film.

Director Prashanth took to Twitter to share Dutt's look from the film, writing, "Rise from the ashes!!! Presenting to you #motherofallcollisions Happy Birthday @sanjaydutt  Sir#SanjayDuttAsAdheera in #KGFChapter2."

Thank you _ Truly happy and excited to be a part of #KGF as #Adheera@TheNameIsYash #KGFChapter2 https://t.co/65WazgXaS7

The film will mark Sanjay's debut in the southern film industry.

'KGF 2' will be directed by Prashanth Neel and is the sequel to 2018 released 'KGF: Chapter 1'. The film will show the rise of 'Rocky Bhai', played by Yash, who has become the king of Kolar gold mine. It will also focus on power struggly between 'Rocky' and 'Adheera'.

The film will feature Raveena in a prominent role

The film centres around Raja Krishnappa Bairya 'Rocky', born into poverty, who goes on to acquire fame and wealth as desired by his dying mother. It ended with Rocky murdering Garuda and freeing Adheera from the promises he made to his brother Suryavardhan.