This is the last session of the 16th Lok Sabha with elections due by May. 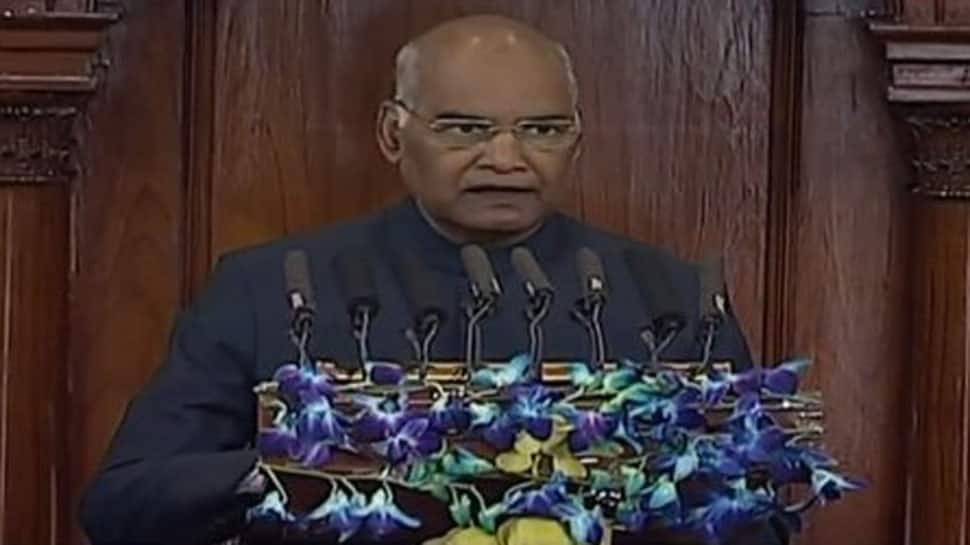 New Delhi: Addressing the joint session of Parliament at the beginning of the Budget Session on Thursday, President Ram Nath Kovind said that the government is committed towards its resolve to work for making a New India and give hope to the people.

This is the last session of the 16th Lok Sabha with elections due by May. The Budget session will end on February 13.

He said the government has been trying to pass the triple talaq bill to empower Muslim women so that they can live a life without fear. He also emphasised that Citizenship Amendment Bill will make it easier to provide Indian citizenship to those who had to take refuge in India after facing oppression somewhere else.

Here are the highlights of President Kovind's address to the joint sitting of the Lok Sabha and the Rajya Sabha:

In the International   context, while India is a staunch supporter of  friendly ties with  all countries, there is also a need to constantly strengthen our capabilities  to tackle any challenges. Through the surgical strike on cross border terror posts, India has shown its new policy and strategy.  Last year India joined the handful of countries that possess the Nuclear Triad capability

Compromising with security needs is not in interest of present and future of the country. New deals in last year, purchase of defence equipment raised morale of defence. After gap of decades, Indian Air Force will include ultra modern Rafale aircraft in its fleet in coming months and strengthen itself

Between 2017-18, more than 12 crore and 30 lakh people of the country undertook air travel. Under UDAAN scheme, prices of 12 lakh seats were reduced for which the middle class of the country could fulfil its dream of air travel

My government believes that eastern Uttar Pradesh, Bihar, West Bengal, Odisha, North-eastern states and the entire eastern region are capable of becoming the growth engine of the country. Hence my government is constantly focusing on improving Railway, highway, waterway and airway infrastructure in the region

GST is a long-term policy and is a boon for the business sector. The taxpayers in the country trust this government. I congratulate the people of our country to adopt GST despite facing several initial hiccups. My government is constantly trying to ammend taxation under GST by keeping in mind advices given on the one nation one tax regime

By widening the scope of direct benefit transfer, over 6 lakh and 5 thousand core rupees have been received by the beneficiaries. People filing IT returns have doubled from 3.8 crore to 6.8 crore in this government. Seventy-three percent of around 15 crore Mudra loan beneficiaries are women

My Government is trying to fulfill its vision to double farmer's income for which it is giving constant assistance to the farmers. The government's priority is to give better opportunity for buying agricultural equipment, seeds and sell their agricultural products of farmers

Under Jan Dhan Yojana, 34 crore people have opened a bank account & almost every family in the country is connected to the banking system. According to an international agency, 55% of the total bank accounts opened between 2014-2017 were opened in India itself

It is the dream of every parent to see their children getting proper education and prosper in life. My Government is working to provide high level professional education for students and hence it is going to establish 7 IIT, 7 IIM, 14 IIIT, 1 NIT and 4 NID

To protect the rights of married Muslim women and criminalise the practice of triple talaq, my government is constantly trying to pass the Bill on Triple Talaq

Under Pradhan Mantri Sahaj Bijli Har Ghar Yojana (Saubhagya) Yojna, 2 crore 47 lakh households have been given power connections so that the poor people are lifted out of darkness.

In the last four and a half years my government has worked relentlessly towards the mission of housing for all. Under this 1 crore and 30 lakh houses were being built. However, before 2014, only 25 lakh houses were built in 5 years

Under ‘Pradhan Mantri Awas Yojana’, the government is also giving interest subsidy of 6.5 percent to persons belonging to low income group. According to an estimate, an individual taking a home loan of Rs 20 lakh for 20 years, would get a benefit of about Rs 6 lakh

Citizenship Amendment Bill will make it easier to provide Indian citizenship to those who had to take refuge in India after facing oppression somewhere else. They were not at fault, they were victims of situations like that

My government is opening new medical colleges, upgrading district hospitals and opening a wellness centre in every major panchayat of the country

2019 is a significant year for India's democracy as country is observing 150th birth anniversary of Mahatma Gandhi. Glad that our country is following the dreams of Gandhiji to build an inclusive society based on ethics and principles. Our nation is moving ahead guided by the ideals of social and economic justice as enshrined in the Constitution by Baba Saheb Dr Bhimrao Ambedkar

Under the Swachh Bharat Abhiyan, more than 9 crore toilets have been constructed. It is the outcome of this mass movement that coverage of rural sanitation, which was less than 40 percent in 2014, has increased to 98 percent

Healthcare is my government’s topmost priority. I am happy to inform you that the benefits of government’s schemes are reaching poorest of the poor.

These kendras provide more than 700 medicines at very cheap rates

Under Pradhanmantri Bharatiya Jan Aushadi Yogna, over 4,900 jan aushadi kendras have been opened in over 600 districts

My government started the Ayushman Bharat scheme that has helped several poor families in under affordable healthcare. In last 4 months more than 10 Lakh poor people availed health benefits in hospitals under this scheme

Under Ujwalla Yojna, over 6 crore gas connections have been given till now

The country was going through a phase of uncertainty before the election (in 2014). After the election, my govt took up the initiative to form a New India and committed to working for a new India. In last four and half years, my govt has given new hope, confidence to the people and country's prestige has been enhanced, says Kovind

From day one, the mission of my government was to improve the lives of our citizens, to eradicate their difficulties owing to poor governance, and to make sure that the benefit of public services reach the lowest strata of society