As per convention, the outgoing government only seeks parliamentary approval for limited period spending, leaving the full Budget presentation for the new regime in July.

The FM hiked standard deduction for the salaried class to Rs 50,000 from the current Rs 40,000. He also raised the exemption on tax deducted at source (TDS) on interest earned from bank and post office savings raised to Rs 40,000 form the current Rs 10,000.

Goyal announced to hike the gratuity limit from Rs 10 lakh to Rs 20 lakh and also announced a Mega Pension Yojana under which Rs 3,000 per month will given to unorganised sector employees.

Announcing major sops for farmers, Goyal said each farmer will be provided Rs 6,000 per year under the scheme called Pradhan Mantri Kisan Samman Nidhi. The farmers, holding up to 2 hectares of land, will be provided the assistance in three installments .

Goyal said it will benefit 12 crore farmers and will be implemented from this fiscal itself. He said Rs 20,000 crore have been provided for current fiscal and also announced allocation of Rs 75,000 crore for the next fiscal.

As per convention, the outgoing government only seeks parliamentary approval for limited period spending, leaving the full Budget presentation for the new regime in July.

Here are the updates on the Budget.

For farmers, there have been several schemes by different governments from time to time, but only 2-3 crore farmers were included under these schemes. But now PM Kisan Samman Nidhi scheme will benefit over 12 crore farmers 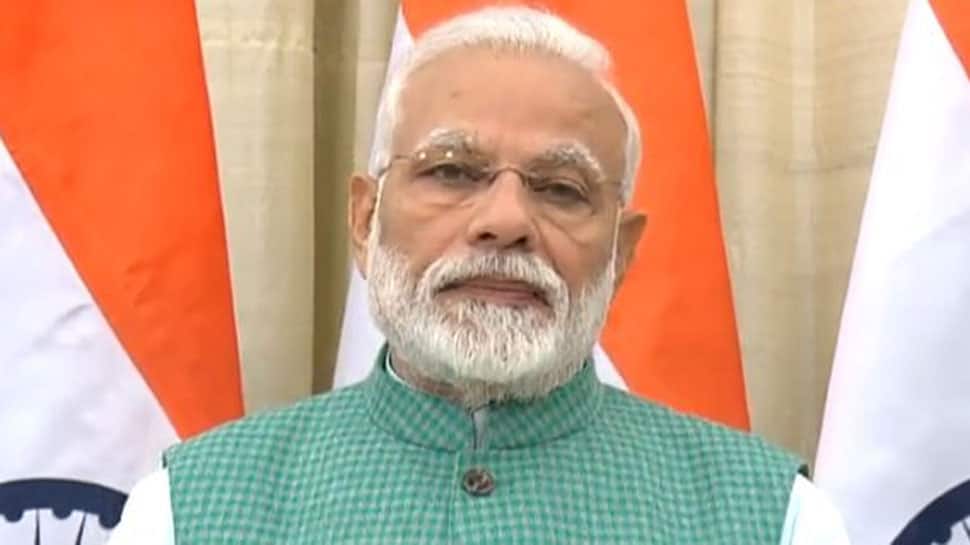 It is the generosity and honesty of middle class and upper middle class which provides tax to the nation through which schemes are formulated and there is welfare of poor. There was always the demand to exempt those, with annual income upto Rs 5 Lakh, from taxation. Our govt fulfilled this

From middle class to labourers, from farmers’ growth to the development of businessmen, from manufacturing to MSME sector, from growth of the economy to development of New India, everyone has been taken care of in this interim budget, said PM Narendra Modi

Opposition has no issues to talk about, they are scared of Modi Ji’s welfare schemes. We don’t do votebank politics, we do development politics. We are dedicated to take Indian farmers to new heights: Petroleum Minister Dharmendra Pradhan

The Interim Finance Minister tested our patience by the longest interim budget speech in the recent memory. It was not an interim budget, it was a full fledged budget accompanied by an election campaign speech, said Congress leader P Chidambaram

The Budget is unquestionably Pro-Growth, Fiscally prudent, Pro-Farmer, Pro-Poor and strengthens the purchasing power of the Indian Middle Class. The Budget expands spending while pragmatically sticking to fiscal prudence. Between 2014-19, every Budget has given significant relief to the Middle Class, says Jaitley.

Those sitting in AC rooms cannot understand the plight of the small farmers. Keeping this in mind, we have introduced Pradhan Mantri Kisan Samman Nidhi scheme. This is a historic decision.

Our government has initiated the World's largest behavioral change movement with the Swachh Bharat Mission. India has achieved 98 percent rural sanitation coverage and as many as 5.45 lakh villages have been declared ODF

The budget has met the expectations of farmers, labourers and middle class. By bearing a cost of Rs 75,000 crore,the govt will implement Pradhan Mantri Kisan Samman Nidhi scheme. This scheme will also benefit those farmers who do not take loans: BJP Chief Amit Shah

It’s a historic budget, and all the sections of the society will benefit from it, said Union Home Minister Rajnath Singh

This is not just an Interim Budget, this is a vehicle for the developmental transformation of the nation, says Goyal

Benefits under Sec 80 (I) BA being extended for one more year, for all housing projects approved till end of 2019-2020

Benefit of rollover of capital tax gains to be increased from investment in one residential house to that in two residential houses, for a taxpayer having capital gains up to Rs 2 crore. It can be exercised once in a lifetime

Individuals with gross income up to 6.5 lakh rupees will not need to pay any tax if they make investments in provident funds and prescribed equities, Goyal explains

Individual taxpayers having annual income upto Rs 5 lakhs will get full tax rebate. Individuals with gross income up to 6.5 lakh rupees will not need to pay any tax if they make investments in provident funds and prescribed equities :FM Piyush Goyal#Budget2019#BudgetForNewIndia pic.twitter.com/4LgxrCK9u3 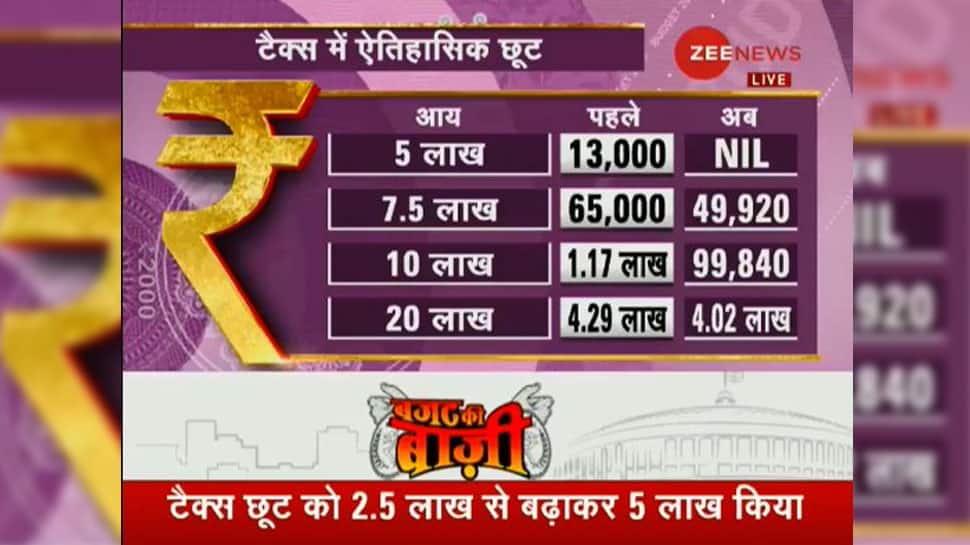 The fiscal deficit as a proportion of GDP- 3.4 percent for the coming year, as there is a need to provide for income support for farmers

Goyal on Economic growth in times ahead

The government is committed to eliminating the ills of black money; anti-blackmoney measures taken have brought undisclosed income of about Rs 1.30 lakh crore to the surface. Rs 3.38 lakh shell companies were deregistered

GST collections in January 2019 has crossed Rs 1 lakh crore. Businesses with less than Rs 5 crore annual turnover, comprising over 90 percent of GST payers, will be allowed to return quarterly returns

Single window clearance for filmmaking to be made available to Indian filmmakers, anit-camcording provision to be introduced to Cinematography Act to combat film privacy

GST has been continuously reduced, resulting in relief of Rs 80,000 crore to consumers. Most items of daily use for poor and middle class are now in the 0 percent -5 percent tax bracket

Within almost two years, almost all assessment and verification of IT returns will be done electronically by an anonymized tax system without any intervention by tax officials

Within almost two years, almost all assessment and verification of IT returns will be done electronically by an anonymized tax system without any intervention by tax officials

Cost of data and voice calls in India is now possibly the lowest in the world. Mobile and mobile part manufacturing companies have increased from 2 to 268

Today there is not a single unmanned railway crossing on the broad gauge in India. Allocation for North Eastern Region proposed to be increased to Rs 58,166 crore in this year, a 21 perent rise over previous year

Capital expenditure programme for will be at an all-time high of Rs 1.58 lakh crore in the next fiscal

Government has gone beyond incremental growth in infra, to attain transformative achievements. India is the fastest highway developer in the whole world. 27 kms of highways are being built each day. Government has completed projects that were being stuck for decades. Sagar Mala will help faster handling of import and export cars

Rs 35,000 crore already disbursed under OROP by this government. Defence budget hiked to more than Rs 3 lakh crore for the first time. If necessary additional funds will also be provided, says Goyal

To ensure cleaner fuel and health assurance, we embarked upon Pradhan Mantri Ujjwala Yojana, a programme to give 8 crore free LPG connections to rural households, 6 crore connections have been given already

Mega Pension Yojana, namely Pradhan Mantri Shram Yogi Mandhan, to provide assured monthly pension of Rs 3000 per month, with contribution of Rs 100 per month, for workers in unorganized sector after 60 years of age

Shipli Agarwal, Partner, TASS Advisors believes Increase in gratuity limit is quite encouraging and provides a relief to salaried class. It will result in tax saving up to 300,000 at the time of retirement. 3 percent tax benefit on women owmed MSMEs which indicates strong movement towards women empowerment.

PM Kisan Samman Nidhi to be rolled out from December 1,2018 (retrospective). Government will bear the burden of Rs 75,000 crore for this package

Farmers owning upto 2 hectres of land to get Rs 6,000 per year. This income support will be transferred to beneficiaries in three installments. 12 crore farmers and their families will be directly benefitted.

For doubling farmers income, government decided to increase MSP by 1.5 times the production cost for all 22 crops

India is solidly back on track and marching towards growth and prosperity. During 2014-18, 1.53 crore houses have been constructed under PM Awas Yojana. Pace of construction of rural roads has been tripled under our tenure

Efforts taken to bring full representation for economically weak backward classes, by giving them reservation in jobs and education

We are confident that given the pace of reforms in banking sector, other banks too will recover. Close to 3 lakh crore already recovered in favour of banks and creditors, big defaulters too not spared by our government

Recapitalization of banks amounting to 2.6 lakh crore has been done

Inflation is a hidden and unfair tax. From from 10.1 percent during 2009-14, we have broken the back of back-breaking inflation

Current Account Deficit will be 2.5 percent of GDP this year. We contained the fiscal deficit. Revised fiscal deficit for 2018-19 to 3.4 percent

Government has made several transformational reforms since coming to power

Indian economy has logged 8.2 percent and 7.1 percent growth rates in the first and second quarters of fiscal year 2018-19 respectively

We are the fastest growing Big economy. We have posted highest growth rate in the last five years post liberalisation

We are marching towards a New India. By 2022, when we celebrate India's 75th Independence India will be a nation where everyone has a house, electricity. India is marching towards growth and prosperity

3. Customs Law amendments for allowing the utilization of MEIS & SEIS scrips towards the payment of GST on imports and domestic procurements

4. Related party imports valuation process to be made simpler – doing away with Extra Duty Deposit

Goyal, who stepped in as interim finance minister after Arun Jaitley had to fly to New York for medical treatment, is widely expected to raise income tax exemption thresholds. 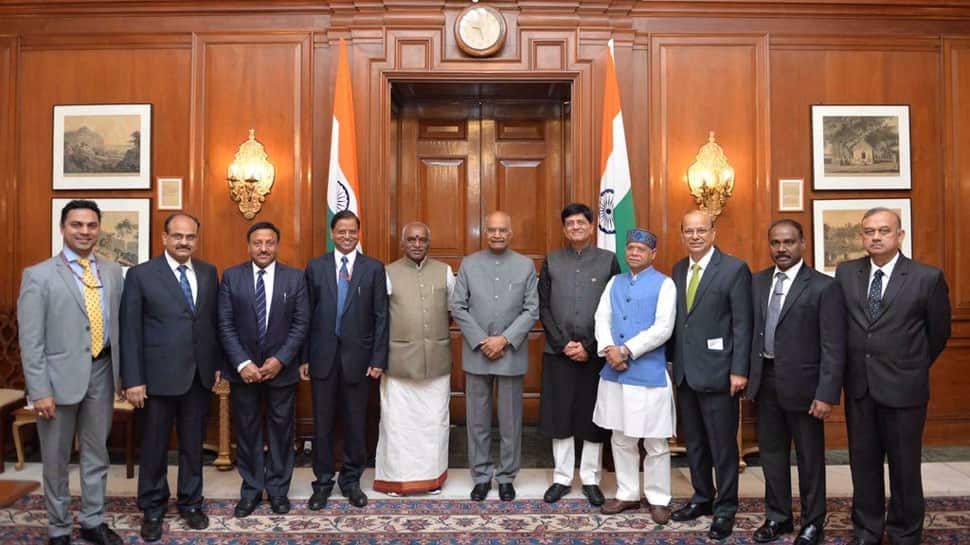 Income tax concessions for individuals, a farm relief package, support for small businesses and other spending measures may be part of the Budget that FM Piyush Goyal will present at 11 am

#WATCH Finance Minister Piyush Goyal arrives at the Parliament with the #Budget briefcase. He will present the interim #Budget 2019-20 at 11 am #Budget2019 pic.twitter.com/4sCsHZUCBI

Delhi: Finance Minister Piyush Goyal arrives at the Parliament with the #Budget briefcase. Following the Cabinet meeting, he will present the interim #Budget 2019-20 at 11 am pic.twitter.com/HvUSI61DJI

Finance Minister Piyush Goyal will rise to present the Interim Budget 2019 at 11 am. Goyal, also the Railway Minister, examined the final copy of the document on Thursday evening