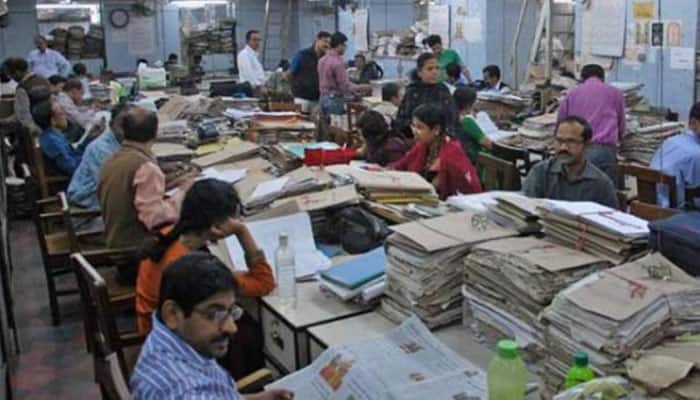 New Delhi: Bringing cheers to over 1 crore government employees and pensioners, the Union Cabinet on Wednesday approved the final report made by the secretaries panel on 7th Pay Commission recommendations.

Shortly after the meeting of the Cabinet, Finance Minister Arun Jaitley congratulated the central government officers, employees and pensioners. He tweetted:

Congratulations to central government officers, employees & pensioners on a historic rise in their salary & allowances through the 7th CPC.

Accepting hike in salaries and pensions for government employees, the Union Cabinet has cleared 23.55 percent hike in salary as recommended by the 7th Pay Commission.

The Commission had also recommended 23.55 percent overall hike in salaries, allowances and pension involving which the Cabinet has approved. The 23.55 percent increase includes hike in allowances.

As per the latest reports available in the media, the Indian Army will benefit the highest with the cabinet approving hike in its salary from Rs 21,000 to Rs 31,500.

Furthermore, the gratuity ceiling of government employees will also be doubled from Rs 10 lakh to 20 lakh.

The 7th Pay Commission report will be effective from January 1.

The decision to this effect was taken in a meeting which was chaired by Prime Minister Narendra Modi. The entry-level pay has been recommended to be raised to Rs 18,000 per month, from the current Rs 7,000, while the maximum pay, drawn by the Cabinet Secretary, has been fixed at Rs 2.5 lakh per month from the current Rs 90,000.

The government had in January set up the high-powered panel to process the recommendations of the 7th Pay Commission which will have bearing on the remuneration of nearly 50 lakh central government employees and 58 lakh pensioners.

While the Budget for 2016-17 fiscal did not provide an explicit provision for implementation of the 7th Pay Commission, the government had said the once-in-a-decade pay hike for government employees has been built in as interim allocation for different ministries. Around Rs 70,000 crore has been provisioned for it.

7th Pay Commission: Govt employees not to get arrears this financial year?