Shareholders of the Turkmenistan- Afghanistan-Pakistan-India (TAPI) Pipeline Company Limited on Saturday signed an agreement to invest USD 200 million in studies and engineering for the USD 10 billion project to transport natural gas to energy-hungry countries like India. 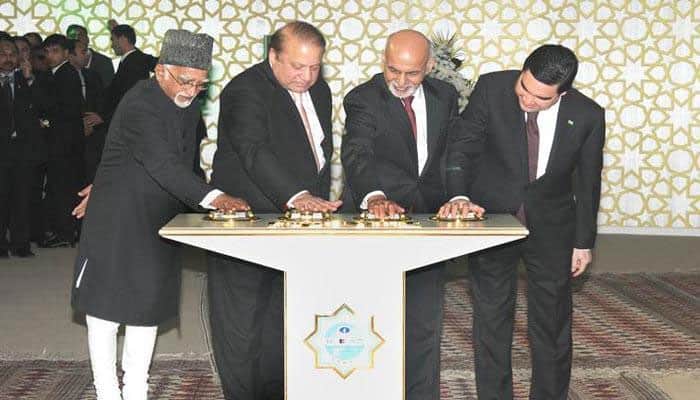 Islamabad: Shareholders of the Turkmenistan- Afghanistan-Pakistan-India (TAPI) Pipeline Company Limited on Saturday signed an agreement to invest USD 200 million in studies and engineering for the USD 10 billion project to transport natural gas to energy-hungry countries like India.

The agreement signing ceremony was witnessed by petroleum ministers and senior government officials of Turkmenistan, Afghanistan, Pakistan, India and Asian Development Bank officials in Ashgabat, capital of Turkmenistan, according to a statement by ADB.

The agreement would pave the way for delivery of long-term natural gas supplies to Pakistan by addressing its energy shortages, Radio Pakistan reported.

Speaking on the occasion, Pakistan's Minister of State for Petroleum and Natural Resources Jam Kamal Khan said TAPI will help bring 13.8 billion cubic meters of gas from Turkmenistan to Pakistan to meet the growing energy demand.

He said it will boost Pakistan's energy security, bring economic benefits to the people through job opportunities, and upgrade the associated infrastructure.

The ground breaking for the 1,814 kilometre-long TAPI pipeline, a project aimed at easing the energy deficit in South Asia, was performed in December last year in Turkmenistan.

The TAPI pipeline will have a capacity to carry 90 million standard cubic metres a day (mmscmd) gas for 30 years and is planned to become operational in 2018. India and Pakistan were originally to get 38 mmscmd each while the remaining 14 mmscmd was to be supplied to Afghanistan.

Turkmenistan, which sits on the world's fourth-largest gas reserves, started building its section of the 1,814-kilometre last December, but the three other countries have yet to begin work on their parts of the pipeline.

The pipeline will travel 773 km in Afghanistan and 827 km in Pakistan before ending at Fazilka (Punjab) in India.