India, who are now trailing by 0-1 in the series, will lock horns with Australia in the second ODI on Friday at Saurashtra Cricket Association Stadium in Gujarat. 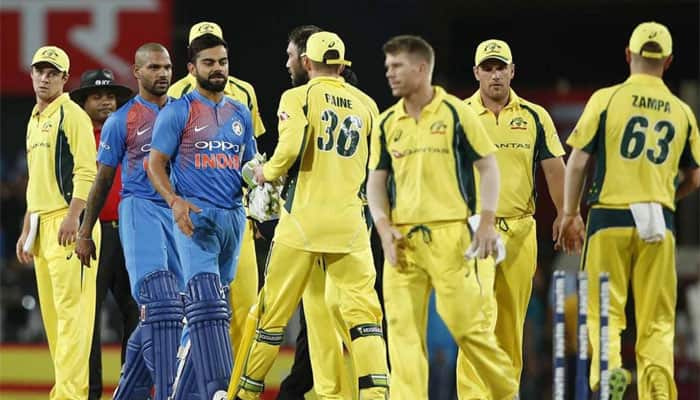 Opener David Warner and skipper Aaron Finch smashed blistering centuries to help Australia crush India by ten wickets in the opening One-Day International (ODI) of the three-match series at the Wankhede Stadium in Mumbai on Tuesday.

Chasing a target of 256 runs to win, Warner (unbeaten at 128) and Finch (unbeaten at 111) not only hammered a century each but also stitched a mammoth stand of 258 runs--the highest partnership for any wicket in ODI cricket against India--to help Australia cross the mark with 74 balls.

While Warner slammed 17 boundaries and three sixes in his 112-ball knock, Finch hit 13 boundaries besides two maximums in his knock of 114 balls.

None of the Indian bowlers managed to add a wicket into their account, with Jasprit Bumrah finishing as the most expensive bowler with 58 runs in his 7.4 overs.

India lost opener Rohit Sharma cheaply for 10 runs as early as in the fifth over. Subsequently, Shikhar Dhawan (74) and KL Rahul (47) steadied the innings for the Men in Blue by stitching a crucial 121-run partnership for the second wicket.

After Dhawan and Rahul's dismissal, India suffered a middle-overs collapse before Rishabh Pant (28) and Ravindra Jadeja (25) provided a brief rescue. However, India were eventually bundled out for 255 runs with five balls to spare.

Mitchell Starc was the pick of the bowlers for Australia with three wickets, while Pat Cummins and Kane Richardson bagged two wickets each.

Meanwhile, Adam Zampa and Ashton Agar also chipped in with a wicket each.

Warner was declared 'Man of the Match' for his terrific performance with the bat.

India, who are now trailing by 0-1 in the series, will lock horns with Australia in the second ODI on Friday at Saurashtra Cricket Association Stadium in Gujarat.