Earlier, West Indies slumped to defeats in both three-match T20I series as well as three-match ODI series against India. 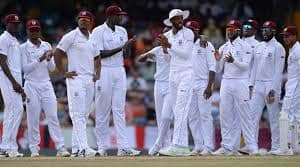 The iconic Sabina Park at Kingston in Jamaica is all set to host the second Test of the two-match series between India and West Indies from Friday. With a capacity of 20,000 spectators, the Sabina Park is one of the oldest and most historic grounds in West Indies.

After slumping to a crushing 318-run defeat against India to hand them an unassaible 1-0 lead, the Caribbean side will definitely look to stage a strong comeback and end the series against Virat Kohli's side on a high note at their home soil.

Heading into the clash, the Caribbean side holds a slight advantage in terms of their record at the venue is concerned.

A total of 51 Tests have been played at Sabina Park, with West Indies emerging victorious on 24 occassions while the hosts lost 13 of them. 14 matches at the iconic venue ended in a draw.

Before the second Test, let us take a look at West Indies' record at the Kingston venue:

# West Indies posted their lowest innings total at this venue in 2004 when they were bundled out cheaply for 47 in their first Test against England.Steve Harmison finished with the figures of seven for 12 as the visitors went on to register a crushing 10-wicket win during that match.

# The Caribbean side's highest-ever innings total at Sabina Park came during the third Test against Pakistan when they declared 790 for three in 1958. Sir Garry Sobers smashed 365-run knock while Sir Conrad Hunte struck 260 runs as West Indies registered a massive win by an innings and 74 runs.

# A huge 446-run partnership between Gary Sobers and Conrad Hunte against Pakistan in 1958 still remains the highest ever Test partnership between the two Caribbean batsmen at this iconic venue. It is also the seventh-highest stand in the history of the Test cricket.

# Harmison's brilliant figures of seven for 12 against England in 2004 is by far the best bowling figures in a Test innings by a Caribbean cricketer at Sabina Park.

# Overall, Jason Holder holds the record of best bowling figures in a match at this venue. He finished with the figures of 11 for 103 during a Test match against Bangladesh in 2018.

# Former West Indies bowler Courtney Walsh had bagged a total of 48 wickets in eleven Test matches he played at Sabina Park – which is the most by a bowler at this venue.

Earlier, West Indies slumped to defeats in both three-match T20I series as well as three-match ODI series against India.