The incident occured on the third delivery of the 41st over of South Australia's innings when Wes Agar smashed the ball to mid-on and Western Australia's Ashton looked all set to take a catch. 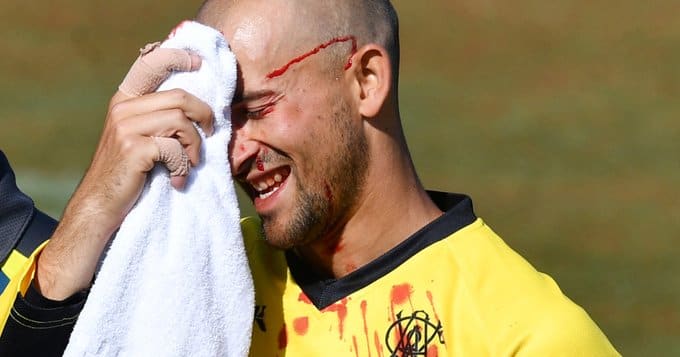 All-rounder Ashton Agar on Sunday suffered a gruesome injury to the bridge of his nose when he dropped a catch of his own younger brother Wes Agar during the Western Australia's  Marsh One-Day Cup clash against South Australia at Karen Rolton Oval.

The incident occured on the third delivery of the 41st over of South Australia's innings when Wes Agar smashed the ball to mid-on and Ashton looked all set to take a catch.

However, the 26-year-old stumbled at a vital moment and the ball struck right between his eyes, leaving Ashton blood-soaked on the ground. The blow was so hard that it knocked the hat and sunglasses of his head.

Subsequently,  Jhye Richardson called for medical assistance while Wes also ran over to check his brother. After the receiving some treatment on field, Ashton walked off the ground on the back of applause from the audiences.

Talking about the same, Wes admitted that he was pretty rattled after seeing the injury but was heartened after meeting his brother after the match.

"He slipped over and the ball hit his glasses and the glasses split him open.The doctor wanted to stitch him up, but he just got engaged so he said he'll leave it to a plastic surgeon.I was pretty rattled ... It looked really bad. I was just worrying about his health. I wasn't thinking about anything else, I just ran out of my crease to go see him. I didn't feel great, but thankfully he's okay, cricket.com.au quoted the South Australia batsman as saying.

Western Australia later went on to win that match against South Australia by six runs despite a thrilling century from Callum Ferguson.