Channel Nine TV reporter Will Crouch was shoved away and pushed into a glass door as he tried to approach Proteas captain Faf du Plessis in the airport arrival hall. 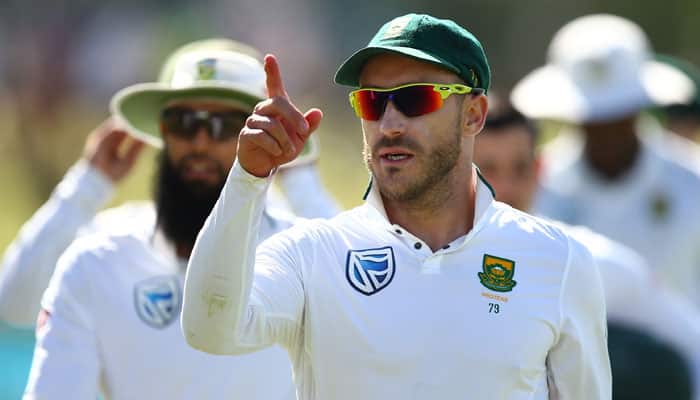 Adelaide: South Africa accused Australian media of "harassment" after a team security official scuffled with a reporter as the tourists arrived at Adelaide airport on Monday.

Channel Nine TV reporter Will Crouch was shoved away and pushed into a glass door as he tried to approach Proteas captain Faf du Plessis in the airport arrival hall.

Du Plessis is due to face an International Cricket Council disciplinary hearing on ball-tampering charges arising from the second Test, which South Africa won to seal the series.

Team manager Mohammed Moosajee said Australian media and Channel Nine, in particular, have been told several times that Cricket South Africa and du Plessis were not in a position to comment on the ball-tampering case.

"We have advised of our media protocol which has been blatantly ignored, both at the team`s hotel on Friday and Saturday and again at the airport in Adelaide today," Moosajee said in a statement.

"The `reporter` at the airport disrespected us and continued to harass Faf for comment. He was advised to move three times, and did not adhere to this request," he said.

"The `reporter`, who also had no official accreditation, then proceeded to lunge towards Faf with an unknown object causing a direct breach of security protocol. The reporter also shoved the team manager in the back.

"Throughout the (Australia) tour we have respected all our media obligations and treated media with utmost respect. At the same time, we would like to see this respect reciprocated and will not accept such behaviour as displayed by the Channel 9 News reporter."

Du Plessis was wearing headphones at the time of the altercation and reporters said he gave a thumbs-up to cameras moments before the security official clashed with Crouch, who was unharmed.

Channel Nine said the same security official had a run-in with another of its reporters in Melbourne over the weekend as he tried to approach du Plessis.

At this week`s day-night third Test in Adelaide, South Africa will attempt to become the first away team to whitewash Australia, who have been plunged into crisis by their slump in form.

Veteran batsman Hashim Amla lashed out at the "provocative behaviour" of the reporter in Adelaide.

"Disappointed.. such provocative behaviour from reporters. Let a man walk in peace. Ask with manners n courtesy and u prob will get a response," he tweeted.

Du Plessis is facing a possible one-match ban after he allegedly used a sweet in his mouth to give the ball extra swing.

A hearing will be held by Andy Pycroft of the ICC match referees panel and the results will be announced in due course, the ICC said on Friday.