The 28-year-old said that he no longer considers Australian cricketers his friends after being targetted both on and off the field by them in a fiercely-fought Test series that his team won. 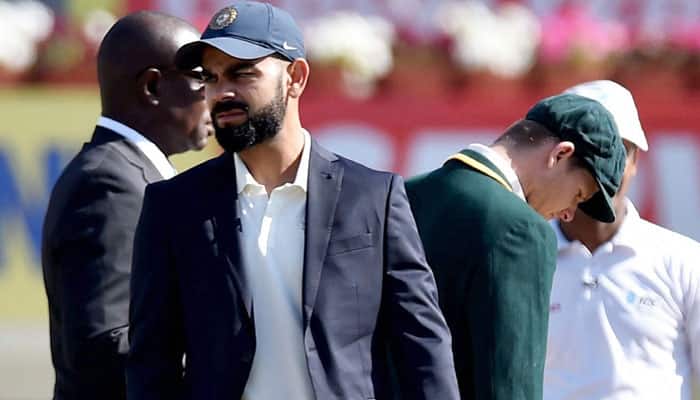 New Delhi: Indian captain Virat Kohli, who was always full of praise for Aussie cricketers – especially Steve Smith and David Warner, altered his perception for the players from Down Under after conclusion of the series in Dharamsala.

The 28-year-old said that he no longer considers Australian cricketers his friends after being targeted both on and off the field by them in a fiercely-fought Test series that his team won.

Kohli had stopped short of calling Steve Smith a cheat for his 'DRS Brain Fade' moment after which a section of Australian cricketers (current and former) along with their media targetted the Indian captain, going as far as to compare him with controversial US president Donald Trump.

It seems Virat Kohli and the Aussies are no longer mates: https://t.co/BuY7TAy2X6 #INDvAUS pic.twitter.com/51cc7C1BKC

Worst, the Cricket Australia CEO James Sutherland, in a sarcastic remark to a radio station, said Kohli perhaps does not know the spelling of sorry.

At the end of the rubber, which India won 2-1, an Australian scribe asked if Kohli still considered Smith's men his friends off the field as he had said at the start of the series, the skipper gave a no holds barred answer.

"The thing I said before the first Test, I have certainly been proven wrong and you won't hear me say that ever again," Kohli said.

During the series, the Australian cricketers were seen making fun of Kohli's shoulder injury while Smith had called Murali Vijay a "f****** cheat" for claiming a catch yesterday.

Worse, Matthew Wade and Ravindra Jadeja had a near bust up after a lengthy altercation.

Kohli also called the series win as the best he has been a part of.

Virat: I think this is our best series win so far #INDvAUS

Unbelievable. This is our best series win so far. I thought England was intense, but the way Australia gave us a fight it was amazing on their part. But our guys kept bouncing back. Shows the character and maturity," Kohli said after the match.

"Ajinkya led the team really well. The changes we made in our fitness regime have paid off. Guys have been able to sustain the performance throughout the season. In the past we have had sessions where we have given away the game easily. Not this season. Been a team season."

"Not one or two individuals who have stood out. Unbelievable, the kind of fitness and desire the fast bowlers have shown, it has been game-changing," Kohli added.

We give it back even better when someone pokes us: Virat Kohli on banters with Australia