Aussie batsman Chris Lynn on Friday hit a monstrous six, which may believed will one of the biggest, if not the biggest. 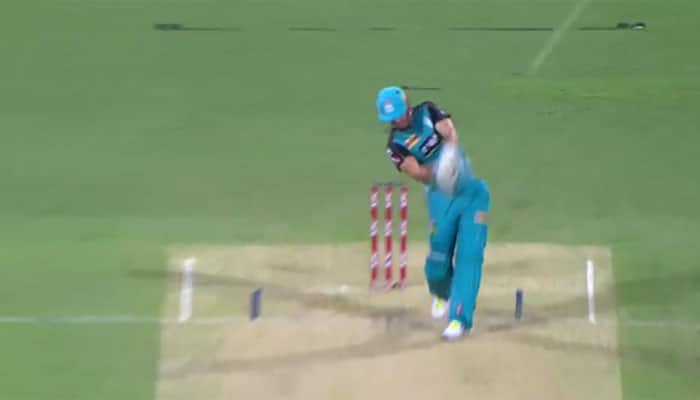 New Delhi: Aussie batsman Chris Lynn on Friday hit a monstrous six, which may believed will one of the biggest, if not the biggest.

It happened during a Big Bash League match between Hobart Hurricanes and Brisbane Heat at Woolloongabba ground.

That 121m six came off the first ball of the seventh over, bowled by Shaun Tait. It landed on the roof of the stadium

Half man, half amazing #BBL06 pic.twitter.com/KjkbubQRZ6

Pretty sure Lynn and Baz are having their own hitting comp and there just happens to be a BBL game involved as well! #BBL06 pic.twitter.com/ODIui5etcp

Stop it, Baz! Putting on a show for fans at the Gabba! #BBL06 pic.twitter.com/YhTj8NNcpR

A full house, and some lusty hittings. But the showstopper was the 26-year-old from Brisbane. The local lad scored an unbeaten 84 off mere 50 balls, which included seven sixes and four fours, in Heat's successful chase of 173-run target.

He stitched a 109-run second-wicket stand with former Kiwi skipper and one of the greatest stroke makers of all time, Brendon McCullum (72 off 35).