South Africa will kickstart their campaign at the 2019 ICC World Cup against hosts England on May 30. 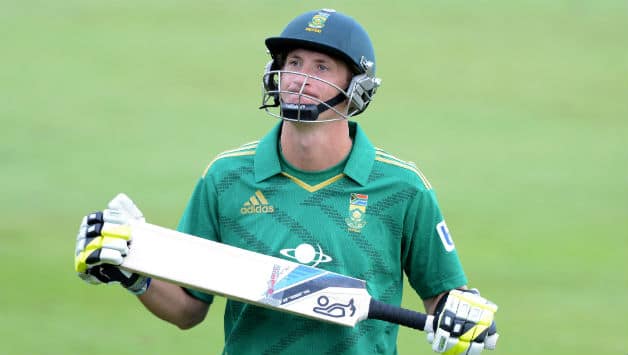 South African all-rounder Chris Morris has been called up in the 15-member South African squad as a replacement for injured fast bowler Anrich Nortje for the upcoming International Cricket Council (ICC) World Cup, which is slated to take place in England and Wales from May 30 to July 14.

Reflecting on Nortje's injury, team manager Dr Mohammed Moosajee said that the 25-year-old sustained a fracture on his right thumb while practicing in the nets and now he needs at least six to eight weeks of time to recover fully from the injury.

"Anrich sustained a fracture to his right thumb during a net session in Port Elizabeth on Monday. He immediately consulted a hand surgeon and underwent surgery to stabilise the joint and will unfortunately be side-lined for up to eight weeks. This makes him unavailable for the upcoming ICC Men’s Cricket World Cup," the ICC official website quoted Moosajee as saying.

Nortje was picked up in South Africa's World Cup squad after bagging eight wickets from four matches he played since making his debut in March this year against Sri Lanka.

In Nortje's absence, Morris has been named in the national squad for the mega event.

Insisting that Morris was their next best option with the ball after Nortje, Cricket South Africa (CSA) National Selection Panel convener, Linda Zondi said that the all-rounder has the required pace and death-bowling skills which will help the side in the United Kingdom.

"Chris has always been in our plans and is our next best option with the ball.He has the pace and death-bowling skills which will be vital in the UK, and also gives us that depth as a deadly finisher with the bat. We have had concerns around his injuries and workload capabilities but this is an opportunity for him to make a mark on the biggest stage," Zondi said.

Zondi, meanwhile, wished a speedy recovery for Nortje while expressing his confidence that the pacer would rebound strongly to fulfill his potential.

"It is unfortunate what has happened to Anrich, he is a talented player with exciting potential. We wish him well on his road to recovery and have no doubt that he will bounce back to fulfil his potential," he concluded.

Morris, who played his last ODI for South Africa in February 2018, is currently playing for Delhi in the 2019 Indian Premier League and has bagged 13 wickets for them this season.

On a related note, South Africa will kickstart their campaign at the 2019 ICC World Cup against hosts England on May 30.