The duo has been roped in as covers after pacers Stuart Broad and Jofra Archer and left-arm spinner Jack Leach were reported to have been struggling with illness. 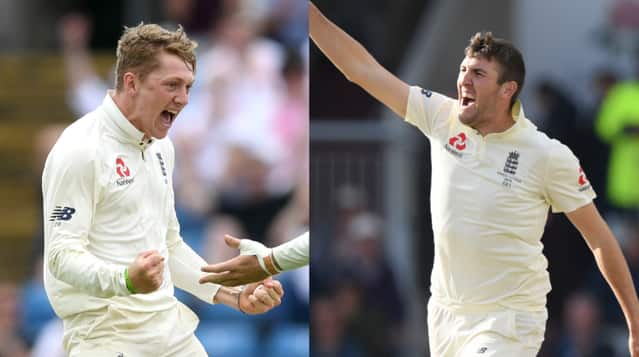 Pacer Craig Overton and off-spinner Dominic Bess have been called up in the England squad for the upcoming four-match Test series against South Africa, beginning on Boxing Day (December 26) at SuperSport Park in Centurion.

The duo has been roped in as covers after pacers Stuart Broad and Jofra Archer and left-arm spinner Jack Leach were reported to have been struggling with illness. Overton and Bess are most likely to reach Johannesburg on Saturday.

"Dominic Bess and Craig Overton have been called up to the England men's Test squad as cover ahead of the first Test starting on Boxing Day against South Africa at SuperSport Park, Centurion due to illness in the camp," the England and Wales Cricket Board (ECB) said in an official statement.

"Bess and Overton are due to arrive at the team's base in Johannesburg on Saturday morning," the country's cricket board added.

Overton, who played his last Test for England against Australia earlier this year, has appeared in a total of four matches for the side in the longest format of the game and amassed 403 runs in it.

Bess, on the other hand, has featured in just two Tests for England, notching up 121 runs.

Meanwhile, the ECB also confirmed that the tour match against South Africa A has been downgraded to a three-day friendly match in the wake of widespread illness in the England camp.

"Due to widespread illness in the England camp, it has been agreed that the match against South Africa A starting at Willowmoore Park today has been downgraded to a three-day friendly tour match with only 11 players batting or fielding at any point in time. The playing conditions remain as previously agreed," the ECB said.