Cricket a special part of my life but not the priority: Virat Kohli

Kohli will now lead India in the five-match ODI series against New Zealand from January 23 at McLean Park. 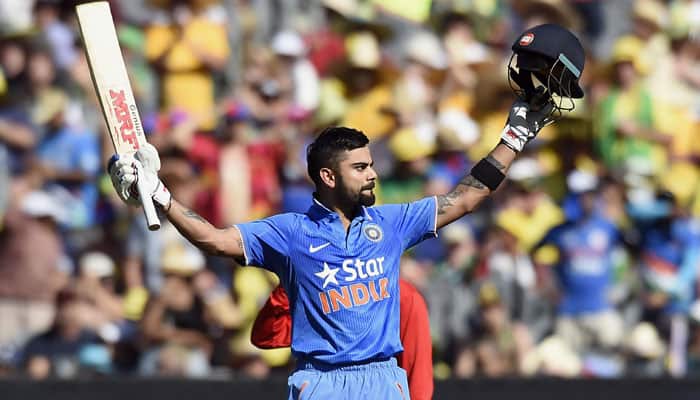 Indian skipper Virat Kohli has established himself as one of the world's greatest batsmen in the modern-day cricket. Known for his committment and hardwork on the field, Kohli has been breaking records constantly and it seems that there is no turning back for the 30-year-old.

Having enjoyed a record-breaking 2018 year, Kohli continued his good form in this year as well as he not only achieved several individual records but also guided India to historic twin victories in Australia.

Kohli, the world's no.1 Test and ODI batsman, guided India through a historic tour of Australia, during which the side clinched the Test and ODI series by 2-1 and settled with a 1-1 draw in the T20I series.

However, the swashbuckling batsman stated on his official app that though cricket is an important part of his life, his family still remains his biggest priority.

"Eight years down the line the priority would be my family, priority would be myself, Anushka and our family only by then. So that would be the priority for us. And cricket would obviously a part of my life always but I feel that family should be a priority at all times because nothing is bigger than life. Cricket is a part of life and nothing should be bigger than life. I know people will take things a bit too seriously that if you don’t say cricket is your life then you are not committed enough, I don’t believe in all that. If I am committed to talking right now about something, I am committed to this,” Kohli said.

He further went on to say,"But the larger picture always has to be life because whatever happens you come back home and whatever may happen in your life, you always come back home. So I think, the priority will be family, should be family and cricket will always be a very special part of my life but it is not the most important thing in life, it is the way I see it. But I think eight years down the line I will be totally focused towards my family."

During India's tour to Australia, Kohli added many records to his tally.

By smashing his 39th One-Day International century during India's six-wicket win over Australia in the second match  at the Adelaide Oval, Kohli became the second cricketer with most hundreds overseas. With 22 tons to his name now, the Indian skipper surpassed Sanath Jayasuriya and Kumar Sangakkara who both have 21 centuries in their tally.

En route to his blistering knock, he also became the 11th highest run-scorer in the history of ODI cricket.With a total of 10,385 ODI runs in his tally, Kohli has went past Sri Lanka's Tilakratne Dilashan (10,290 runs).

He has now brought up a total of 64 international hundreds to become the third batsman with most international centuries, overtaking former Sri Lankan cricketer Kumar Sangakkara (63).

Earlier, he had also broken former captain Rahul Dravid's historic record of accumulating the most Test runs scored by an Indian in a calendar year overseas.Kohli achieved a run tally of 1,138 runs, surpassing Dravid who has scored 1,137 runs in Tests away from home.

He will now look to add more feathers on his cap when he will lead India in the five-match ODI series against New Zealand from January 23 at McLean Park.