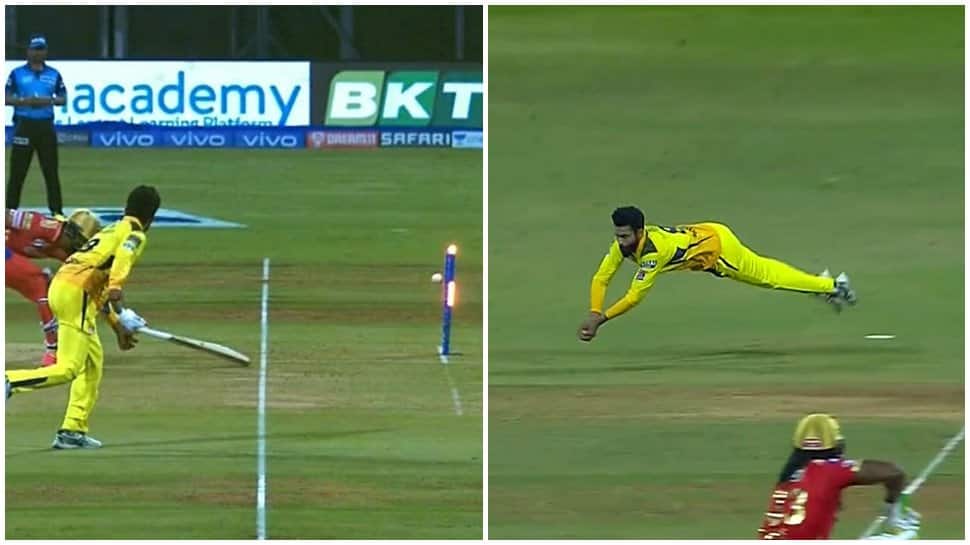 While CSK pacer Deepak Chahar was on top with the ball, his teammate Ravindra Jadeja went on to produce some stellar fielding efforts, which saw Punjab lose their two premier batsmen KL Rahul and Chris Gayle cheaply.

It all started in the fifth delivery of the opening over, when a slight hesitation between Gayle and Rahul led to Jadeja making use of the extra second and executing a brilliant run-out to send the Punjab skipper back in the dugout for 5 off 7 balls.

You don't run a risky single to Sir Jadeja, You just don't. pic.twitter.com/dI8XZ80ync

After the brilliant run-out effort, Jadeja went on to produce another brilliant fielding display, and this time Gayle ended up being on the receiving end. In the third delivery of the fifth over, Jadeja dived forward to pluck a sharp low catch, which brought and end to Gayle's stay in the middle. The Windies cricketer was dismissed on 10 from the same number of balls.

Sir Jadeja has mastered the art of fielding. His squad can always rely on him for catching a ball. He has also shown off his fielding skills in the field too. Undoubtedly, he is one of the finest fielder

First with run out, second with this catch! Wonder. pic.twitter.com/mRpL3OhJFI

Rahul had scored 91 from 50 balls, while Gayle had 40 off 28 deliveries in Punjab's previous contest against Rajasthan Royals, which the former won by four runs.

In response, Chennai got off to a slow start and lost opener Ruturaj Gaikwad inside the powerplay overs. However, a solid 66-run stand between Faf du Plessis and Moeen Ali for the second wicket helped CSK make the chase look like a cakewalk.

Ali was dismissed by Murugan Ashwin on 46 from 31 balls, following which, CSK also lost Suresh Raina and Ambati Rayudu soon.

However, Du Plessis remained firm at one end and finished the contest unbeaten on 36 from 33 balls and helped his side complete the 107-run chase in 15.4 overs.

CSK will next lock horns with Rajasthan Royals on Monday.