India A vs New Zealand A

Don't reverse sweep into your face: Jimmy Neesham's advice after hurting his chin

New Zealand A, who have now leveled the three-match series against India A 1-1, will now lock horns in the third unofficial ODI at the same venue on January 26. 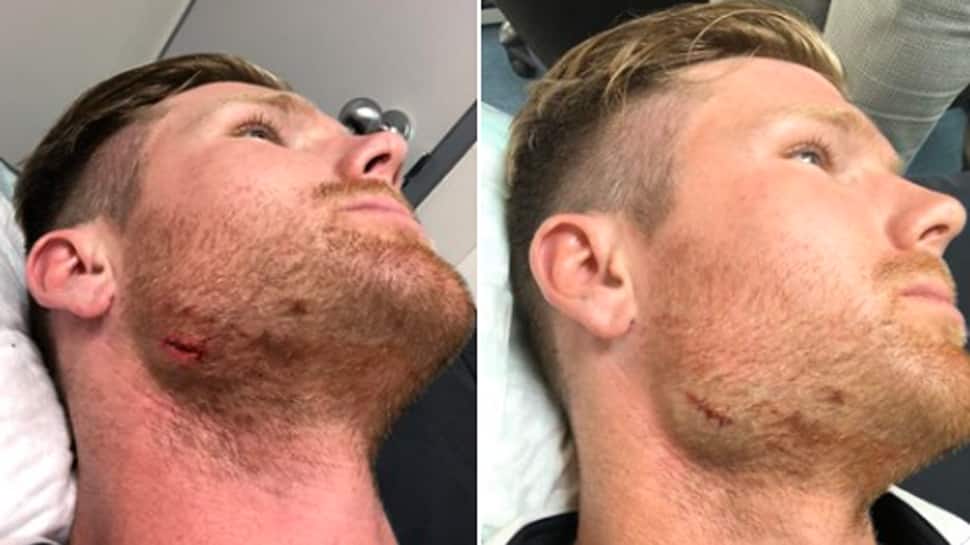 All-rounder Jimmy Neesham has issued a reverse sweep advice to everyone after injuring his chin during New Zealand A's second unofficial One-Day International (ODI) clash against India A at Hagley Oval in Christchurch on Friday.

The 29-year-old received a huge blow on his helmet which left a big cut on his chin while attempting to play a reverse sweep off a Krunal Pandya delivery after New Zealand A were asked to bat first.

Taking to his official Twitter handle, Neesham shared a picture of himself with a big cut on the right side of his chin and a photo after attending a physio.

"Got fixed up good today! Lesson: don't reverse sweep up into your own face," he wrote along with a picture and lesson for everyone.

Got fixed up good today! Lesson: don’t reverse sweep up into your own face  pic.twitter.com/0zTVFw8NLD

After receiving the blow, Neesham walked off the field for medical assessment before returning to the game when George Worker got dismissed after playing a blistering knock of 135 off just 144 balls.

Neesham remained unbeaten on 33 off 31 deliveries as New Zealand A posted a score of  295 for seven in their stipulated 50 overs. For India A, Ishan Porel picked up three wickets, while Mohammad Siraj finished with two wickets. Axar Patel and Krunal Pandya chipped in with a wicket each.

In reply, Kyle Jamieson, James Neesham and Jacob Duffy bagged two wickets each while Ollie Newton and Rachin Ravindra chipped in with a wicket each to help New Zealand A restrict India A to a score of 266.

Krunal Pandya was the highest scorer for the visitors with 51 runs, while Ishan Kishan and Vijay Shankar also contributed with 44 and 41 runs, respectively.

New Zealand A, who have now leveled the three-match series against India A 1-1, will now lock horns in the third unofficial ODI at the same venue on January 26.