I backed myself to hit a six after not taking that single: Dinesh Karthik

Over the last couple of years, Karthik has emerged as one of the most effective finishers for India in the shorter formats. 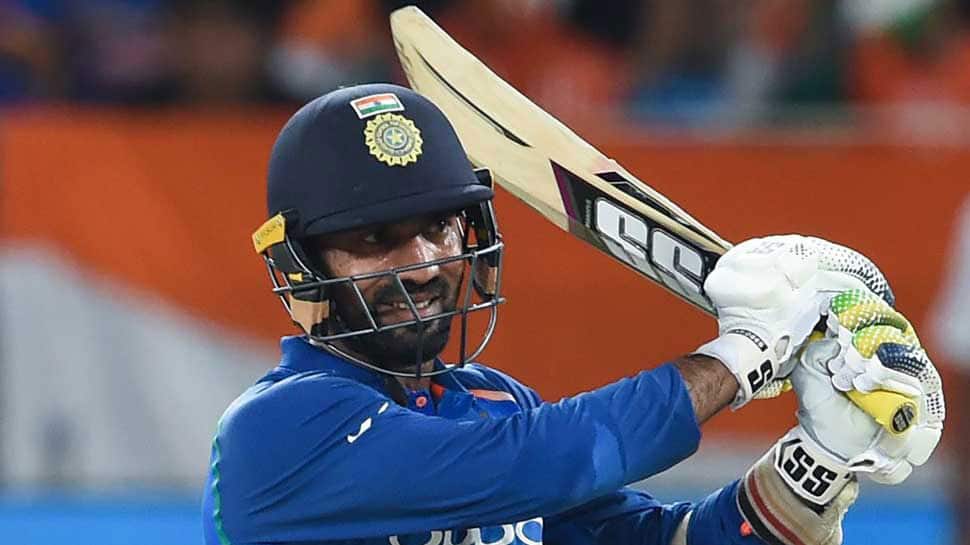 "I genuinely believed that I could hit a six," Indian wicketkeeper-batsman Dinesh Karthik said as he reflected on refusing a single to non-striker Krunal Pandya in the series-deciding third T20 International against New Zealand.

On Sunday night at Hamilton, things did not go as per plan in the final over, in which India needed 16 runs, and the 33-year-old has no qualms in accepting that. Karthik refused a single to the big-hitting Krunal off the third ball of the over leading to some debate on whether he took the right decision.

"I think Krunal and I batted really well from that situation (145/6). We were able to bring the match down to a place where the bowlers were under pressure. We backed ourselves to do the job. And at that stage (after refusing the single), I genuinely believed that I could hit a six," Karthik told PTI.

Over the last couple of years, Karthik has emerged as one of the most effective finishers for India in the shorter formats.

He faltered at Hamilton but it was only him and Krunal who took the game to the final over after India were 145 for six in the 16th over, needing another 68 off 28 balls.

"As a middle-order batsman, a lot of times you have to trust your ability to play those big shots under pressure. It is also important to trust your partner at that time. It did not come off on that occasion but those things happen in the game of cricket."

Both Krunal and Karthik shared an unbeaten 63-run stand off 28 balls but it was not enough to save the series. India lost the game by four runs and series 1-2.

"Some days you are able to hit a boundary, some days the bowler does a good job. And there, you have to give credit to Tim Southee for the way he executed those yorkers under pressure. One mistake there and I am sure we would have take him down," said Karthik.

Asked if the team management had a word with him on not taking that single, Karthik said: "They were all aware of the situation and knew we both did the best we could. On that day, we were not good enough. But the support staff, as it has been around for a long time, understood it (our game plan).

"As I said, you keep practising those situations and because the belief I had in overcoming those situations in practice, I trusted myself do the job in the middle. I was not able to deliver that day. That is what sport is. The more you back yourself, the more consistent you become in finishing the game."

Having made his international debut almost 15 years ago, Karthik has managed to play only 26 Tests, 91 ODIs and 30 T20s.

But over the last 24 months, his stop-start career seems to have found second wind and he has featured in as many as 20 ODIs and 21 T20Is besides making a Test comeback after more than eight years.

Karthik, who has credited Mumbai stalwart Abhishek Nayar for his recent success, can't recollect days when he has batted better.

"If you go by the results, definitely yes (his best run in international cricket). There is some continuity and that feels good. The team has also done well so it has been a great couple of years to be a part of."

Despite consistent performances, Karthik will have to be on top of his game in the upcoming T20 and ODI series against Australia, India's last before the World Cup in May-July. And he is ready to prove himself again.

"As an international cricketer, you have to keep reinventing the wheel, being consistent is part of it. There will be questions asked and you have to keep answering them (with your performances).

"If you read into those things too much (of proving yourself repeatedly), it only pulls you down. It is important that whatever opportunities you get, you do the best you can."

Karthik said his long career, albeit an inconsistent one, has helped him immensely in his development as a finisher. He has reached a stage where batting under pressure has become second nature to him.

"Abhishek and I have been practising those situations for long now. Preparing on different wickets, different days, it helps.

"As a player, you want to revel in those situations. That is when you raise the bar for yourself and for your team as well."

Has team management told him that number six is the spot for him in the batting order?

"Not really. They are also very flexible in in their approach. I don't think they have fixed me at number five or six.

"They just believe that whatever opportunity they will give me at any position, they know that I will do the best that I can. They know that I am able to finish games, irrespective of the batting position," added Karthik.