I have been sledged by Sachin Tendulkar, says Australian legend Glenn McGrath

The speedster further credited Steve Waugh of devising a new term for sledging. “He called it gamesmanship.” 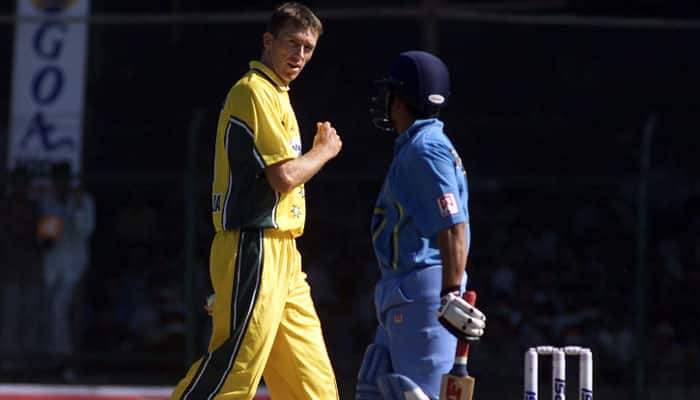 New Delhi: Australian cricket team has always made headlines for their on-pitch behaviour, especially during the late 1990s and early 2000s. The concept of sledging was virtually made popular by the Aussies of that era.

Australian pace legend, Glenn McGrath, who himself has been at the center of many such incidents, made shocking revelations alleging India's cricketing icon Sachin Tendulkar of sledging him.

In an interview with The Hindu, McGrath said, “I have been sledged by Sachin Tendulkar.”

“Every team in the world sledges. But when the Aussies do it, it makes news. When the other teams sledge against us, we keep quiet. The moment the Australians are at it, the others are quick to complain,” he added.

“The Australian way is very upfront. We play our cricket with a lot of passion. We say a few things on the field but all is forgotten as we walk off it. It’s a part of Australian culture.”

The speedster further credited Steve Waugh of devising a new term for sledging. “He called it gamesmanship.”

When asked about the biggest sledger in the Australian team, McGrath answered, “Matthew Hayden was probably the worst. But he was nicely hidden fielding at gully.”

Talking about the most intelligent cricketer he had ever come across, McGrath heaped praise on fellow Austrlian Shane Warne. “It would be Shane Warne, the best Test captain Australia never had. Warnie read the game very well, was a showman and loved the big moments," he was quoted saying.

McGrath also had comments to make on the status of present day cricketing pitches. He said, “In my days, the tracks in Melbourne, Sydney, Perth, Brisbane and Adelaide — they were all different. There was pace and bounce at Perth and Brisbane, while the spinners would come into play more at Melbourne and Sydney. Now, all that has changed. All the surfaces favour the batsmen, are similar in nature.”