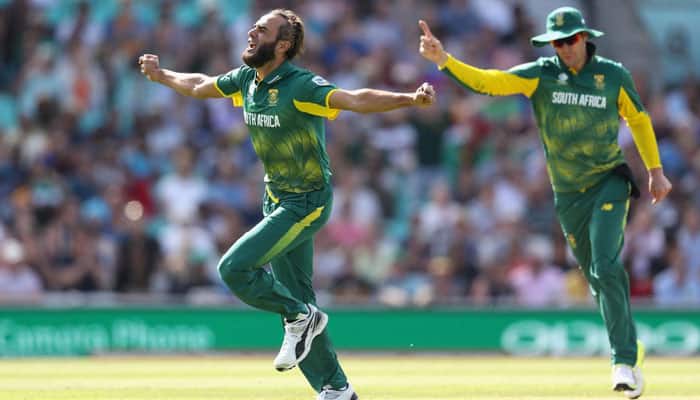 Amla scored a measured 103 off 115 deliveries and shared a 145-run stand with Faf du Plessis (75) for the second wicket as South Africa recovered from a very slow start to score 299/6 in 50 overs in their Group B opener.

In reply, Sri Lanka were bowled out for 203 in 41.3 overs with only Captain Upul Tharanga (57), Niroshan Dickwella (41) and Kusal Perera (44 not out) providing some resistance against the South African bowlers. Tahir and paceman Chris Morris (2/32) were the best performers.

The foundation of the win was laid by Amla after Sri Lanka won the toss and asked South Africa to bat at Kennington Oval. Amla and fellow opening partner Quinton de Kock (23) struggled for runs initially, with Sri Lankan pacers Lasith Malinga and Suranga Lakmal keeping it tight from both ends. Assisted by the wind and a tinge of grass on the pitch, the Sri Lankans leaked only 32 runs in the first 10 overs.

The opening partnership lasted for 44 runs in 12.1 overs before left-hander de Kock edged a delivery from medium pacer Nuwan Pradeep to wicket-keeper Dickwella.

Pradeep could have sent back du Plessis in the 17th over had Malinga not dropped a catch at fine leg after he pulled a short delivery.

It allowed Amla and du Plessis to build a partnership and they paced the innings well mixing ones and twos with occasional boundaries.

While Amla completed his fifty in 56 deliveries, du Plessis reached the half-century in 52 balls.

Pradeep broke the stand as du Plessis pulled into the hands of a jumping Dinesh Chandimal at short mid-wicket in the fourth ball of the 34th over, with South Africa at 189/2.

In the next over, Prasanna snared AB de Villiers (4) when the latter miscued one for an easy catch to Chamara Kapugedera at mid-off.

Amla, joined in the middle by David Miller (18) as the pair faced the task of restructuring the innings, completed his century in 106 deliveries with a single towards square leg off Lakmal in the third ball of the 42nd over.

The following delivery saw Miller edge one to Prasanna at third man. Amla fell soon, trying to run a second following a throw at the bowler`s end from Kusal Mendis at mid-wicket in the next over. Amla`s knock featured five fours and two sixes.

During the chase, Dickwella and Tharanga gave Sri Lanka a flying start, putting up 69 runs for the opening wicket in 8.2 overs. But after Dickwella was dismissed, giving a catch to Wayne Parnell at third man off paceman Mornie Morkel, Tharanga ran out of support.

Jeevan Mendis (11) and Chandimal (12) couldn`t contribute -- the former being dismissed by a splendind one-handed catch by a leaping de Villiers at short midwicket off Morris and the latter being run out, leaving Sri Lanka at 116/3 in 17.2 overs. The same over saw leg-spinner Tahir removing Chamara Kapugedera (0) with a lbw decision.

Tahir then claimed Tharanga and Asela Gunaratne (4) to put his side in command. When Morris trapped Prasanna (13) in front of the wickets, Sri Lanka were seven down for 191 in 37.2 overs. Eventually they were bowled out for 203.