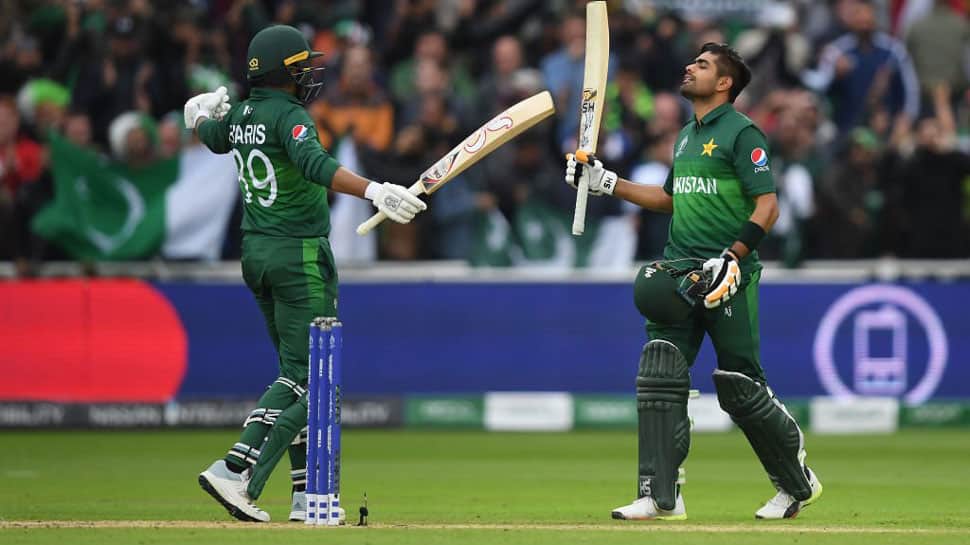 Babar Azam produced a sublime unbeaten century under pressure as Pakistan continued its revival in the World Cup by halting New Zealand's unbeaten run with a six-wicket victory, on Wednesday.

They raised a 126-run stand for the fourth wicket after Mohammed Hafeez's dismissal off a part-time spinner, yet again, raised eyebrows and Mitchell Santner looked almost unplayable.

The situation demanded restraint and Hafeez was set but he threw away his wicket while trying to attack Kane Williamson.

This was after Fakhar Zaman (9) was done in by Trent Boult and Imam ul Haq (19) became a victim of Lockie Ferguson.

Taking the attack by the scruff of its neck, Azam shifted the gears after completing his half-century and hit some glorious shots off Williamson and Boult to keep the required run-rate under check.

The 24-year-old completed his century, 10th in ODIs, with a single of Lockie Ferguson off. His knock, coming off 127 balls, was embellished with 11 shots to the fence.

Sohail provided superb support from the other end before running himself out. Only two runs were required at that time. Williamson tried all the tricks in his bag but Pakistan overhauled the target with five balls to spare.

With this win, Pakistan have now moved up to number six in the table with seven points from as many games. They now need to win their last two games against Afghanistan (June 29) and Bangladesh (July 5) to hope for semifinal qualification.

The win-lose sequence in first seven matches for Pakistan is exactly the same what they had in their victorious campaign in the 1992 World Cup.

New Zealand, who lost their first game of the tournament, stayed on number two with 11 points, behind Australia (12).

Earlier, Pakistan pacer Shaheen Afridi rattled the top and middle order in a fiery spell but James Neesham (97 not out) and Colin de Grandhomme (64) helped New Zealand post 237 for six.

Reduced to 83 for five after electing to bat, New Zealand looked up to Williamson for yet another rescue act but it was Neesham and de Grandhomme, who revived the Kiwi innings with their 132-run partnership.

De Grandhomme's run out ended the fighting stand but Neesham stayed till the end and finished the innings in style by hitting a six off Wahab Riaz. He missed out on getting his maiden ODI century but his crucial knock, which came off 112 balls with five fours and three sixes, helped New Zealand stay in the game.

Pakistan were off to a cracking start as Mohammed Amir (1/63) struck with his first delivery. Martin Guptill (5) played that ball on to his stumps.

Left-arm Afridi then swung into action, ripping apart the middle order. He began by dismissing Colin Munro (12), who was caught by Haris Sohail in slips and then returned to send back dangerous Ross Taylor (3).

Pakistan skipper Sarfaraz Ahmed, who was called a pig by a fan, took a one-handed blinder, diving full-stretched on his right to hold an edge from Taylor.

The combo of Sarafaraz and Afiridi was at it again and this time Tom Latham (1) was consumed.

Williamson (41) and Neesham added 37 runs for the fifth wicket before leg-spinner Shadab Khan (1/43) beat the Kiwi skipper and his edge was smartly taken by Sarfaraz.

Nothing seemed to work for Pakistan after that with Neesham and de Grandhomme building the innings bit by bit.

They worked the ball around, stayed patient until it was time to accelerate.