The pattern which began way back in Brisbane in 1992, continued at Manchester in 2019 with a ruthless India crushing Pakistan by 89 runs (DLS method) to maintain their spotless World Cup record. 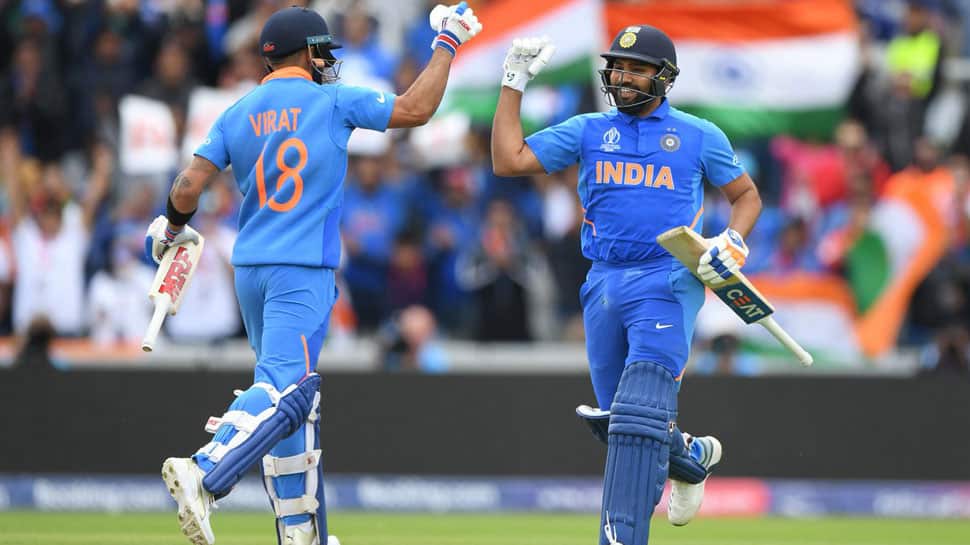 MANCHESTER: If there is one puzzle Pakistan cannot crack, it’s how to beat India in a World Cup. Year after year, edition after edition, they enter the tournament believing they can do it, but fail to channel that belief on the ground.

The pattern which began way back in Brisbane in 1992, continued at Manchester in 2019 with a ruthless India crushing Pakistan by 89 runs (DLS method) to maintain their spotless World Cup record.

Rohit Sharma led a relentless Indian attack on Pakistan with a 24th ODI century, once again underlying his worth at the top of the order. Rohit’s knock, Virat Kohli‘s astute half-century and KL Rahul's determined 57, laid the foundation for India’s 336 for 5 – their highest total against Pakistan across seven World Cup matches.

Chasing a steep target, Pakistan simply never looked to be in it. Fakhar Zaman and Babar Azam led Pakistan’s fight with a 104-run stand despite playing slow. But once it was broken, Pakistan imploded.

From 117 for 1, Pakistan slumped to 129 for 5 and never recovered. At 166 for 6 in 35 overs, rain intervened for the third time, and with another hour lost, the revised equation for Pakistan was to score 302 runs from 40 overs, meaning they needed to knock off a mind-boggling 136 runs from five overs.

Through Vijay Shankar and Hardik Pandya's medium-pace and Kuldeep Yadav's wrist spin, India kept Pakistan to 212/6. The win now puts Pakistan on the brink of elimination. Another loss and they’d be back on a flight back home.

Meanwhile, India’s record now stretches to 7-0. Believe it or not, streaks are a thing.

But perhaps none comes close to what India have achieved, purely in terms of the emotions attached. Surely, the barren run will end and someday, Pakistan will beat India at the biggest cricket tournament. Sunday, June 16, 2019, however, isn’t that day.

It could have changed had Pakistan set a few things right. The first bad move was to opt to bowl, even if the conditions remained overcast. Lack of movement allowed India to express themselves early, and Rohit once again laid the marker and proved why he is the best opener going around in world cricket.

India got off to a breezy start with Rohit leading the way with his quickest ODI half-century. With Rahul, Rohit put on 136, the highest opening stand for India against Pakistan in the World Cup. After an inside edge went past Rohit’s stumps for a boundary, the opener caressed Hasan Ali down the ground, cut him brutally towards backward point and thumped him over cow corner.

Rahul was equally impressive. He pulled Mohammad Amir for his first boundary after playing out a maiden to him in the first over. A paddle sweep and a backfoot cut off Shadab Khan and Imad Wasim followed. The two 38-year-olds, Shoaib Malik and Mohammad Hafeez, were deposited into the stands as Rahul reached his fifty off 69 balls.

Put under the pump early, Pakistan missed a couple of run-out chances to add to their woes. A massive mix up between Rohit and Rahul saw Rohit scamper for a second run only to be refused by Rahul. He was three-fourths the way down the pitch but the throw came to the wrong end.

Two overs later, it was Rahul hurrying to complete a quick single, but another wayward throw zipped past skipper Sarfraz Ahmed. After 23 wicketless overs, Wahab Riaz finally landed the blow Pakistan so desperately sought when Rahul drove to Babar at cover.

Rohit and Kohli put together 98 for the second wicket. Rohit completed his 24th hundred off 85 balls – his second-quickest in ODIs. Once the 100 was achieved, Rohit went full throttle, hitting three boundaries in a space of 10 balls off Wahab but played an ambitious scoop to perish.

Kohli accelerated once Rohit departed and brought up his half-century before hitting Amir down the ground. He continued to topple records, becoming the quickest to reach 11000 ODI runs – in 222 innings with successive boundaries off Ali.

Pandya entertained with a 19-ball 26 before his stay was cut short by Amir. The audience’s euphoria of MS Dhoni walking out was short-lived as he nicked Amir to give him a second wicket. With India thundering towards a 350-plus total, a rain intervention broke Kohli’s flow as he offered a feather to Sarfaraz off Amir.

Considering Pakistan’s vulnerability in chasing big totals, Jasprit Bumrah and Bhuvneshwar Kumar began well, operating on a tight line to keep Imam Ul Haq and Fakhar Zaman on their toes. However, early in the innings, Bhuvneshwar walked off the field due to tightness in his left hamstring. Pakistan should have seen it as an opportunity. But for India, it was a blessing in disguise as Shankar, filling in for Bhuvneshwar, struck first ball and Imam was out leg before.

Although Babar and Fakhar batted tenaciously, the rate at which they scored remained a concern. In 16 overs, they took Pakistan to 75 for 1, by when the required rate has shot to more than 7.5 an over.

Sensing urgency, both got a move on and took Kuldeep and Yuzvendra Chahal for 26 runs in their first three overs. Fakhar cleared his front leg and swung for the fences. He slog-swept Chahal to clear the boundary to bring up his fifty off 59 balls. Babar didn’t hold back either. He swept Chahal over deep extra while cutting Bumrah towards point and driving Pandya down the ground.

Two runs short of his half-century, Kuldeep returned and got one to sneak through bat and pad. Next over, Fakhar top-edged a sweep and it went to Chahal at short fine-leg. Two balls, two wickets, and Pakistan had lost their two set batsmen. From there, Pandya and Shankar took over and sent back the two experienced players. Hafeez flicked Pandya a little too well to find Shankar at deep square while Malik played on – first-ball duck to follow a second-ball blob against Australia.

At 129 for 5, Sarfraz and Wasim added 36 runs before the Pakistan captain played on to Shankar. Shortly after his dismissal, showers came on for the third time, this time putting the game to an end with Pakistan way behind the equation as per the Duckworth-Lewis. When play resumed, Imad struck a couple of blows to ensure Pakistan didn’t get bowled out.