Saturday’s fixtures will see Jersey face Scotland at Excelsior ’20, France take on the Netherlands in Voorburg and Denmark locking horns with Ireland at VOC. 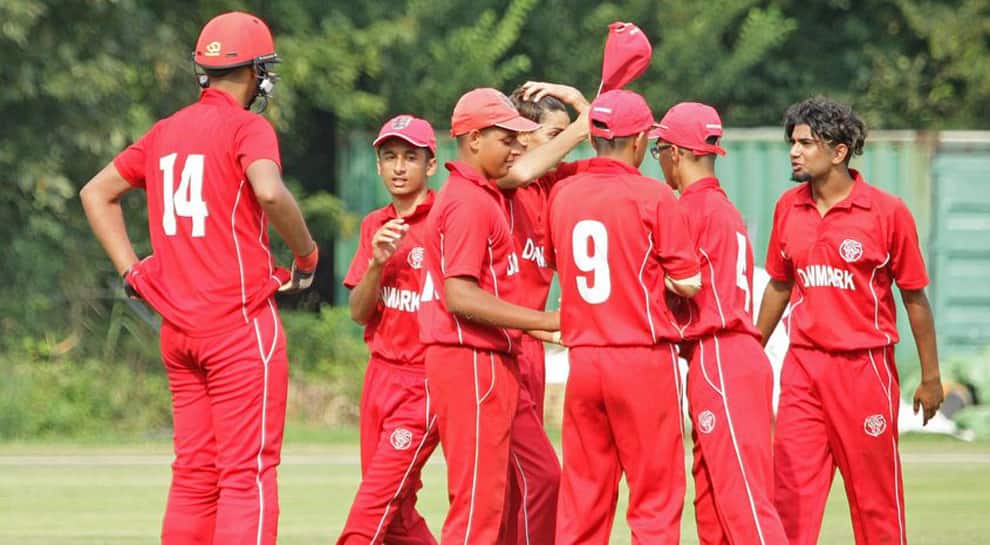 The International Cricket Council (ICC) Under-19 Cricket World Cup Europe Qualifier started on Friday in uncharacteristically hot conditions in the Netherlands. With the temperature reaching record highs in many parts of Europe, the teams were tasked with battling the conditions as well as the opposition.

On the fields of Excelsior ’20 in Schiedam, it was Denmark who won the toss and chose to bat first against France. Both teams were keen to put their stamp on the tournament with a win on the opening day after gaining promotion from the Europe Division 2 last year.

Denmark showed positive intent with the bat, building partnerships despite the regular loss of wickets. It was opener Musa Shaheen (130 runs) who formed the backbone of the innings, scoring a fine century and batting through to the 50th over to get the Denmark total to 259 all out.

France made a cautious start in their chase, reaching 50 in the 14th over before both openers fell in quick succession. Another flurry of wickets shortly after left France on 95 for 5 in the 30th over. Middle-order batter Momtaz Nasseri top-scored for France as he worked the ball around for his innings of 50* in the fightback. France ended their innings on 192/8, 67 runs short of the Denmark total.

Meanwhile in Voorburg, a similar scenario unfolded with Ireland winning the toss and choosing to set a score against Jersey.

Jersey turned in a spirited performance with the ball early on and had the Irish in trouble at 67/4. Smale led the fightback, with a patient 66 until he was undone by the leg-spin of Zak Tribe.

Contributions from the middle order meant that the Irish total ended on 219 for 9 off 50 overs. Carnegie was the pick of the bowlers for Jersey with 3 wickets for 49 in his 10 overs, supported by an economical spell by his captain Harrison Carlyon (1/18 off 10 overs).

In the reply, Jersey struggled for runs in the early overs and lost wickets attempting to up the scoring rate to a fired-up Irish side. Finding themselves on 68/6 in the 24th over, the Jersey batters were left with a mountain to climb to get near to the Ireland total of 219.

A fighting performance from the lower order got the total to over 100, ending on 106 all out in the 35th over. Jamie Forbes (5/19 off 7.1 overs) secured a five-wicket haul for Ireland on the final ball, taking the last Jersey wicket to secure the win.

In Rotterdam, on the grounds of VOC, hosts Netherlands faced rivals Scotland in a vital encounter, with Netherlands captain Boris Gorlee winning the toss and choosing to bat in the hot and dry conditions. A wicket in the first over put the Netherlands on the backfoot, but opener Vikramjit Singh (58 runs) combined with Shirase Rasool (25 runs) for an 81-run partnership to get their side back on track.

The dismissal of Singh halted the innings somewhat and despite contributions from Gorlee (33 runs) and Boissevain (18 runs), a collapse ensued to leave the Netherlands stranded on 186 inside 44 overs. Cairns (3/26) and Davidson (3/33) did most of the damage for Scotland.

The early end to the innings meant that Scotland were sent in before lunch to start their chase, losing their first wicket before the interval. Coming back after lunch, Angus Guy (30) and Tomas Mackintosh (91) combined for a solid partnership worth 72 runs. Mackintosh accelerated through his innings, finding the boundary on 13 occasions (10x4, 3x6) to set up the Scottish chase.

Nervy scenes unfolded late in the day as a flurry of wickets halted the Scotland batters in their tracks with 20 runs still to chase. Scotland eventually overtook the Netherlands total in the 47th over with three wickets in hand to secure a crucial win on the opening day.

Saturday’s fixtures will see Jersey face Scotland at Excelsior ’20, France take on the Netherlands in Voorburg and Denmark locking horns with Ireland at VOC.

England bowl out Ireland for 38 to seal victory