Poonam will now look to replicate a similar performance when India take on Bangladesh in their second Group A match at WACA Ground in East Perth on Monday. 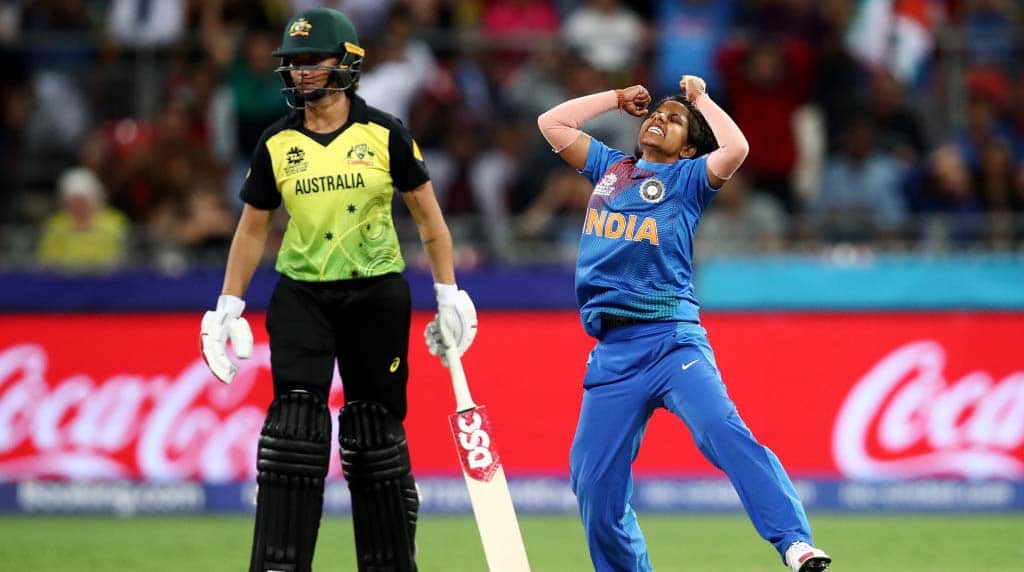 Indian women bowler Poonam Yadav produced brave and brilliant leg-spin bowling to help the Women in Blue tore apart Australia's much-vaunted middle order and guide the side to a comfortable 17-run win over the defending champions in the opening match of the Women's T20 World Cup at Sydney Showground Stadium on Friday.

Defending a low total of 133 runs, Poonam proved to be the tormentor-in-chief for India by bagging terrific figures of four for 19.

It was a sign of Poonam’s unrelenting positivity that fracturing a finger provided her with optimism aplenty.

Injured during a pre-tournament camp, the leg-spinner’s ICC Women’s T20 World Cup 2020 place was thrown into doubt, needing to start again to get ready for Australia.

In doing so she missed the preparatory tri-series. But with the way she bamboozled Australia so comprehensively in the tournament opener, her absence may have been a blessing rather than a curse.

“I did not know myself it would turn out to be this bad. After the injury I focused on the diet and on fitness.I was confident I could bowl at any time. Raman Sir [WV Raman, India head coach] asked if I was mentally ready.I told him mentally I was, but it was also necessary for me to be physically prepared,' the International Cricket Council (ICC) press release quoted Poonam as saying.

“Within myself I had the belief I would make the comeback in time. The good thing is I got hurt about one-and-a-half months before the World Cup.God is great - whatever bad had to happen has already happened," she added.

Australia were cruising at 58 for two when Yadav was introduced in the ninth over, with skipper Harmanpreet Kaur holding her back as long as possible.

Alyssa Healy, back to form with 51, took a liking to the leg-spinner’s full-toss but next ball she perished, a 63kph leg-break punched back to the bowler.

Even then, 66 required off the final 10 with seven wickets in hand, Australia looked comfortable and assured.

But Poonam is not India’s leading Women's T20I wicket-taker for nothing, her final three overs captivating the 13,432 in place at the Sydney Showground and every ball was an event in itself.

Ashleigh Gardner belted ball No.7 for four but thereon Yadav took over. Rachael Haynes deceived in flight to be stumped before Ellyse Perry was duped by a wrong’un.

Had the ball stuck in Tanya Bhatia’s hand then the leg-spinner would have had a quite wonderful hat-trick, but no matter.

Jess Jonassen was the fourth and final victim, a thin edge seeing Bhatia atone, with the pain Yadav felt on a fully-bandaged finger replaced solely by adrenaline.

With a small stature and desire to float the ball high, Yadav’s style is not a replicable one in the women’s game – with Healy admitting that while Australia had the preparation, they lacked execution.

“She bowled that first over pretty regulation as a leg-spinner and then slowed it up immensely after that, so we probably just didn't adapt to that well enough,” she said. “We've planned for that. We just didn't probably play as smart as what we should have.

“Obviously we don't get leg-spinners coming out at 60kph very often, and she's incredibly skilful at that. It was more the individual batters," Poonam added.

Kaur has spoken about how over-reliance on one player is no longer an option. And with Poonam’s display, it’s easy to overlook the efforts of Shikha Pandey and Rajeshwari Gayakwad with the early breakthroughs.

“She's someone who always bowls for the team, and it's not easy to play because she's a little slower in the air, but in T20 format she loves to bowl with a nice lead,” Kaur said of Yadav. “When you have to hit her, you need to show some patience, and you need to have very good skill.

“I think that is a reason we kept her bowling, and we gave her when we needed a wicket, and she did a great job.You get one wicket then you can always turn the game for you, and that's what happened," Kaur said.

Poonam’s work in recent times has also been supported by Narendra Hirwani, the India leg-spinner who took 16 wickets on Test debut against the fearsome West Indies in 1988.

Australia were eventually bundled out for 115 runs in 19.5 overs as they were answerless to her wrong’un, one change-up was all that was needed to complete a stunning start to the Women’s T20 World Cup.

Poonam will now look to replicate a similar performance when India take on Bangladesh in their second Group A match at WACA Ground in East Perth on Monday.

Ravindra Jadeja a rockstar, want to play cricket like him: Ashton Agar