ICC World Cup 2019: Imran Tahir proves that age is no boundary for skill and enthusiasm

South Africa’s premier leg-spinner dived low to his right and plucked the ball just millimeters from the ground. 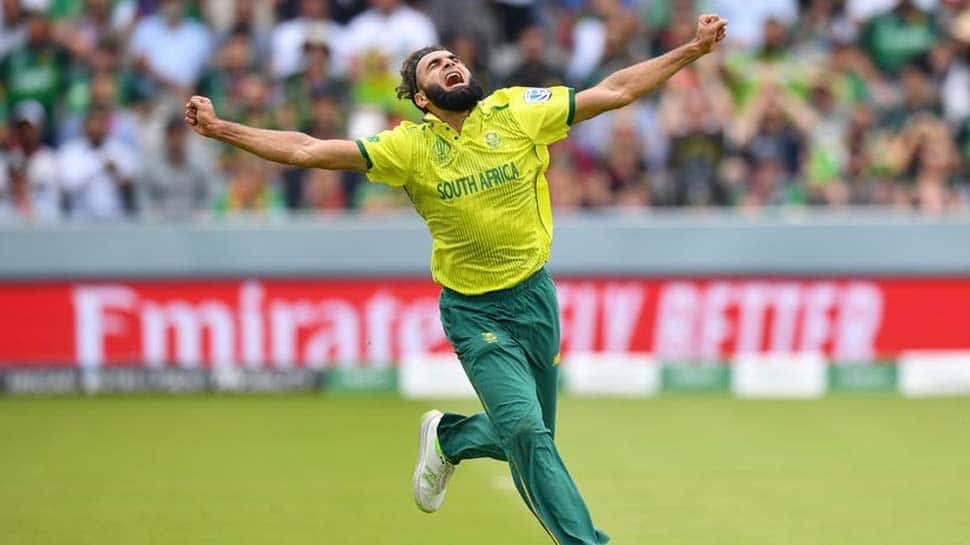 South Africa’s premier leg-spinner dived low to his right and plucked the ball just millimeters from the ground.

It was as athletic a caught & bowled as you’ll see this tournament and sent a disbelieving Imam-ul-Haq back to the hutch for 44.

Immediately after the catch, for a South African record 39th time in an ICC Men’s Cricket World Cup match, the Tahir train left the station and chugged excitedly around the Lord’s infield.

At 40 years of age, Imran Tahir is the oldest player at this World Cup. For context, the competition’s youngest cricketer – 18-year-old Mujeeb Ur Rahman of Afghanistan – was born more than four years after Tahir made his first-class debut, as per ICC press release.

So, it’s almost poetic that he celebrates wickets with more unadulterated, childlike glee than every one of his younger contemporaries.

The enthusiastic manner in which he wheels away and sprints, endearingly aimlessly but with arms spread wide, further than most quick bowlers’ run-ups, is infectious.

Just ask Babar Azam – who couldn’t help but smile from the non-striker’s end at his opponent’s jubilation.

But even by Tahir’s standards, this celebration seemed to contain more vim and vigour than normal.

Perhaps it was because he had just pulled off a reaction catch with a high degree of difficulty that most 20 or 30-year-olds, let alone 40-year-olds, would struggle to make.

Perhaps it was because the wicket came against Pakistan – the country of his birth and team for which he played Under-19 and A-grade cricket in a previous century.

Perhaps it was because, having announced his retirement from ODI cricket at the end of this World Cup, he knows there won’t be many more moments like this on the grandest stage.

Or perhaps it was because he had just surpassed the great Allan Donald’s to become the leading South African wicket-taker of all-time at World Cups with 39.

Most likely, it was a combination of all these and as he prepares to ride off into the sunset, it’s worth reflecting on just how remarkable it is that Tahir became a South African record-breaker.

Some players are earmarked for greatness from an early age but the leg-spinner didn’t make his ODI debut until February 2011 – just a month before his 32nd birthday.

It’s fair to say he swiftly made up for lost time.

He was the quickest South African bowler to reach 100 ODI wickets, taking just 58 matches, and is still the only spinner to do so.

He became his country’s first player to take a seven-for in a one-day international when he ended with 7/45 against West Indies in 2016 and perhaps his finest moment in a Proteas jersey was the man-of-the-match-winning 4/26 in the ICC Men’s Cricket World Cup 2015 quarter-final with Sri Lanka.

In England this summer, he has continued to rack up the milestones: the oldest South African to appear in a World Cup match, playing his 100th ODI against Bangladesh, the first spinner – of any nationality – to bowl the first over of a World Cup match, and now leapfrogging every one of his countrymen atop the World Cup wickets ranking.

At Lord’s, in addition to his athletic exploits to remove Imam, Tahir also had Pakistan’s other opener, Fakhar Zaman, caught at first slip attempting an ill-advised ramp shot to end with figures of 2/41.

His ninth and tenth victims of the competition mean he currently has the most wickets of any wrist-spinner at the event – just another record to add to his CV.

His efforts ultimately weren’t enough to stop Pakistan racking up an intimidating total of 308/7 that South Africa were unable to chase down – and defeat means their chances of reaching the knockout stages are now over.

As a result, the Tahir train will only have two final chances to get up to speed, so make sure you catch it while you still can.