It was like turning back time in Nottingham on Friday at the ICC Men’s Cricket World Cup 2019, as the modern-day West Indies evoked memories of their fearsome four-pronged pace attack of the 1980s by skittling out Pakistan for just 105 in only 21.4 overs. 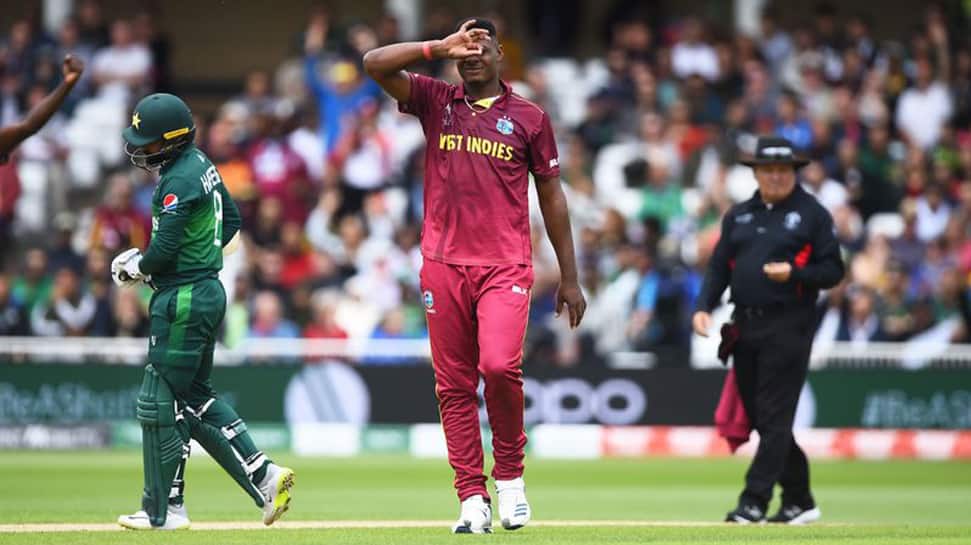 It was like turning back time in Nottingham on Friday at the ICC Men’s Cricket World Cup 2019, as the modern-day West Indies evoked memories of their fearsome four-pronged pace attack of the 1980s by skittling out Pakistan for just 105 in only 21.4 overs.

Perhaps captain Holder offered a clue as to what he had in store for the beleaguered Pakistanis when he said after winning the toss and electing to bowl first, “Everybody is playing with a smile on their face and that’s how we play our best cricket”.

Well, his team quickly turned into the smiling assassins as they charged around the outfield, high-fiving in wild celebration at the quickfire clatter of wickets.

Fakhar Zaman provided some early fireworks for Pakistan by clipping Holder for six over square leg and smashing Cottrell for four over extra cover.

But the Pakistan collapse began when Fakhar hooked a short ball from Russell and could only look on in agony as the ball dropped slowly to the turf and dribbled into his stumps.

The West Indian paceman broke the hearts of the opposition when he removed Haris Sohail with another bouncer and Russell almost reached the long-leg fielder as he galloped round the ground punching the air with joy.

Holder, surprisingly, decided to take Russell out of the attack after he claimed two wickets for four runs in a hostile three-over spell during which he delivered 16 straight short-pitched balls.

Not to be outdone by the quickies, wicketkeeper Shai Hope then produced a catch to rival England all-rounder Ben Stokes’s spectacular opening-day effort when he went flying to his right to pouch a thick edge by Babar Ali off Thomas.

Mohammad Hafeez provided brief hope for Sarfaraz’s side when he struck Thomas for two straight fours, but the captain gloved a short-ball from Holder to Hope down the leg side. It was originally given not out but the decision was overturned when television replays showed the ball had flicked the skipper’s glove on the way through.

Holder followed up with a second wicket in the same over before Shadab Khan gave a clue as to what sort of resistance he might offer when he dropped his bat on the way out to the middle.

Sure enough, the Pakistan tail-ender was out first ball before Holder made it three wickets in nine deliveries when Hassan Ali lobbed the ball up to mid-on for Cottrell to take the easiest of catches, the fielder celebrating with a trademark military-style salute.

Cottrell got in on the act again when, after the umpteenth short-pitched ball of the innings, he dived full length to take another catch inches off the ground to remove Hafeez.

Wahab Riaz, batting at No. 10, offered fleeting resistance by smashing Holder for two sixes and a four in the same over but Pakistan’s misery was complete when he backed away from the stumps once too often and was clean bowled by Thomas.

After finishing with figures of 4-27 in 5.4 overs, a jubilant Thomas said: “This is a new experience for me, it being my first World Cup. I was confident of running in and doing my job.

“Andre started the job for us, I just followed in his footsteps today. A lot of guys tried to mix it up with short balls. We wanted to execute our plans well."