Virat Kohli switched gears towards the end of the innings as India fetched 69 in the final five overs. Out of the 69, 49 from 17 balls came from the Indian skipper's bat. 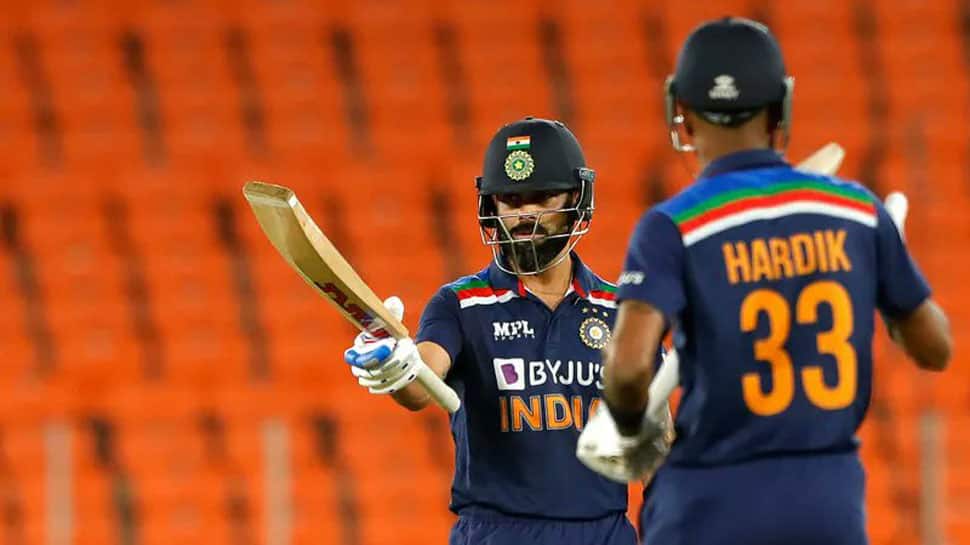 Virat Kohli-led India's fightback after the hosts got off to a dreadful start in the third T20I against England at the Narendra Modi Stadium in Ahmedabad. However, Kohli's unbeaten knock of 77 helped the hosts recover as India piled a challenging 156/6 in their 20 overs. This was also Kohli's second half-century in consecutive T20Is and his 27th in this format.

The Indian skipper started his innings on a cautious note, as the hosts were reeling at 24/3 in 5.2 overs. However, Kohli switched gears towards the end of the innings as India fetched 69 in the final five overs. Out of the 69, 49 from 17 balls came from Kohli's bat. During the course, Kohli also smacked 17 runs in the 18th over bowled by Mark Wood, which included two sixes and a four.

The late power-hitting also saw Hardik Pandya providing the perfect support to his skipper. Together, the pair added 70 runs for the sixth wicket.

Several former cricketers joined on Twitter to laud the Indian skipper for his brilliant rescue work. Here are a few tweets:

This has been a masterclass from Virat Kohli. If you're a young batsman anywhere in the world, watch this innings again but with a notebook and a pen. #INDvENG pic.twitter.com/VjKQcdWzmj

That was special from Kohli. 49 of his last 17 balls.
Garza Garza Sher Garza#INDvENG pic.twitter.com/RwwhRY3lrA

When the going gets tough, the tough get going

Genius @imVkohli !! Of all the great players he is the most pleasing on the eye ... #INDvENG

The five-match series is squared at 1-1.