Australia defeated India by three wickets in a thrilling T20I on Sunday, chasing down a target of 127 off the final delivery. 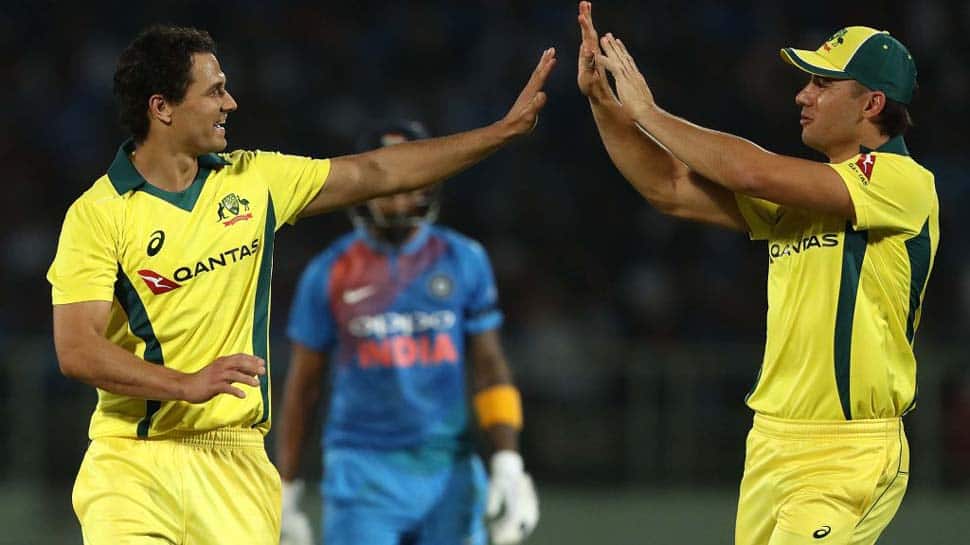 Australia defeated India by three wickets in a thrilling T20I on Sunday. India managed a total of only 126 for 7 in their 20 overs against Australia despite a half-century from comeback man KL Rahul.

Barring opener Rahul's 50 off 36 balls and Mahendra Singh Dhoni's unbeaten 29 off 37 balls, none of the other Indian batsmen could manage a significant knock. For Australia, Nathan Coulter-Nile picked 3 wickets for 26 runs in his four overs.

Glenn Maxwell top-scored for Australia with a 43-ball 56. Jasprit Bumrah was the key wicket-taker for India, accounting for three wickets.

# Australia win the clash by three wickets following a double off the last delivery!

# Australia need 13 runs off five deliveries with the final over set to be bowled by Umesh Yadav!

# Jasprit Bumrah set to bowl the 19th over!

# Markande is set to bowl his final over!

# Nathan Coulter Nile is the new batsman in!

# Krunal Pandya is set to bowl the over!

# Umesh Yadav set to bowl his third over!

# Debutant Peter Handscomb is the new man in!

# Wicket! Maxwell departs for 56 as Australia lose third wicket following a mistimed shot by the batsman which Rahul makes no mistakes with! Australia 89/3 (13.3 overs)

# Umesh Yadav is set to bowl his second over!

# Australia 78/2 (12 overs) as Australia score seven runs off the third over bowled by Yuzvendra Chahal!

# Just four singles off the over as Krunal Pandya bowls a tight length!

# Krunal Pandya bowls his third over!

# Markande to bowl his second over!

# Krunal Pandya will bowl his second over!

# 7 runs off the over following a boundary off the last delivery. Australia 51/2 (8 overs)

#Mayank Markande, who is the 79th T20I player to represent India, will bowl his first over!

# 13 runs off the over following a six and a boundary off the first two deliveries of the over! Australia 41/2 (6 overs)

# Yuzvendra Chahal set to bowl his first over!

# Australia 28/2 as Short scores his second boundary off the fifth delivery of the over!

# Bumrah back for his second over!

#Maxwell off the mark with a boundary as Australia reach 9/2 at the end of the third over! Australia 9/2 (3 overs)

# Glenn Maxwell is the next batsman in!

# Wicket! Finch departs for a duck as Bumrah dismisses Finch lbw off an in-coming delivery which keeps a touch low and raps the front leg. Australia 5/2 (2.4 overs)

# Jasprit Bumrah will bowl his second over!

# Aaron Finch is the new man in!

# Wicket! Marcus Stoinis departs for 1 following a throw by Umesh Yadav which has resulted in run-out, with Australia losing the first wicket! Australia 5/1 (2 overs)

# Just a single off the over

#Yuzvendra Chahal will bowl the second over!

# Jasprit Bumrah will bowl the first over for Australia!

# Coulter Nile will bowl the final over!

# Just three runs off the 19th over as Dhoni struggles to time the ball effectively! India 118/7 (19th over)

# Cummins is set to bowl his final over!

# Jhye Richardson is set to bowl his final over!

# Yuzvendra Chahal makes his way down to the crease!

# Wicket! Umesh Yadav departs for 2 as Cummins strikes with the ball, dismissing him lbw off a seaming delivery! India 109/7 (16.5 overs)

# Cummins will be bowling the 17th over!

# Umesh Yadav is the next batsman in!

# Wicket! India lose their sixth wicket as Krunal Pandya attempts a big shot off a short delivery bowled by Coulter Nile but fails to connect effectively, resulting in a catch to Glenn Maxwell. India 100/6 (14.6 overs)

# Coulter Nile is set to bowl his 3rd over with five overs left in the Indian innings!

# Zampa to bowl his third over!

# Krunal Pandya is the next batsman in!

# Wicket! 2 wickets in the over for Nathan Coulter Nile who dismisses Karthik off a back of the length delivery, with India five down at this stage! Australia 94/5 (13 overs)

# Dinesh Karthik is the next batsman in!

# Wicket! Rahul departs for 50 as he makes room to hit the length delivery over mid-off, but fails to land the ball with proper connect, resulting in a catch to Aaron Finch! Australia 92/4 (12.2 overs)

# Pat Cummins is set to bowl his second over!

#MSD is the next batsman for India!

# Wicket! Rishabh Pant departs for 3 following a spectacular run-out on the back of a superb fielding effort by Jason Behendroff. India 80/3 (10 overs)

# DÁrcy Short has been brought into the attack!

# Rishabh Pant is the next batsman in!

#Wicket! Kohli departs for 24 after attempting to smash a length delivery bowled by Adam Zampa for a big shot, but failing to land anything but a catch to Nathan Coulter Nile. India 69/2 (8.4 overs)

# Adam Zampa is set to bowl his second over and the ninth over of the Australian innings!

# 6 runs off the first over bowled by Pat Cummins as India reach 65/1 after 8 overs!

# Kohli is just two runs away from becoming the first batsman to score 500 runs in T20 Internationals against Australia!

# Rahul continues to attack despite the early dismissal of Rohit Sharma with 11 runs off the fourth over bowled by Richardson! India 26/1 (4 overs)

# Virat Kohli is the next batsman in!

#Wicket! Rohit Sharma departs for 5 after attempting a cheeky paddle off a length delivery which fails to clear Zampa! India 14/1 (2.3 overs)

# Behendroff to continue with the ball!

# 11 runs off the over as Rahul smacks two boundaries off the second over bowled by Richardson, India 12/0 (2 overs)

# Jhye Richardson is set to bowl from the other end!

# Jason Behendroff will open the bowling for Australia!

# The Indian openers Rohit Sharma and KL Rahul have walked down to the crease!

# The players have walked down to the pitch for the national anthems!

#Umesh Yadav has been included in the side in place of Bhuvneshwar Kumar!

# Shikhar Dhawan has been rested for the match with KL Rahul set to open the innings for India instead!

# Australian captain Aaron Finch has won the toss and opted to field!

#The toss is set to take place shortly!

Hello and welcome to Vizag. We are all set for the 1st T20I #TeamIndia #INDvAUS pic.twitter.com/J13dEOAn0j

# Peter Handscomb to make his T20I debut tonight, No.94 for Australia as well!

Peter Handscomb to make his T20I debut tonight, No.94 for Australia. Marcus Stoinis had the honour of presenting Handscomb with his maiden cap. #INDvAUS pic.twitter.com/8yEhAJ1F2P

# Mayank Markande is set to make his T20I debut for Team India!

Mayank Markande all set to make his T20I debut for #TeamIndia #AUSvIND pic.twitter.com/Ogv0V1iHzO

With a few months left to the commencement of 2019 ICC World Cup, the Indian men's cricket team will begin their final limited-overs assignment before the mega event with the first T20I against Australia at the ACA-VDCA Cricket Stadium in Visakhapatnam on Sunday.

India will be boosted by the return of their star skipper Virat Kohli, who was rested for the last two ODIs and three-match T20I series against New Zealand as a part of the Board of Control for Cricket in India's (BCCI) workload management.

While Jasprit Bumrah has also made a comeback in the limited-overs fray, all-rounder Hardik Pandya has been ruled out of entire series against Australia due to lower back stiffness.

The BCCI has decided not to name any replacement of Pandya in the T20I squad, while Ravindra Jadeja has been called in to replace the former in the 15-member ODI squad.

Pandya's absence will give a great opportunity to Vijay Shankar to strengthen his case for selection in India's World Cup squad.

Meanwhile, Dinesh Karthik will also have a point to prove to the national selectors in the two-match T20I series after being left out of the subsequent ODIs against Australia.

For Australia, Pat Cummins has been brought back into the squad and he will lead the pace bowling attack along with Nathan Coulter-Nile and Jhye Richardson.

However, it is to be seen whether Australia will play Adam Zampa as the spinner or opt for experienced Nathan Lyon.

India will head into the limited-overs home series against Australia on the back of a 4-1 win in the five-match ODI series and a narrow 1-2 defeat in the three T20Is against New Zealand.

In January, Kohli's side became the first Indian team ever to clinch bilateral Test series and ODI series win in Australia. The visitors sealed the two series by 2-1, while they settled with a 1-1 draw in the T20I series.

Australia, on the other hand, are coming on the back of their recent 2-0 win in the three-match T20I series against Sri Lanka. The tourists will look to take revenge of their home defeat to India when the two sides head into the upcoming series.

We can go out there and put things right: English pacer Anya Shrubsole