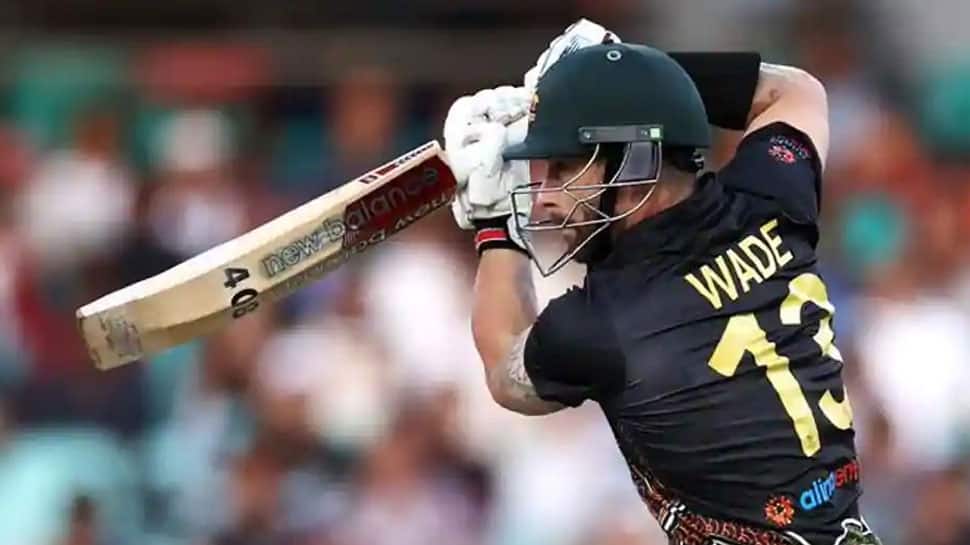 Sydney: Australia scored 186 for five in the third and final T20 International against Team India here on Tuesday (December 8, 2020). Sent in to bat, Matthew Wade top-scored for the hosts with a brilliant 80 off 53 balls.

Wade, who has played all his big T20 knocks against India, smashed his way to 80 off 53 balls with the help of seven fours and two sixes. Matthew Wade's second consecutive half-century was well-complemented by Glenn Maxwell's blazing strokeplay as Australia posted the competitive score against India in the final T20 International in Sydney.

Maxwell, who appeared to be struggling with his timing initially, also got into the act during the last six overs with a 35-ball-54 and a third-wicket stand of 90 runs in 8.4 overs with Wade.

India's bowling heroes were Washington Sundar (2/34 in 4 overs) and Thangarasu Natarajan (1/33 in 4 overs). Natarajan, despite a few boundaries conceded in the final over, was pretty impressive. Wade's audacious strokeplay had its share of streakiness and some between long-on and square leg were simply breath-taking.

To add to India's misery, Virat Kohli's failure to call for DRS in stipulated 15 seconds cost the team Wade's wicket just after he had completed his 50. Replays showed that Natarajan had trapped him plumb in-front.

If that wasn't enough, Yuzvendra Chahal (0/41 in 4 overs) outfoxed Maxwell to induce a skier which KL Rahul pouched but to his horror found that the bowler had overstepped.

The Australian innings largely dominated by Wade's power-hitting after Sundar got rid of Aaron Finch (0) very cheaply. The wicketkeeper-batsman was quick to bring out his pull-shot and the whipped flick whenever anything was pitched in the arc.

He was the dominant partner during the 65-run stand with a scratchy Steve Smith (24) but played the second fiddle once Maxwell got his touchback. For Maxwell, the 15th over by Chahal was the one that changed the course. Once he got the reprieve, he deposited Chahal for a straight six and followed it with another into the mid-wicket stands.

Riding on his luck, he got another "life" in the 17th over when a mis-hit was dropped by Deepak Chahar running in from deep point. Between overs 13th to 18th, Australia racked up 68 runs. In the final two overs Shardul Thakur (1/43) and Natarajan dismissed the two set batsmen and final two overs went for only 18 runs.

Virat Kohli initially won the toss and elected to field. Ahead of the final match, Australia made a team change from their playing XI in the second T20I. Captain Aaron Finch returned to the roster, and Marcus Stoinis was excluded.

India currently lead the three-match series, 2-0. The visitors are aiming for a second series sweep in the shortest format of the game over the past four years. India had last swept Australia 3-0 back in 2016 in a T20I series down under played only less than two months ahead of the T20 World Cup that year.

Moreover, in the last three bilateral T20I series played between the two teams Australia have won one while the other two have been tied. Interestingly, Virat Kohli’s team is also just a win away from overtaking second-placed Australia in the ICC World T20 rankings.

If India manages to win on Tuesday, they will climb to the second position, overtaking Australia in the process. According to ICC’s Team Rankings Predictor, India will get two points for the win. Australia, on the other hand, will lose two points.

Currently, England holds the No.1 spot in the shortest format of the game with 275 rating points in 25 matches.

India on Sunday had surpassed Pakistan’s winning streak after extending its T20 unbeaten record to 10. They are now placed third in the list behind Afghanistan, who acquires both No.1 and 2 spots.

A win on Tuesday, however, will extend India’s streak to 11 equalling Afghanistan’s record. Overall, Afghanistan holds the record of the most consecutive wins in T20Is – having won 12 T20Is from 2018 to 2019.