Australia reached 236/6 in their first innings before rain played the spoilsport and called off the third day's play of the series-deciding fourth and final Test at the SCG on Saturday. 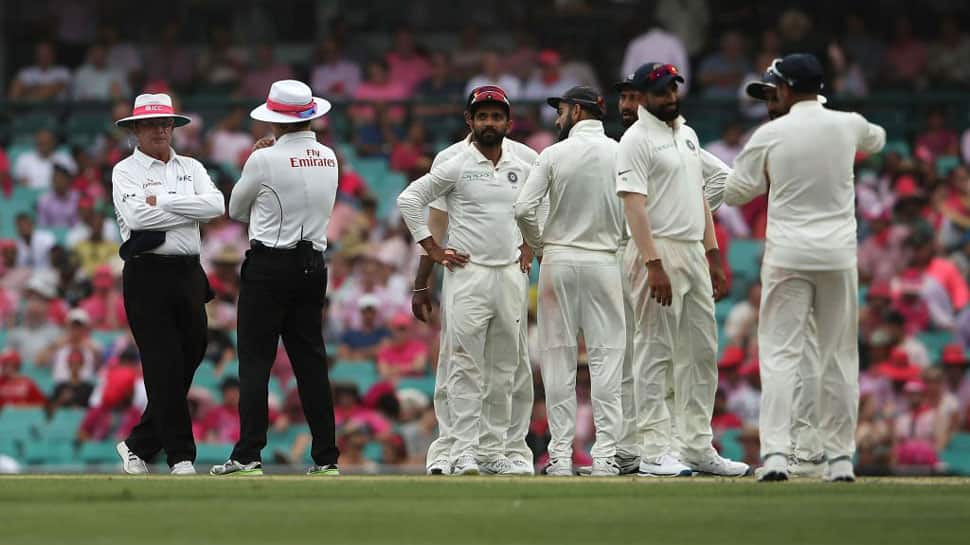 Australia reached 236-6 in their first innings before rain played the spoilsport and called off the third day's play of the series-deciding fourth and final Test at the Sydney Cricket Ground (SCG) on Saturday.

At stumps, Australia were still trailing India by 386 runs, with Peter Handscomb (28) and Pat Cummins (25) batting for the hosts.

Earlier, resuming at the overnight score of 24-0, Australia made a decent start to their innings this morning as Marcus Harris pulled back a crucial partnership of 72 runs with Usman Khawaja for the opening wicket.

However, Kuldeep Yadav provided India with a much-needed breakthrough in the 21st over of the match when he dismissed Khawaja for 27.

Harris then joined forces with Marnus Labuschagne (38) and went on to stitch a 56-run stand for the second wicket besides also bringing up his second Test half-century.

Meanwhile, Travis Head stayed for some time at the crease, but didn't manage to add much runs to Australia's tally as he departed for 20 runs after facing 56 balls.

For India, Kuldeep Yadav was pick of the bowlers as he finished the day with the figures of three for 71, followed by Ravindra Jadeja's two for 62. Meanwhile, Mohammed Shami displayed a disciplined performance with the ball but managed to add just a wicket to his tally.

Earlier, India declared their first-innings at a gigantic score of 622 for seven after some incredible batting performances from Mayank Agarwal (77), Cheteshwar Pujara (193), Rishabh Pant (159) and Ravindra Jadeja (81).

Here are the live highlights:

UPDATE - Play has been abandoned at the SCG with play on Day 4 & 5 to commence at 10 am local.

# The match has been delayed due to rain in Sydney.

# Bad light stops play! The umpires have decide to stop play as it is really dark at SCG. The players of the two sides have walked off the field. Australia 236/6 (83.3 overs)

Play has been suspended due to bad light. Australia 236/6 with Cummins & Handscomb at the crease #AUSvIND pic.twitter.com/ZbTut86qMO

And now the players are coming off with poor light and rain expected to be on the way #AUSvIND https://t.co/CaiEbSjKbT

# Handscomb (28) is looking pretty comfortable against spin, while Cummins (21) has also settled down at the middle. The duo is looking to build a solid partnership to steady Australia's innings. The new second ball is due, but India decide to continue with the same. Australia 228/6 (81 overs)

# Pat Cummins, who anchored Australia's second innings in the third Test with a crucial 63-run knock, must build a partnership with Peter Handscomb--who is playing very cautiously at the moment--in order to bring the hosts somewhat back into the game. Australia 215/6 (76 overs)

# Wicket! Tim Paine tries to play an expansive drive, but ball spins back and hits the stumps and Kuldeep bags his third wicket. Australia are now down by six wickets. Australia 198/6 (70 overs)

Bowled. Kuldeep strikes again as he spins one back through the gate to knock over captain Paine. Gone for 5.

And, #TeamIndia strike just before Tea as Kuldeep Yadav gets his second. Australia 198/5. Handscomb & Paine to resume final session of play #AUSvIND pic.twitter.com/93VlfqZVpZ

# Wicket! Kuldeep Yadav gets the breakthrough. Head attepts to guide the ball down the ground, but hits it off the toe-end of the bat to evntually hand Kuldeep a low return catch. The hosts are five wickets down minutes before tea. Australia 192/5 (67 overs)

# The Indian bowlers continue to pile pressure by keeping it tight and allowing the Australian batsmen to reverse the ball with just a touch. The hosts are still trailing by 439 runs. Australia 183/4 (64 overs)

# Jadeja and Shami are bowling with discipline as they are not conceding easy runs to the Australians. The hosts have managed to notch just seven runs in their last five overs and they are still trailing India by 461 runs with six wickets in hand. Australia 161/4 (57 overs)

# Peter Handscomb is the new batsman in !

# Wicket! Shami bowls a delivery on the pads and Labuschagne flicks it off towards Ajinkya Rahane, who takes a tough sharp catch at short mid-wicket. Australia are now four wicket down and they still have a long way to go in the game. Meanwhile, the visitors have made a great comeback after lunch. Australia  154/4 (52 overs)

Out. Shami strikes. Rahane takes a blinder as Labuschagne flicks one off his pads. Gone for 38.

# Wicket! Jadeja strikes once again. Shaun Marsh makes a poor shot selection of the first delivery of the 48th over, gets the outside edge of the bat to hand an easy catch to Ajinkya Rahane at first slip. Australia 144/3 (49 overs)

Out. SMarsh has to go as he edges one off Jadeja to Rahane at first slip. He departs for 8.

# Shaun Marsh is the new bastman in for Australia !

# Wicket! Jadeja strikes for India. The visitors have finally got what they are looking for so long, i.e, the wicket of Macus Harris. The Australian opener attempts to play a  square cut late off Jadeja's delivery, but gets the under-edge off his bat and the ball hits the top of leg stump.  Harris departs for 79. Australia 128/2 (43 overs)

Out. A fine knock from Harris ends as he chops one on from Jadeja. Gone for 79.

That's lunch! Great session for the Aussies to be 1-122. Harris (77*) and Labuschagne (18*) to resume after the break: https://t.co/CaiEbSjKbT #AUSvIND pic.twitter.com/aSVXoBGtps

# Harris is steadily moving towards his century and he is getting a good support from third drop Labuschagne. India, on the other hand, have introduced Mohammed Shami into the attack as they look to bag a few wickets to takefull control of the match. Australia 114/1 (36 overs)

# Kuldeep Yadav was quite expensive for India in his last three overs as he ended up conceding 21 runs. It seems that the wicket has not hampered Australia's spirit as Harris and Labuschagne are scoring runs quite quickly against Jadeja and Yadav. The hosts are trailing by 519 runs. Australia 103/1 (31 overs)

# Harris continues to stand strong at the crease as he brings up his second Test half-century off just 67 balls. He achieves the feat by scoring a single off Bumrah's first delivery of the 24th over. However, Australia are still trailing by 542 runs with nine wickets in hand. Australia 80/1 (25 overs)

FIFTY! A quality start from Marcus Harris as he brings up his second Test half-century from 67 balls #AUSvIND https://t.co/CaiEbSjKbT

# Marnus Labuschagne comes to bat at No.3 for Australia!

# Wicket! Kuldeep Yadav has finally provided the much-needed breakthrough to India by dismissing Khawaja for 27. Soon after the Australian opener completed a 50-run stand with Harris, Khawaja comes down the track and attempts to smoke a Kuldeep delivery through the leg side, but ends up giving a straight forward catch to Cheteshwar Pujara at  short mid-wicket. Australia 72/1 (22 overs)

Out. Khawaja looks to attack and he hits that Kuldeep delivery straight to Pujara at mid-wicket. Gone for 27.

Kuldeep strikes and gets the 1st wicket of the morning. Australia 80/1 at the moment #AUSvIND #TeamIndia pic.twitter.com/GhbkcB3yn9

# Runs have started flowing in at a good pace for the hosts as Harris (44) and Khawaja (26) bring up a fifty-run partnership for the opening-wicket. Meanwhile, Harris is also approaching towards his half-century. Indian skipper Virat Kohli can be seen making frequent changes in his bowling attack as the visitors desperately look to break the stand. Australia 70/0 (21 overs)

#  Harris and Khawaja have made a cautious start to Australia's innings this morning. The duo is looking quite comfortable at the crease, but they have to bat really well in order to bring the hosts back into the game. The Indian bowlers, on the other hand, are looking for an early breakthrough. The visitors have also introduced Ravindra Jadeja into the attack in order to break Australia's opening-wicket stand. Australia 47/0 (16 overs)

# Jasprit Bumrah will begin the proceedings for India!

# Marcus Harris and Usman Khawaja have walked down the crease to resume Australia's innings.

Let's play! Harris and Khawaja are out in the middle to begin day three with Australia 0-24 #AUSvIND https://t.co/CaiEbSjKbT

# The second day's play is all set to get underway!

Australia ended the second day's play of the series-deciding fourth Test against India on 24-0 at the Sydney Cricket Ground (SCG) on Monday, still the visitors by 598 runs from their first innings.

At the end of the day's play, openers Marcus Harris and Usman Khawaja were batting at the crease at their respective scores of 19 and five after India declared their first innings at 622-7.

India had a great chance to make the breakthrough as early as in the second over of Australia's first innings when Khawaja edged one off Mohammed Shami's delivery to Rishabh Pant, who missed the catch.

Earlier, resuming at the overnight score of 303-4, Pujara continued his good show with the bat as he not only struck a blistering 193-run knock but also shared crucial partnerships of 101 runs and 89 runs with Hanuma Vihari and Rishabh Pant, respectively to guide India past 400-run mark before eventually falling seven runs short of a double ton.

Many records were broken during India's incredible first innings.

En route to Pujara's epic innings, he broke a 90-year-old record of most deliveries faced by a visiting cricketer in a Test series in Australia.

Pujara batted for more than 1,257 deliveries in the ongoing series to join the list of the Indian batsmen to have faced more than 1,000 deliveries . He has also surpassed Rahul Dravid's record of 1,203 balls faced in 2003-2004 runs.

Pujara had also become the ninth Indian batsman to score 150 runs in an innings Down Under and only the second from the country to bring up a 150-run knock at number third spot in Australia.

Following Pujara's dismissal, Pant notched up his second Test century before crossing the 150-run mark to become only the fourth Indian wicketkeeper to achieve the feat. The Indian wicket-keeper batsman also shared a huge 204-run partnership with Jadeja (81) which is the highest-ever stand for the seventh wicket in Australia.

While Pant remained unbeaten on 158 runs, Jadeja departed for 81 off Nathan Lyon's delivery as India declared their innings at 622/7.

For Australia, Lyon was the pick of the bowlers for his figures of four for 178 while Josh Hazlewood and Mitchell Starc finished wth two and a wicket, respectively.

Cheteshwar Pujara may join Virat Kohli, others in A+ category for stellar show Down Under