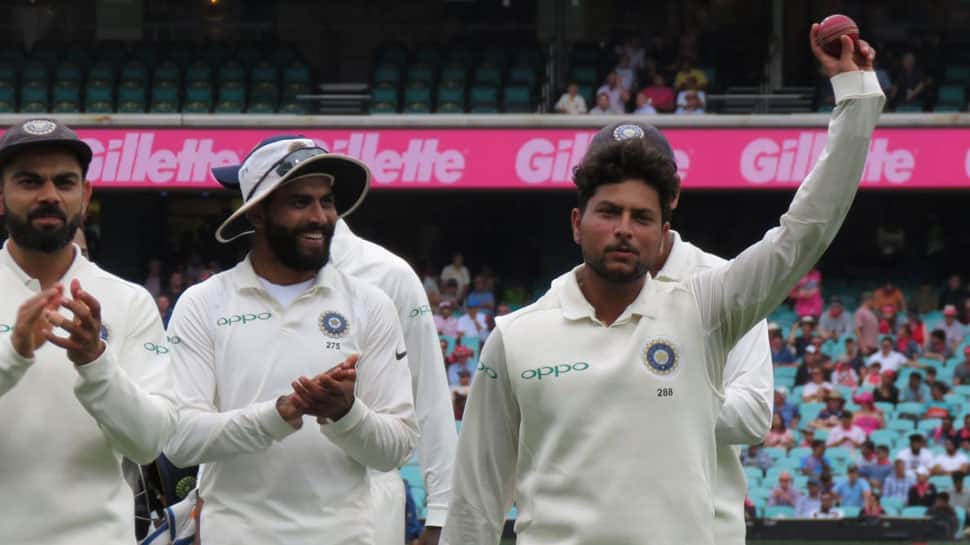 Australia reached 6-0 in follow-on against India before the bad light and subsequent rain played the spoilsport for the second time and abandoned the fourth day's play of the series-deciding fourth and final Test early at the Sydney Cricket Ground (SCG) on Sunday.

Peter Handscomb and Pat Cummins--who resumed the hosts' innings on the fourth day-- failed to display a similar kind of calm performance as they did on Saturday and were dismissed for 37 and 25 runs, respectively.

While Nathan Lyon went back to pavilion without scoring a run, Mitchell Starc (29 not out) and Josh Hazlewood (21) frustrated India for some time before the latter got out to wrap up Australia's innings.

For India, Kuldeep Yadav was the pick of the bowlers as he finished with a five-wicket haul. It is Kuldeep's first Test on Australian soil and he collected five for 99 runs in the same.

India, who posted a score of 622-7 declared in their first-innings, decided to enforce a follow-on.

At stumps, Australia were still trailing by 316 runs, with Marcus Harris (two) and Usman Khawaja (four) batting at the crease.

Earlier, bad light and rain delayed the start of the play before the entire first-session was washed out. There was some play in the post-lunch session, but bad light once again ended the day early.

UPDATE: Play on day four has been abandoned. Day five will begin at 10am AEDT with entry via a gold coin donation to the @McGrathFdn #AUSvIND https://t.co/CaiEbSjKbT

# Due to poor weather, the remainder of the day has been abandoned!

# The fourth day's play has once again been interrupted due to bad light.

# Australia made a cautious and slow start to their second innings, managing to score just six runs in the first four overs before the players of the two sides were forced to take early tea due to bad light. Australia 6/0 (4 overs)

An early tea has been taken due to bad light...

# Marcus Harris and Usman Khawaja have walked down the crease to begin Australia's second innings. Shami will begin the proceedings for India.

Harris and Khawaja make their way back out to the middle for the second innings... #AUSvIND pic.twitter.com/24jSSHI6XP

# Wicket! Kuldeep strikes again. The Indian spinner delivers a lengthy ball and it pitches outside off and raps on the pad of Hazlewood. The Australian goes for the review and that remains out. Kuldeep completes his five-wicket haul. Australia 300 (104.5 overs)

Review... OUT! Hazlewood given out lbw for 21 and he can't overturn it. That's five for Kuldeep! Super performance.

# Hazlewood (17) and Starc (24) are frustrating India and delaying them to wrap up Australia's first innings. Hanuma Vihari has been called into the attack, bu the visitors have  conceded some easy runs to the duo in the past five overs. Australia 291/9 (102 overs)

# Kuldeep missed a great chance to claim a five-wicket haul when the Indian bowler gets Hazlewood to mishit the attempted sweep in the 93rd over. However, Hanuma Viahri missed a simple catch at mid-on. Australia are still trailing by 350 runs. Australia  272/9 (96 overs)

Dropped! Kuldeep would have had a five-wicket haul after Hazlewood skied the sweep, but Vihari puts it down... #AUSvIND https://t.co/CaiEbSjKbT

# Wicket! Australia are now down by nine wickets after Jasprit Bumrah and Kuldeep Yadav strike in quick successions. Bumrah's delivery to Handscomb pitches just outside off, gets the inside edge of  the bat and goes onto the stumps. Meanwhile, Nathan Lyon tries the sweep off Kuldeep's delivery and the ball dips and hits his toe. Australia 258/9 (91 overs)

Out. Lyon is trapped in front by Kuldeep and he has to go without scoring. Four for Kuldeep...

Out. Bumrah gets his first breakthrough as Handscomb chops on for 37.

# Mitchell Starc is the new batsman in!

# Wicket! India get the early wicket they were looking for. Shami keeps low with the new ball and it scoots through under Cummins' bat and crashes into the stumps. The Australian batsman departs for 25. Australia 237/7 (85 overs)

Bowled. Shami gets one to keep low with the second new ball and Cummins is knocked over for 25.

# Peter Handcomb and Pat Cummins have walked down the crease to resume Australia's innings. Ravindra Jadeja to finish off the 84th over which was left halfway on Saturday.

# The fourth day's play is all set to get underway!

# The covers have been removed and the play is expected to begin in next 20 minutes!

UPDATE: Play on day four will begin at 1:50pm AEDT if there is no further rain and the light remains good! #AUSvIND https://t.co/CaiEbSjKbT

# Lunch has been taken in Sydney!

UPDATE: Lunch will be taken at 12:30pm AEDT with the covers still on at the SCG #AUSvIND https://t.co/CaiEbS29kl

# The start of the play will be delayed further after the rain is back and so are the covers.

# The rain has stopped and the covers are coming off. The umpires have done their inspection and if there is no further rain, play is expected to commence soon.

Update: The covers are off. The umpires have done their inspection. If there is no further rain, play will commence at 11:00AM (local) #AUSvIND pic.twitter.com/s2bOQWBbAf

# The start of fourth day's play has been delayed due to bad light and rain!

Bad light has delayed the start of play on day four at the SCG #AUSvIND pic.twitter.com/MhFHdcWbmd

Australia reached 236-6 in their first innings before rain played the spoilsport and called off the third day's play of the series-deciding fourth and final Test at the Sydney Cricket Ground (SCG) on Saturday.

At stumps, Australia were still trailing India by 386 runs, with Peter Handscomb (28) and Pat Cummins (25) batting for the hosts.

Earlier, resuming at the overnight score of 24-0, Australia made a decent start to their innings this morning as Marcus Harris pulled back a crucial partnership of 72 runs with Usman Khawaja for the opening wicket.

However, Kuldeep Yadav provided India with a much-needed breakthrough in the 21st over of the match when he dismissed Khawaja for 27.

Harris then joined forces with Marnus Labuschagne (38) and went on to stitch a 56-run stand for the second wicket besides also bringing up his second Test half-century.

Meanwhile, Travis Head stayed for some time at the crease, but didn't manage to add much runs to Australia's tally as he departed for 20 runs after facing 56 balls.

For India, Kuldeep Yadav was pick of the bowlers as he finished the day with the figures of three for 71, followed by Ravindra Jadeja's two for 62. Meanwhile, Mohammed Shami displayed a disciplined performance with the ball but managed to add just a wicket to his tally.

Earlier, India declared their first-innings at a gigantic score of 622 for seven after some incredible batting performances from Mayank Agarwal (77), Cheteshwar Pujara (193), Rishabh Pant (159) and Ravindra Jadeja (81).

Pakistan lose wickets in bid to fight back versus South Africa