Rohit Sharma plays down criticism from former players like Michael Vaughan and Mark Waugh when the duo termed the pitch as ‘sub-standard’. India batsman Cheteshwar Pujara had also defended the Chennai wicket and said it was not at all ‘dangerous’ and it was just a matter of the wicket offering some turn. 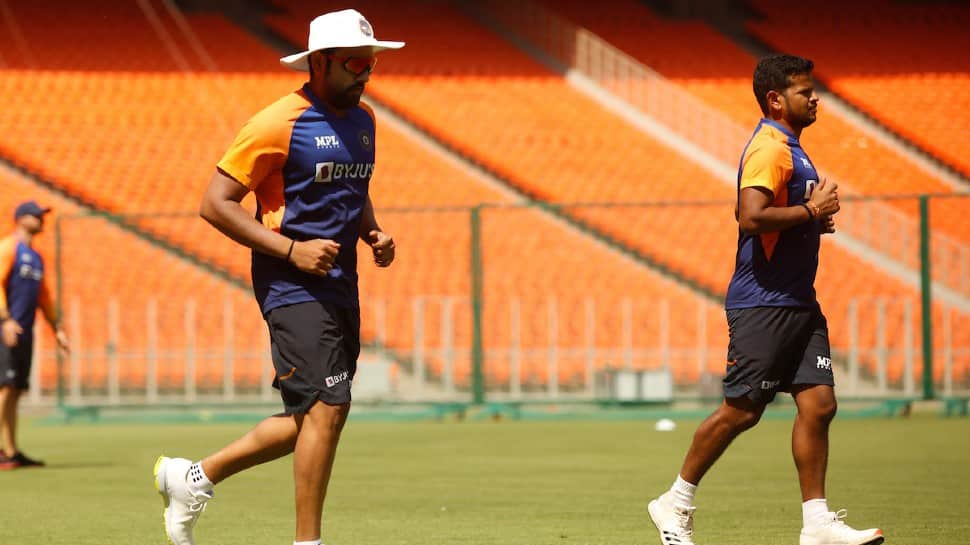 India opener Rohit Sharma (left) at a training session in Motera ahead of the third India vs England Test. (Photo: BCCI)
Share:
Edited By:

Indian opener Rohit Sharma on Sunday (February 21) said that there should not be much discussion about the pitches, rather the people should be talking about the cricketers and how they go on about playing their game. The four-match series between India and England currently stands level at 1-1 and now both teams will lock horns in a Pink-ball Test, beginning on Wednesday (February 24) at the Motera stadium. In the first innings of the second Test, Rohit had gone on to play a knock of 161 as India posted 329 runs on the board.

As a result of this knock, he also attained 14th position in ICC Test batsmen rankings. The second Test pitch led to some sort of criticism from former players like Michael Vaughan and Mark Waugh and the duo termed the pitch as ‘sub-standard’.

“Pitch is the same for both teams. I do not know why there is so much discussion about the pitch. Both teams play on the same turf and if people start talking about the pitch, I just want to say pitches in India have always been like this. I do not think there were any changes, everyone takes the home advantage, when we go outside, nobody thinks about us so why should we think about others? We should do things as per the preference of our team, this is what home advantage is all about,” Rohit Sharma said, during a virtual press conference on Sunday.

“If you remove the home and away advantage, tell the ICC to make rules regarding what the pitch should be. The same kind of pitch should be made in India and outside India as well. When we go outside, people make life difficult for us as well. I do not think pitches need to be discussed this much, talk about the players and their game. There should not be much discussion about the pitch," he added.

Further elaborating on his point, Rohit said: “As a batsman, I try to focus on adapting myself to the pitch conditions. This is the reason we all are here, there are many who want to play cricket but you are here because you understand the pitch conditions. There are chances you could fail but it does not matter as long as you learn from that. Our team prides itself on playing in challenging conditions, we never complain when we play on a challenging wicket outside India. To the experts, talk about the game, do not discuss pitches.”

On Saturday, India batsman Cheteshwar Pujara had also defended the Chennai wicket and said it was not at all ‘dangerous’ and it was just a matter of the wicket offering some turn.

“Sometimes you know when you are playing on a turning track, you find it difficult but at the same time, it was not a dangerous pitch at all. When the ball spins you know people find it difficult to score runs, especially the overseas teams. When we go overseas and we play on seaming tracks, the game finishes in three or four days. We still have to play on such wickets where there is a lot of grass or seam movement,” Pujara had said.

“In turning tracks, one cannot define how much the ball can spin. It is a very thin line in that way. I do not think it was a bad pitch, it always becomes difficult in the second innings, this is how it is. When we play in Australia, there are cracks on days four and five, it is a little dangerous, the oddball hits the crack and it might take off. As a team I do not think we had any issues, once opposition teams start playing more on these pitches, they will be fine,” he had added.

India had scored an emphatic 317-run win against England in the second Test of the ongoing four-match series. As a result, the series stands level at 1-1 and the Virat Kohli-led side has also reached the second spot in World Test Championship (WTC) standings.

IPL 2021: BCCI considering whether matches can be held in THESE two states