Team India managed to take eight wickets on Day 5 of the ongoing first Test but some late drama and stout-hearted performance from visitors' batters clawed back victory from the jaws of hosts. 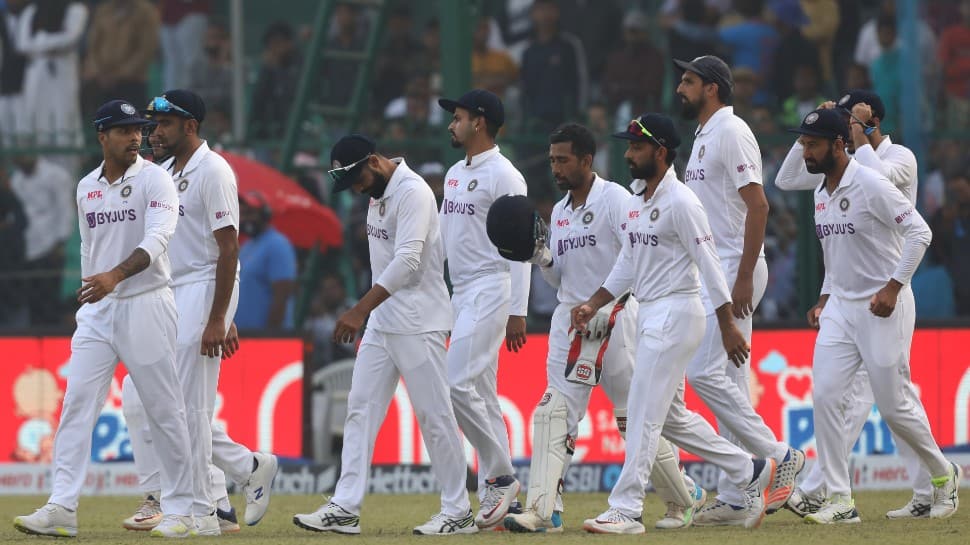 New Zealand managed to survive by the barest of margins on the last day of the first Test against India after a gritty performance from their lower-order batters and early stumps courtesy of bad light insured that visitors walked away with a draw at Green Park, Kanpur on Monday.

Team India managed to take eight wickets on Day 5 of the ongoing first Test but some late drama and stout-hearted performance from visitors' batters clawed back victory from the jaws of hosts.

So Near Yet So Far.

The first #INDvNZ Test in Kanpur ends in a draw. @Paytm #TeamIndia pic.twitter.com/dGckU0uBjl

Resuming the final session at 125/4, Indian bowlers clawed further deep as Axar Patel had Henry Nicholls adjudged LBW. Then after five overs, Ravindra Jadeja got the all-important wicket of Kane Williamson. The NZ skipper decided to go back and the ball skid on to trap him plumb in front. He departed for 24 off 112.

In the 79th over, Tom Blundell was bowled round his legs by Ashwin. India took the second new ball in the 84th over as the match reached the endgame. With the light fading and time running out for the hosts, Ravindra Jadeja struck in quick succession to send Kylie Jamieson and Tim Southee back into the dugout.

A dream start to his Test career and @ShreyasIyer15 is named the Player of the Match.@Paytm #TeamIndia #INDvNZ pic.twitter.com/BHbHwUz6b9

One wicket short, Indian bowlers threw everything at the batters on the pitch, Rachin Ravindra and Ajaz Patel. But Rachin who played 91 balls in the second innings ensured his side walked away with a draw as the bad light didn't allow the 12-13 minutes of play left in the day.

Earlier, Team India managed to take three wickets in the second session on Day 5 of the ongoing first Test against New Zealand here at Green Park, Kanpur on Monday.

At the tea break, New Zealand's score read 125/4. Will Somerville (36) was sent back to the pavilion by Umesh Yadav in the 36th over of the innings and this brought skipper Kane Williamson to the middle.

Latham however marched on and he brought up his half-century in the 51st over of the innings. Latham (52) was bowled by Ravichandran Ashwin in the 55th over and as a result, the off-spinner went past Harbhajan Singh's tally of 417 Test wickets. Ross Taylor (2) also failed to score big, and New Zealand was quickly reduced to 125/4.