In an exclusive interaction with Zee News English during a Facebook Live session, Shoaib Akhtar revealed the pain that Pakistan suffers due to their ‘no-win’ record against India in World Cups. In a freewheeling chat Akhtar revealed Pakistan’s probable playing XI, their strength and his opinion on MS Dhoni as mentor of Team India. 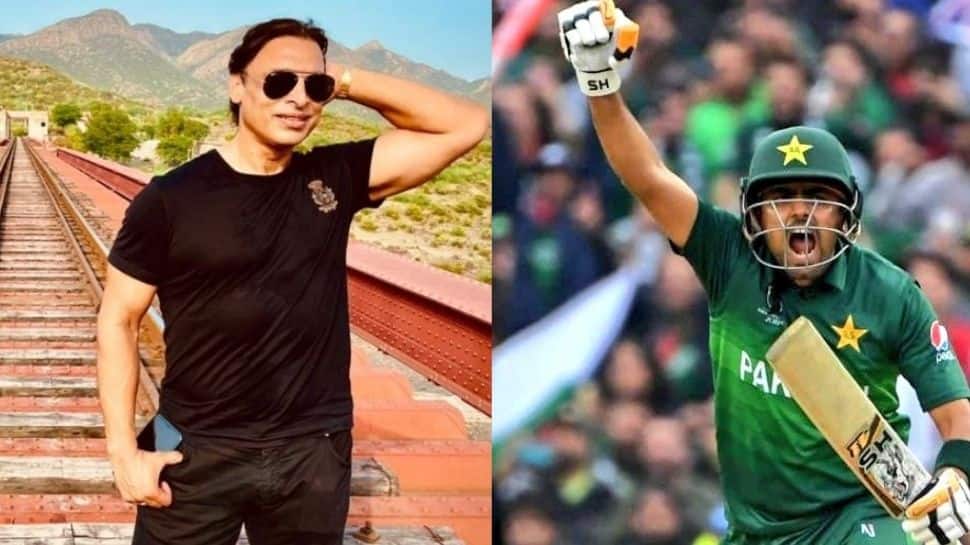 Former Pakistan paceman Shoaib Akhtar has had plenty of battles on the field with arch-rivals India during his playing career. Pakistan have never managed to defeat India in 12 encounters in 50-over or T20 format in World Cups. The two sides will face off again on Sunday (October 24) in Dubai in a high-voltage encounter.

In an exclusive interaction with Zee News English during a Facebook Live session, Akhtar revealed the pain that Pakistan suffers due to their ‘no-win’ record against India in World Cups. In a freewheeling chat Akhtar revealed Pakistan’s probable playing XI, their strength and his opinion on MS Dhoni as mentor of Team India.

Excerpts from an exclusive interview…

What do you think will be Pakistan’s playing XI against India?

What will be the playing 11 of pakistan against india that I can’t tell you because then you’ll get prepared! (laughing) Look the playing XI, I think is written on the wall – Shoaib Malik, Mohammad Hafeez, Asif Ali, Babar Azam, Mohammad Rizwan, Fakhar Zaman, Imad Wasim but Shadab Khan I’m doubtful about whether he’ll play or get dropped.

Moving on with 3 fast bowlers – Haris Rauf, Hassan Ali and Shaheen Shah Afridi alongside one or two spinners Imad Wasim. Pakistan will go with three spinning options Shoaib Malik will bowl 2 or 3 overs, Hafeez will bowl all 4 because he’s very a sharp and smart mentally and O really doubt what decision the selectors will make for Shadab Khan.

Both teams are familiar with the Dubai ground and its conditions, so which team do you think will take more advantage of that?

If you ask me about India so I’ll tell you that India have won before so they don’t need to come to Dubai (laughs). It’s pakistan who are coming to Dubai to play the match, so Pakistan’s motive you’ll know after the 40 overs of the match. But in my opinion it’s a 50-50 chance both the teams, India is being overconfident like it’s anything and mashallah their media will be the culprits if they lose because the amount of hype Indian media creates for India vs Pakistan.

The final training session before the start of Pakistan's #T20WorldCup campaign tomorrow.#WeHaveWeWill pic.twitter.com/u2T7X32cLJ

From both teams which set of players will have a great battle in the match?

I don’t think there will be any one-on-one battle of any players in this match, what I feel sometimes when an odd player like Fakhar Zaman fires, like he did against India in the 2017 Champions Trophy final. Till now we have not won any match against India in the World Cup so this a very big pressure point for us kind of feels like a stigma on us which should be washed away, not with ‘Surf Excel’ though but by playing good cricket against India and this ‘daag ache hain’ tagline of the ad is not right because ‘daag ache nahi hote’ (laughs).

I think we didn’t have that kind of strength in the middle-order but now with Ramiz Raja sahab as head of board we’ve got Shoaib Malik, Hafeez, Rizwan and Babar Azam and these players will give strength to the squad and it will be very important if they perform good. In my opinion, Sharjeel should’ve been included in the squad and Shadab could’ve been dropped and these two openers would’ve given a good start and comfortable situation to the batters coming in the middle-order.

What will be a safe score in this match?

I think 200 is a good score and is very important score in my opinion. But depends on the ground and pitch conditions too as it would be dry and dew factor will come in play when the ball crosses the boundary rope.

On the field, they spray a lot of things so the dew factor is not that much but outside rope it can come into play. There is decision that needs to be made from both sides that needs to made that either you bowl or bat first and that is the decision which will make you or break you because this is international World Cup not some IPL match or warmup match. This is the game where one side makes 170 plus runs the opposition will feel the pressure.

Which pace bowler will make the biggest impact on Dubai pitches?

We have made a strategy to aggressively attack the stumps and we would like to take wickets so this is the plan from Pakistan bowling that we are not going to holdback anything. India have a very long line of batters in their squad so you don’t wait for them to settle or give them a chance to settle and this is the only strategy which will help us or help India. So I think  sometimes it’s important to hold the batter with the field but both teams have good bowling and batting.

Although I think India’s batting average is little more because of the big batting lineup they have they can win the game but we’ll see that after 40 overs. Lateral movement will be there even in the second innings the movement of the ball will be there, I think the match start at 6 pm in evening so at that time there should be no issue.

What do you think about MS Dhoni as a mentor?

He’s a lucky man for India and he has that lucky charm trait, I hope his luck runs out this time.

India vs Pakistan Live Streaming ICC T20 World Cup 2021 Group 2: When and Where to watch IND vs PAK in India