Having bundled out South Africa for 275 to take a huge first-innings lead of 326, India decided to enforce the follow-on on the fourth day of the second Test on Sunday as they look to clinch the ongoing three-match Test series against the Faf du Plessis-led side with a game to spare. 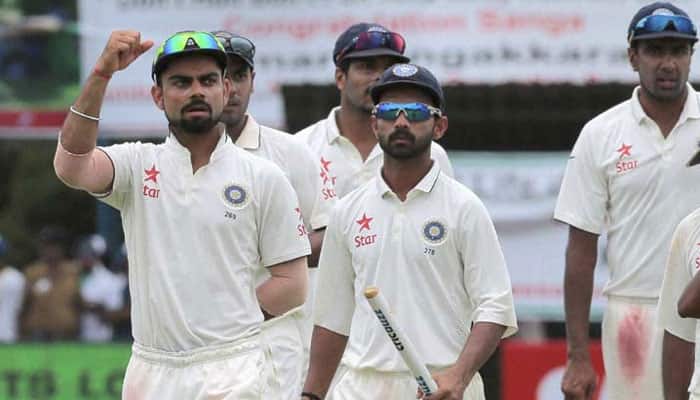 Umesh Yadav and Ravindra Jadeja bagged three wickets each as India defeated South Africa by an innings and 137 runs on the fourth day of the second Test in Pune on Sunday to take an unassailable 2-0 lead in the three-match series.

After being enforced follow-on, South Africa once again failed to counter India's bowling attack and were bundled out merely for 189 runs in their second innings. Dean Elgar was the highest scorer for the visitors with 48 runs while Vernon Philander (37) and Keshav Maharaj (22) once again showed resistance at the end of batting order.

Earlier, Virat Kohli became the first captain to enforce a follow-on against South Africa since 2018. The Faf du Plessis-led side was bundled out for 275 runs in the first innings to take a 326-run lead.

# India beat South Africa by an innings and 137 runs!

# WICKET!! Yadav strikes twice to resuce South Africa to nine wickets. While Philander (37) was caught behind the stumps by Saha, Rabada (four) was taken by Rohit Sharma at second slip. South Africa 189/9 (67 overs)

#  Virat Kohli to bowl an over. The last time the Indian skipper bowled in a Test match was against Sri Lanka in December 2017 in Delhi.

# South Africa added 14 runs in the last five overs. Just like first innings, Philander (29) and Maharaj (17) continue to trouble the Indian bowlers and delay the victory for the hosts. South Africa 172/7 (60 overs)

# 20 runs off the last four overs. Philander (18) muscled the second delivery of the 46th over down the ground for six before he whipped the very next delivery over midwicket for another maximum. South Africa 146/7 (48 overs)

# Keshav Maharaj is the new batsman in!

# WICKET!! Ajinkya Rahane pulls off a stunner at slip as Jadeja removes Temba Bavuma for 38 on the second delivery of the 44th over. South Africa 126/6 (44 overs)

# South Africa added 16 runs in the last four overs. Bavuma and Muthusamy are currently batting at their respective scores of 19 and seven as the visitors have now crossed the 100-run mark. South Africa 104/5 (38 overs)

# Nine runs off the last four overs. Bavuma (10) smashed the fourth delivery of the 31st over towards mid-off for four runs. South Africa 88/5 (34 overs)

# WICKET!!! De Kock (five) looks to go for a big slog-sweep on the second delivery of the 29th over by Jadeja, only to see the ball rattke the stumps. The visitors have now lost fifth wicket. South Africa 79/5 (29 overs)

# WICKET! Ashwin strikes again. Elgar (48) falls two run short of a Test half-century after being caught by Umesh Yadav near mid-off on the second delivery of the 26th over. South Africa 72/4 (26 overs)

# WICKET! Ashwin removes Du Plessis again. The Indian bowler tosses an offbreak on the third delivery of the 24th over and Du Plessis inches forward to defend it but gets an inside-edge onto the pad as Saha completes a catch on his fourth attemps. South Africa 70/3 (24 overs)

# South Africa added seven runs in the last five overs. Dean Elgar (43) continues to stand strong at the crease and is approaching a half-century while Du Plessis (5) is batting cautiously and is avoiding fall of another wicket. South Africa 66/2 (21 overs)

# 14 runs off the last four overs. Du Plessis taps the fourth delivery of the seventh over  down to fine leg using wrists and bottom hand to pick up two runs and get off the mark. The South African skipper and Elgar are looking to stitch a partnership after losing Markram and de Bruyn early. South Africa 35/2 (10 overs)

# Skipper Faf du Plessis is the new batsman in for South Africa!

# WICKET! South Africa are now down by two wickets. TB de Bruyn (eight) is taken by Wriddhiman Saha behind the wicket on the fourth delivery of the sixth over by Yadav. The visitors are still trailing India by 305 runs. South Africa 21/2 (6 overs)

# 13 runs off the first four overs. Elgar got off the mark by pushing the second delivery of the second over by Umesh Yadav to point for a single, while De Bruyn was dropped by Virat Kohli at third slip on the very next ball to open his account with a boundary. South Africa 13/1 (4 overs)

# WICKET!! Ishant Sharma gives breakthrough to India as early as in the very first over of the innings. Markram is caught leg before wicket on the second ball of the first over. South Africa 0/1 (1 over)

# Aiden Markram and Dean Elgar have walked down the crease to begin South Africa's second innings. Ishant Sharma to open the attack for India.

# Indian skipper Virat Kohli has decided to enforce the follow-on !

On Saturday, India bundled out South Africa for 275 runs in the first innings before umpires called for stumps on the third day of the second Test between two sides at the the Maharashtra Cricket Association Stadium in Pune on Saturday.

Resuming at the overnight score of 36/3, South Africa were reduced to 162 for eight prior to tea before Keshav Maharaj (72) and Vernon Philander (44) staged late fightback for their side by stitching a crucial 109-run stand for the ninth wicket.

However, Ravichandran Ashwin struck twice to wrap the innings for the Faf du Plessis-led side. The off-spinner finished with a total of four wickets.

While Umesh Yadav bagged three wickets, Mohammad Shami and Ravindra Jadeja chipped in with two and a wicket, respectively.

Earlier, Indian skipper Virat Kohli notched up his highest Test score of 254 besides stitching a huge 225-run partnership with Ravindra Jadeja (91) to guide their side to a first-innings score of 601/5 declared. Mayank Agarwal (108) and first drop Cheteshwar Pujara (58) were other notable contributors for the hosts.

Pune Test: India bundle out South Africa for 275 before stumps on Day 3